Hi, can someone here help me?

Your state’s DMV may be able to help you identify the owner.

To me it looks like an English Austin of the 40s.

Although I almost always agree with mountainbike, I am going to disagree this time.

While the 1940s Nashes did have a split rear window, for a 1940 Nash the tail lights are wrong, as are the bumper guards . Also, the proportions of the trunk are wrong, as the Nashes had a trunk that protruded more than this one does.

A possibility (although I am not very confident about this answer) is a 1940 Packard One Twenty sedan–one of the cheaper offerings from that marque.

I think the Austin’s boot would have hinges on the bottom. It dropped to make a platform that more things could be piled onto if the tiny boot was full.

To settle it, most car guys are more than happy to talk about their old cars. So a knock on the door and talk to the owner to ask to look at it.

Bowdoin Street didn’t mean anything to me, so I looked it up. Not a high class address, so the car is unlikely to be anything luxurious. It has one of the 1960s black and gold California plates, so that’s no use as a clue.

In the fifties they were gold with black but few cars kept those old plates even into my childhood years in the sixties, so the state must have offered replacements (I remember a few cars had the old ones, so it wasn’t mandatory.) Sixties cars are often seen with the original black and golds and seventies cars with blue and golds, but it’s a rare older car that has its original plates from before then. Unlike some states California hasn’t forced replacement of plates regularly, but they do fall off, rust, or get stolen eventually.

I don’t know how to do pictures but here’s a link to the 1940 120 Packard sedan. Sure looks very close except for the lack of trunk hinges, gas tank cap, and emblem. But these are customs so maybe redone. Neat cars. 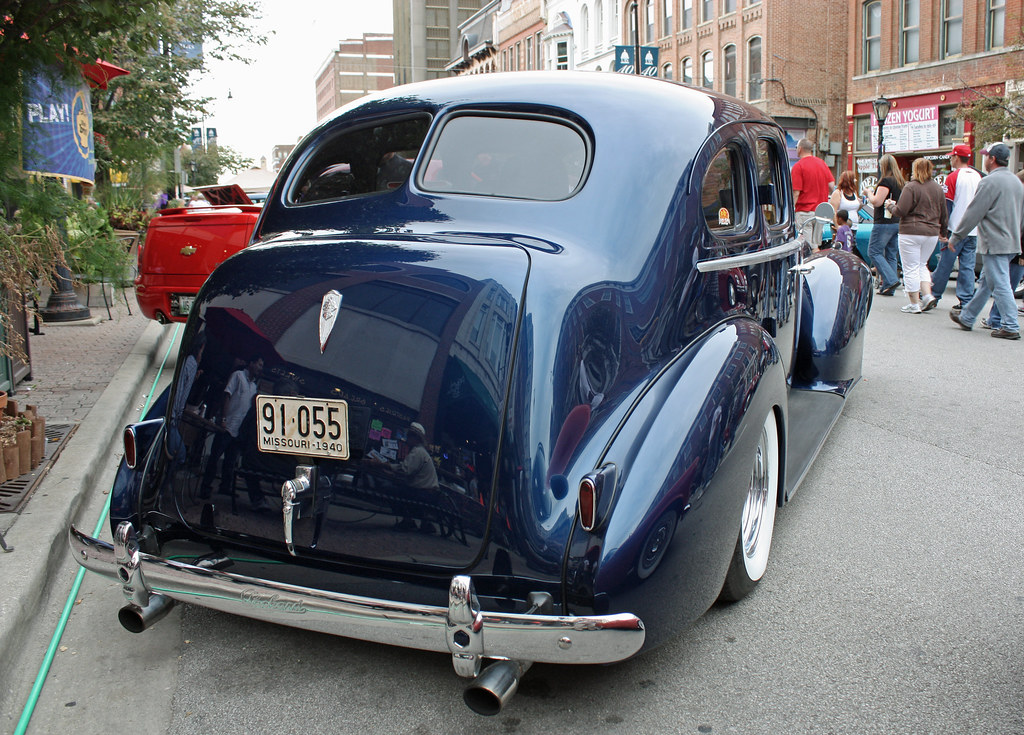 I believe from the tail lights, that the mystery car is a Packard. The closest I could come is a 1938. I don’t think that the 1939 and later Packards had exposed trunk hinges. However, the license plate on the 1938 in the picture I attached is too high and the trunk handle seems wrong.

I’m impressed. You guys aren’t do’n all this identifying from memory ? Definitly made for short people…is that the filler cap just above bumper level ?

My memory–especially regarding old cars–is still quite good, but I did have to refresh my memory (with books) in order to confirm my suspicion that it could be a Packard One Twenty sedan.
It helps to have a lot of reference books!

Dag, thanks for the laugh. “Made for short people” is a good one.

You may be aware that was the standard location for the gas tanks on the old cars, between the rails aft of the axle. That’s a typical fill location too. It wasn’t until the Pintos started catching fire in rear enders that gas tanks were all moved forward of the axles.

Actually, I was very impressed with the location of the gas tank on my father’s '66 Galaxie 500.
Unlike GM products of the day, these full-size Fords had their gas tanks mounted above the rear axle, about 4 ft forward of the rear bumper, thus giving it very good isolation from rear impacts. And, the gas tank was inboard of the rear wheels to the extent that it was also fairly well-protected from side impacts. That was the good news.

The bad news was that, when the gas tank sprang a leak, it necessitated removing the rear axle in order to drop the tank.

Now I’d love to know the story of that car. A Packard in that neighborhood? OK, it’s not the South Bronx (but neither is the South Bronx, or so I’ve heard), but it’s working class, at best. Hm, curious.

someone got a little extra cash to buy one and fix it up? Loans can be made for that kinda thing