Can’t figure out, is “Fordor” a misspelling of four-door, or a term used in those days and since lost?
ditto for “Tudor” for two-door? The prices are interesting, to say the least.

Or, perhaps that guy who wrote the ad was only semi-literate.
Maybe he was one of those people who spells “brake” as “break”.

“Ford” + “or” = “Fordor” Looks like that Ford dealer was just using it for everything.

If you look very closely at the very small print underneath the illustrations of these '38 Fords, you will see that the company refers to the “Tudor” and “Fordor” models. As I mentioned previously, these spellings were unique to Ford models. 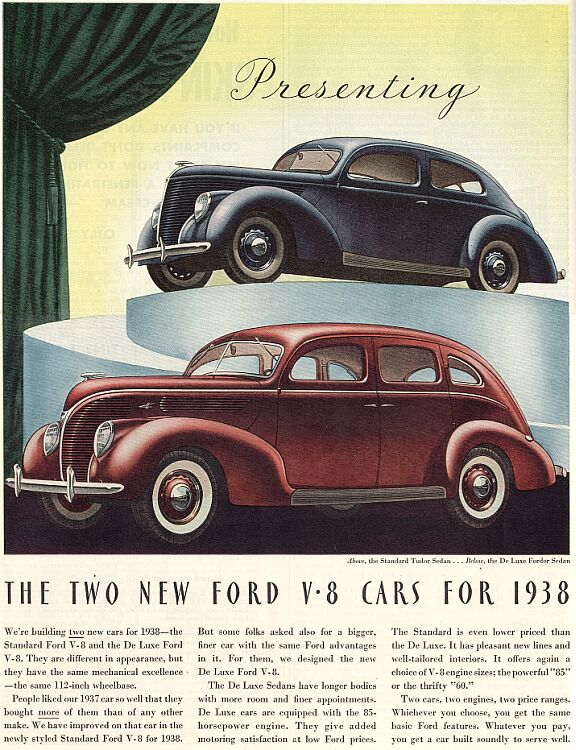 The term “tudor” goes way, way back well before the invention of cars, applied to carriages with two doors. The term, is also used for houses, and for garages that have double doors. Here’s an image of a tudor with two bearpower.

@BillRussell
Any idea what year the ad ran?
I like old phone number from a simpler era. A switchboard operator was standing-by, I’m sure.
CSA

no idea. probably 1951 or so, as these are apparently used cars.

The phone number is on a par with the misuse of fordor and tudor. It would only work within the exchange of the dealer, and the exchange is not listed.

@“the same mountainbike” - Is that a Concord Coach?

Circus coach.
Good point, though. Concord Coaches were one of the most common names around.

Oldest Ford brochure with “Fordor” I could find was 1925:

That’s about the earliest I could find too.

Some Of The Oldest Model Fords Must Have Been Nodors.
CSA

BillRussell: I also wondered why there was only an extension number listed. I still remember my parents phone number from the 1950s. The prefix was Empire so you dialed EM28218. Of course it was a party line.

texases: Thank you for confirming that my Father remembered correctly that his 1926 Runabout was $304 F.O.B Denver, CO. $14 for rail shipment was probably considered expensive in 1926!

That’s not an extension number, I don’t think. As recently as 1985 or so I lived in a small town where everyone’s telephone number started with the same 4 numbers, so all you told people was the last 3. As a kid in a bigger city we had 5 digit numbers until about 1953, when they came up with exchanges with names (Edison, Forest, Drexel, etc.).

That ad must have been in the early 50’s when people were madly buying the newly designed post war cars and there were lots of well used pre-war cars around. We got a 52 Dodge.

I think @wentwest nailed it - only 3 numbers needed for folks to know the number.