Hey, check this out…Very few of these in civilian hands. A Chevy (Holden) Police Pursuit Vehicle, (PPV). Remember the G8 Pontiac? Well here is its big brother…Not sold to the public in America in any trim, an individual private owner might have problems getting parts…This one is a former Colorado State Patrol Vehicle…

The Chevy SS has been on the market since late in 2013 but when they have sold only around 2,500 per year it can get overlooked.

I don’t honestly know why anyone would want one, but if that’s what you like, the more power to ya! It’s purely a matter of taste.

I remember reading about this car in Car and Driver, I believe.

At 100K, plus lots and lots of idling, it should be good for another 100K at the very least if not 200K. The engines are VERY durable. The transmission might need a re-build in 50-100K miles. Most mechanical parts would be available from anywhere. Body parts from GM, only, most likely but who wouldn’t total this car out if it got hit?

A G8 would be worth about $12K at this mileage so $6800 is not too far out of line but getting close. A Chevy version of the Crown Vickie cop cars. 4 Door V8 RWD sedan, what’s not to like?

“A Chevy version of the Crown Vickie cop cars”

The Crown Vic was body on frame

This thing is not, and it’s also not produced in nearly the same numbers as the Crown Vic was. And it won’t be around for as long, either

The Crown Vic was body on frame

@db4690 … I don’t see how that makes them any more durable than unit construction cars. Unibody Dodge and Plymouth police and taxi’s were all over the country in the 60’s and 70’s rolling up 100K+ miles in cars not nearly as rust resistant as today’s cars.

Agreed that there aren’t nearly as many of these produced compared to the extremely long run of the Panther platform cars but I’d say the durability is there. The Aussies built these to survive their rough outback and they will have a long service life after police use.

I think it’s a pretty cool car no matter how many mounting holes it’s peppered with and I like the color combination also.

It’s somewhat ironic that the car may have been serviced or cleaned up by the inmate who may have ridden in the back at one time while in cuffs.

WTH . . . I did NOT say the Crown Vic was more durable than the PPV, because it was body on frame

All I really said was that the PPV was not exactly comparable to the Crown Vic, for the reasons which I listed

Seems to me, you’re reading into my statements a little too much

“they will have a long service life after police use.”

Perhaps, but probably not in great numbers

I might be wrong eventually, but it will take years to prove me wrong

There are quite a few cities that are not using cars like the Crown Vic for taxi use anymore. That means scratch one major fleet buyer off of the list

And the PPV isn’t as heavily represented in the law enforcement community as the Crown Vic was. There are more choices now. It seems for a time, after the body on frame Caprice disappeared, all police forces were using the Crown Vic. They are not the only game in town now, and things are changing. The PPV will never have a monopoly

I respect your opinions, but to a large degree I don’t agree with them. Or at the very least, it’s way to early for me to agree with you

The are built in Australia where they are called Holdens…The factory that builds them is closing in 2017…The “standard” engine is a 330hp DOHC direct injection V-6 …In an effort to improve fuel economy the 6L V8 drops to 4 cylinders when cruising at a steady speed…In the car being auctioned, they sure made a mess out of the center console when they removed the police equipment…When they were selling the Vics, they went for $3200 - $3500…Looks like the Chevy has more fan interest…

I was surprised to see the Chevy SS on the showroom floor when I took my Impala SS’s keys in for the ignition key recall. It’s not an IMPALA SS it’s a CHEVY SS. I recognized it as a G8 clone right off the bat.

Notice I didn’t take the car, just the keys. They put the plugs in the keys while I went down the street for lunch.

@db4690 Sorry 'bout that… I think I was a bit confused about what you meant.

I agree with you that we will never see the numbers and maybe not the long life we’ve seen from Crown Vic. Time will tell on longevity but I think the correct pieces are in place to allow this car to rack up high miles.

I’ve very rarely see the Chevy in service as well. I’ve seen far more police Tahoes than these. The highway patrols seem to have embraced the Chargers as a replacement. My local sheriff, too. It will be hard to wean law enforcement off RWD V8 sedans. They’ve been very resistant to the FWD cruisers from the Big 3. They’ve all tried them; Impalas, Taurus’ and Intrepids. Cabs, as you say, seem to be heading towards hybrids and mini-vans.

Here is what the latest version of these Chevy PPVs look like in NJ, complete with a “stealth” paint job: 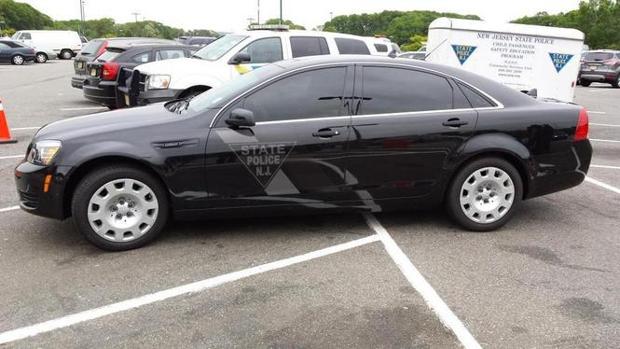 Poll: Will tough-to-spot N.J. State Police 'ghost' cars cause you to slow down?

The State Police unveiled a new "ghost" car that will be patrolling the Turnpike. The black Chevy Caprice appears to be unmarked, but up close, the frosted logo of the State Police can be seen. What do you think of this new tactic?

All auto assembly in Australia will cease soon. The models that GM chooses to continue will be built elsewhere, like South Korea. Production costs are too high to continue building cars in Australia.

The Chevy SS and the Caprice PPV are not identical platforms. I think the Caprice has a 3.5 inch longer wheelbase and is 6" longer overall…Buy the way, that 2011 Colorado State Patrol car that was being sold on eBay brought $7300.00 It had 102K miles on it…

When somebody mentions police and Ford Toreass, I remember the Robocop movie

In my neck of the woods, law enforcement also seems to like the Yukon/Tahoe and the Charger

Another possible reason . . . the 722.9 7speed was/is a troubleprone unit. In my opinion, anyways. It came out for the 2004 model year, and I left the dealer in 2009. Every single model year that it was around, and I was at the dealership, it was problematic. Maybe they finally “figured it out” . . .

Teething problems are maybe one or two years, not 6 years or maybe more

The police departments in my area use either the Dodge Charger or the Yukon/Tahoe exclusively. I did see an old Crown Vic a couple of weeks ago in police colors, but the doors had “liaison” marked on the side, so I’m assuming it’s a department “beater.” It looked pretty tired.

In my neck of the woods, the local and county forces still use a mix of Crown Vics, Chargers, and some newer Explorers and Tauruses. While the state troopers are being given some new Chevy PPVs, most of the troopers are still driving either Crown Vics or Tahoes.

I still have two of the Crown Victoria P-71 models (cop cars) . As far as driving comfort and reliability, cost per mile to operate, still, nothing comes close…The Caprice Police (PPV) has everything the cops want in a cruiser, and more if they opt for the 6 liter engine, but police departments are not going to change over to a car that is slated to go out of production shortly. So at the moment they are trying a little bit of everything…The list price on the Caprice PPV was $31,000…That’s 4 or 5 grand cheaper than the Vics. A bargain price for sure…

The Holdens got good reviews and even Top Gear liked them in a comparison. If you can get a used one in a few years, it would be a bargain I think. But I think they’re kind of butt ugly myself and the Pontiac G8 even more so.