Can lower octane high altitude mountain grade gasoline be used with EFI or a turbo? 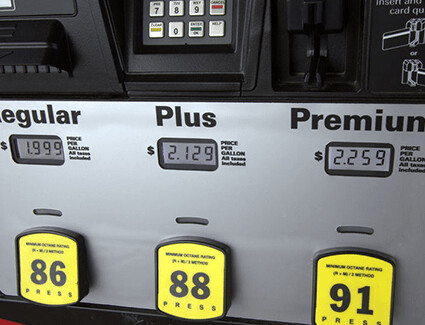 This all makes sense in an engine with a carburetor and nothing more than a simple mechanical timing advance. These engines have no concept of what the manifold air pressure or flow rate actually is.

The issue is that cars with computer controlled spark advance and fuel injection constantly adjust the ignition timing. A engine control computer knows the air flow rate and / or manifold pressure and advances the timing with the assumption that the minimum required fuel, such as 87 octane, is used. At partial throttle, the timing can be advanced more than at full throttle due to the low cylinder pressure that the computer is designed to take in to account. If the vehicle has a turbo, the manifold pressure could be just as high as if it were at sea level.

I have a question regarding gas (no, not that kind of gas, but gasoline). I used to live in a lower altitiude area where the low grade gas was 87 octane, but I moved to a high altitiude area (4,000 feet) and the low grade gas here is only 85 octane. I have heard that with the higher altitude and thinner air that you can use a lower octane gas and the cars run just fine. I have done some research on the subject but haven’t found anything definitive. My question is that both of my cars requite…

Yes, no problems… because the car is smarter than the driver. Octane requirement has nothing to do with whether the engine has fuel injection or a carb. FI is smarter than a carb because closed loop control maintains stoichimetric conditions from sea level to Pikes Peak. A carb can’t do that.

The ECU will reduce the turbos boost pressure if needed. All dynamically controlled in real time.

OK , does this Snowman character live in Chicago or Colorado . Doesn’t really matter because Trolls can come from both places .

OK , does this Snowman character live in Chicago or Colorado . Doesn’t really matter because Trolls can come from both places .

Volvo:
There will always be discussions that many of us are not interested in.

It does not matter how much you like or dislike the posts that people make. None of us has the right to directly criticize a contributor.

TheWonderful90s is entitled to contribute equally as much as you are.

Doesn’t the MAP and MAF attribute the changes needed to compensate for altitude differences?

Doesn’t the MAP and MAF attribute the changes needed to compensate for altitude differences?

The owner’s manual for my '15 Forester doesn’t mention a different octane rating at high altitudes but apparently the current Ford F150’s manual does.
Here’s Why You Shouldn’t Be Using 85 Octane Fuel (jalopnik.com)

My son had a newer Jeep with the 3.6 efi motor and it died at 12,945 elevation on way to pikes peak. He had to do a U turn and go back. Ran fine at lower elevations. Issue? Well, he sold it.

when I lived at 6000+ feet the standard grade gas was 85 octane. At near sea level in San Jose standard grade gasoline is 87. On modern cars, esp those which use an MAP sensor, the computer knows what its altitude is, and can compensate its engine parameters accordingly. Not sure what happens if no knock sensor & it knows the altitude is 6000 feet, adjusts the parameters accordingly, and engine starts to knock b/c it is using 85 octane & too aggressive w/timing. I’m guess if it knows the altitude is 6,000 feet it presumes the gasoline is 85 octane so it won’t knock. It’s a good question though.

Reminds me of the German car (Mercedes I think) that the Car Talk caller from Portland Oregon had a complaint about. Car would stall out, stop running entirely, every time driving up a mountain road when it hit 3500 feet. Eventually her mechanic figured out the car’s computer changed the engine parameters at that altitude, and the change involved activating a component that had failed. Component not used below 3500 feet.

Here’s one data point.
A relative has a Honda CRV with the turbo 4-cyl and lives in Denver.

Her car calls for 87 octane, at sea level. She wondered what to use and asked the dealer. The dealer responded saying most use 85 at that altitude.

She tried several experiments with both 85 and 87, and concluded her car runs much better on 87 in the greater Denver area (5K’) and in the mountains. Better pickup and slightly better gas mileage.

I’m guess if it knows the altitude is 6,000 feet it presumes the gasoline is 85 octane so it won’t knock. It’s a good question though.

If the car has a MAP sensor, there is no way it would know that you drove it up to high altitude unless you shut it off and restarted. You’re supposed to shut it off to refuel, so maybe that’s when it could assume 85 octane was used.

Turbos were developed for aircraft piston engines so they could increase performance at high altitudes. It compensates foe the low density and reduced oxygen. Fighter aircraft were the first users.

If the car has a MAP sensor, there is no way it would know that you drove it up to high altitude unless you shut it off and restarted.

The computer will detect knocking and adjust, resulting in reduced performance.

Reduced performance and gas mileage. The other problem is if there’s a problem with the knock detector. If there is and you accelerate hard, and it doesn’t retard the timing, there could be serious engine damage. Use the appropriate octane.

The other problem is if there’s a problem with the knock detector. If there is and you accelerate hard, and it doesn’t retard the timing, there could be serious engine damage.

If there is no signal from one of the knock sensors a fault will be set, some vehicles will go into reduced power mode and will not be drivable. The cost to replace knock sensors on a V6 or V8 engine can range between $1500 and $3000 because of the location.

Use the appropriate octane.

Have you begun using premium fuel in your Lexus? Last time this came up, you didn’t care.

For what it’s worth, my prior and current Lincoln Mark requires 91 octane. It runs fine on 87 here in OK with no loss of power, mileage, or pinging. During multiple trips to CO I use mountain grade 85 octane and the same situation exists. No loss of power or pinging but fuel mileage goes up 1.5 to 2 MPG at altitude.

With a boosted car (super or turbocharger) I would be very hesitant to use a lower octane fuel. An engine can disintegrate quickly if the driver is not astute enough to notice the warning signs.

Aircraft engines are a different deal. The compression ratios on those engines are very low compared to automotive engines and Avgas still has lead in it. They are more similar to my 1944 Harley flathead at 5.5 to 1 C.R. Some go a few points higher and some WWII various Wasp radials used water/methanol injection while even later jet aircraft such as the KC -135 and B-52 also used water injection. At an airshow here some years ago a low flying B-52 poured the coals to it during a low speed/low altitude flyby and hit the water injection. Quite a sight to see.
Even the WWII era German FW-190 used water/methanol injection and picked up about 400 horsepower during those need it right now or else moments.

Aircraft IC engines also by necessity need to operate at lower RPMs; ergo, the use of gear reduction on the props. If the prop tip speed starts getting near the speed of sound bad things begin to happen as far as noise, efficiency, and fractures of critical parts.

I was looking in the owners manual (OMG, what is that🤪), under fuel requirements Ford states engine damage related to use of 85 octane gas may void the warranty. Where 85 octane is sold, Ford does state to use 87 or higher rating.

High altitude 85 not a problem with NA engine.
While turbo setups can compensate, I would stick with 87 so it doesn’t become as gutless as NA.

If there is no signal from one of the knock sensors a fault will be set, some vehicles will go into reduced power mode and will not be drivable.

How does that happen? There’s another sensor sensing if there’s a knock that the knock sensor is missing?

Have you begun using premium fuel in your Lexus? Last time this came up, you didn’t care.

You read that wrong. We use premium, But it’s no big deal if it’s not used all the time. And if not using premium we know not to do hard acceleration.

My understanding is that lower octane in non-turbo cars works at high elevation because the maximum compression is reduced by the reduced air density. For a turbo car that’s not the case, its maximum compression is set by the turbo control system, which doesn’t reduce that at high elevations. So I would use the same octane in a turbo car, Dallas or Denver.

As @Mustangman mentioned, all this technology goes back to aviation. The Messerschmitt Bf-109 had both supercharging and direct injection in its Mercedes engine at the beginning of the war (1939). The direct injection gave them an advantage over the carbureted Spitfires initially in dogfights because the carbs didn’t work well in all maneuvers.

Supercharging goes back to 1923 in cars, Mercedes introduced it. I can’t find when it was first used in aircraft, but it was highly developed in the 1930s.

Harry Miller used supercharging extensively in his race cars in the 1930s. They also had DOHC and 4 valves/cylinder. Very advanced.