Long story short, my 2001 mustang has been carbon fouling the spark plugs only on the drivers side, specifically plugs 3 and 4. No codes throughout this whole ordeal so I’ve replaced many potential parts that could cause a rich condition (because carbon fouled plugs almost always indicate a rich condition) I’ve done the MAF sensor, both o2 sensors, fuel injectors and fuel pressure regulator. However after replacing almost every potential part, the plugs were still fouling.

I took the car to a garage that did a full diagnostic. Upon putting a boroscope in cylinder 4, there was a large line on the computer monitor showing what looked like a crack in the piston. Upon doing a compression test, compression levels were “excellent” so they said the line they saw was actually a large amount carbon buildup on the piston and cylinder.

They also did a vacuum leak test and there were no leaks found.

What’s even more baffling is that the fuel trim was actually reading LEAN and not rich. This does not make any sense, due to the plugs getting repeatedly carbon fouled which would indicate rich not lean…They claim the fix is to clean the EGR passages and do an induction system clean as well…In response to my question they said there is so much carbon in the cylinders and EGR passages that it’s causing carbon to appear in the spark plugs and a lean condition is due to there being so much carbon in the EGR passages that not enough fuel can be delivered, hence the lean condition. While this sort of makes sense on paper, this car is an enigma to say the least… Does this seem like an accurate diagnostic?

I am tired of having to remove and clean the plugs or replace them twice a week. On another note, when I put a clean plug in cylinder 3 and 4 the car runs beautifully for a couple days then the misfire comes back due to the carbon deposits.

If you hear air rushing out the dip stick tube, cracked/burnt piston.

It’s impossible to have a cracked piston if the compression levels are good though isn’t it?

A compression test is a dynamic test. Which means that the piston is used used in a rapid up and down motion along the valve action to measure pressure in a cylinder.

A cylinder leak may not be detected by this test.

A leak-down test is a static test.

This means that the piston and valves for that cylinder remain in a position without moving to seal that cylinder to determine if that cylinder has any leaks when compressed air is applied.

Which engine is in this Mustang?

fouling the spark plugs only on the drivers side,

Yes it’s a 3.8 v6. Could a leaking cylinder cause the plugs to foul?

Crankcase gases leaking into a cylinder?

my mechanic said “if the compression is good then a leakdown test isn’t needed.

From what I read that explains it well is “A compression test is like a general check-up with your doctor. It checks the basics and look for abnormalities.”

“A leak-off test is a specialist test to find the cause of the abnormality. If you find a cylinder with low compression, a leak-off test will tell you why. If air leaks out of the exhaust or intake manifold, a valve is leaking - cylinder head repair required. If it leaks out of the oil cap/PCV system, rings are allowing excessive blow-by”

What’s even more baffling is that the fuel trim was actually reading LEAN and not rich. This does not make any sense, due to the plugs getting repeatedly carbon fouled which would indicate rich not lean…

The pcm is recognizing a lean condition

It attempts to compensate . . . by commanding more fuel, to the point that the plugs are fouled

So if I were you, I’d figure out what is causing the lean condition and correct it

My guess is the fuel trims were +25% or something along those lines. That’s a heck of a lot to compensate for. PCM tries to compensate, and the commands more fuel as I already mentioned

In my opinion, when that lean condition is fixed, the plug fouling will stop

So here’s a question for you, and this has nothing to do with actual fault codes

Once you report back to us with those numbers I asked for, we’ll be able to further help you

The mechanic doing the diagnostic said the lean condition is being caused because of the carbon buildup in the EGR passages/orifices which is partially blocking the flow of fuel. He said if he cleans the EGR passages and does aN induction cleaning service, the fuel trim should go back to normal and the plugs should stop fouling. Does this seem right? I just wanted to check here before i spend the money and go through with the repair

Yes, if the EGR problem . . . assuming there is a problem, because I’m not sure how your mechanic arrived at that conclusion in the first place . . . is the cause of the lean condition, then fixing it will restore fuel trims to normal and should take care of plug fouling

How are they proposing to fix the EGR passages?

It should be quite easy to verify EGR functionality with a pro-level scanner and a smart guy using it. If the guy is halfway decent, he’ll know if everything is up to snuff, or there is indeed a problem, in regards to the EGR

I hope that has already happened, hence the recommendation to clear EGR passages . . . ?!

Yes he was using a pro level scanner.

The EGR was functioning but i’m not sure how he determined the passages were clogged. He said we’d find out when taking off the manifold if there is carbon build up and if not, then we’d have to continue doing the diagnostic

But if there is carbon buildup present when we remove the manifold then we would have definitely found the problem. I suppose he determined that was the most logical cause given i’ve already replaced the usual culprits (o2 sensors, fuel filter, air filter, MAF sensor, injectors, Fuel pressure regulator, coil pack, wires) and the plugs are still fouling

OK. First off 3 and 4 are on opposite sides of the engine. 3 is rear on passenger side and 4 is front on driver side.
On this engine it is possible for plugged EGR passages to cause misfires on only one or two cylinders, but this is easily verified by operating the EGR and monitoring cylinder contribution. If that is in fact the case the only way to correct that is to remove the upper intake and clean out all 6 EGR runners. But I’m not sure that’s what happening.

If the spark plugs are carbon fouling are you saying they are black with fuel or do they have actual carbon stuck to them? Because that would in indicate oil fouling.

Can you post a pic of a fouled plug?

They are definitely carbon fouled. They are matte black and two mechanics have confirmed they are carbon and not oiled fouled. Only the plugs on the drivers side are fouled and only one of them is fouled very bad to the point where it misfires. 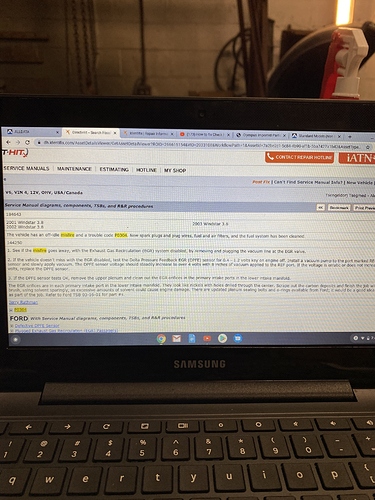 This is basically what he did