Bye-bye to the so-called "Smart" car 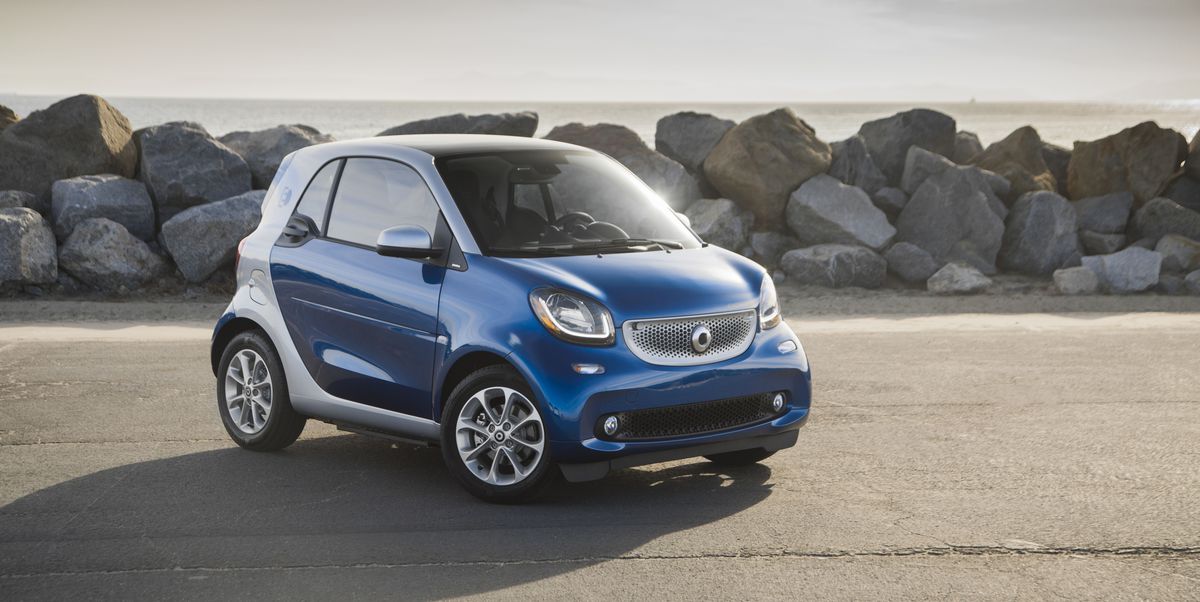 The Smart Car Is Officially Dead in the U.S.

The electric Fortwo, which was the only Smart model still for sale in America, is going away at the end of the 2019 model year.

Considering the minuscule sales in the US, will anybody notice its absence?

Sort of like when Peugeot quietly slipped out of the US market.

Exactly!
And, the earlier PREMIUM gasoline models had one of the worst frequency repair records in the industry.

I don’t know how minuscule the sales numbers are, but I see them around, sometimes towed behind smallish RVs.

I see them around

On average, I would say that I see one about every 10 days or so. In an area where Porsches abound, and where I see one or two Maseratis per day, that would seem like pretty paltry sales figures for “Smart”.

I never understood the market for this car. It’s so small you’d think it would get phenomenal gas mileage, but it doesn’t. The Honda Civic (non hybrid) gets slightly better gas mileage and it’s about twice as large. Smart Car is only a 2 seater and not very powerful. I don’t know why anyone would buy one.

I’m with MikeinNH on this…I could never see why anybody would want one. It looks like you could only afford half of a car, and the gas mileage isn’t that great.

A friend of mine owned one and let me drive it a few times. It wasn’t as cramped as I thought it would be (I’m 6’). That’s about only good thing I can remember from it. Ride was terrible, driving on highways was terrifying, I thought it was very underpowered as well. I won’t miss them disappearing from the US Marketplace. Although I can imagine we’ll get some more “do you think I should buy one, it’s got really low mileage!!” posts over the next few years

The Smart For Two makes me think of the Isetta that was imported in the the 1950s. The cars are about the same size. A regional drug store chain raffled off a new Isetta in a promotion. The lucky winner kept the Isetta less than a month and then traded it in at the local Chevrolet dealer. The daughter of the owner of the Chevrolet dealer attended the same high school I attended. She drove the car to and from school as a lark for about a month. When the novelty wore off, she was back to driving used Chevrolets off the lot.
I think once the novelty wore off on owning a Smart, the already miniscule sales dropped to zero.

A friend of mine owns one that he hauls in a trailer to snowbird in AZ. Really terrible suspension and transmission but he only owns it because it fits in his trailer. The only reason I can see to own one is because a really small car is needed. My old 93 Suzuki Swift (Geo Metro) is huge in comparison.

I never understood the market for this car.

Early commercials marketed it as being small enough to park in spaces not big enough for the average economy car, literally backing into a parallel parking spot and not sticking out into the street.

If finding a big enough parking spot for a full-size car is an issue for you, this would solve it.

As a motorcyclist, I can testify that being able to park in tight spots and in unconventional places has its advantages.

Early commercials marketed it as being small enough to park in spaces not big enough for the average economy car, literally backing into a parallel parking spot and not sticking out into the street.

I agree it’s a possible reason…however I’ve never had a problem parking my SUV’s or wifes Lexus or Accords even in Downtown Boston or NYC. Maybe some people see the need…but I surely don’t.

I used to use these quite a bit when I lived in DC…they were the base vehicle available for rental through Car2Go (a similar platform to Zipcar). Then I took a tour of IIHS’s crash test facility a few years ago and saw one of these absolutely destroyed in a moderate-speed head-on collision with a VW Jetta. Haven’t driven one since…

It was a joint venture with Mercedes and the Swatch Watch company. Mercedes bought Swatch out a few years into production. They had a novel manufacturing process that basically bolted together a number of very large sub-assemblies to keep assembly costs very low. Didn’t really work quite as planned. Neither did the Body Panel Updates planned. It was supposed to be easy to change color on the car with easily detachable body panels. No one really did it.

That’s interesting, as it’s the recommended method for parking a motorcycle, particularly where the roads aren’t level and you don’t want your motorcycle to be easily knocked over.

That’s a VERY efficient use of parking space, IMHO. I always did that when street parking my bikes.

A small tourist town near my old home in Ohio passed an ordinance making that illegal for bikers for some strange reason. The bikers complied with the new ordinance and locked out ALL the parking in mid-town by parking parallel. Business owners screamed bloody murder and the ordinance was repealed post-haste!

Manchester and Concord NH actually went removed their parallel parking spots on the major roads downtown and installed parking spots where you part at a 45 degree angle to the curb. They can get a lot more cars parking on the street. However it’s a royal pain to pull out when you have a cargo van parked next to you.

Or a big SUV ( or a 3 wheeled bicycle) when you are in your Smart car!

Backing out from spots like that have sold me on backup cameras. They don’t allow you to see everything you need to, but they at least give a little view of approaching traffic.