There is so much plastic on these newer cars. A Power Wheels is built stronger than the front end on these cars.

Go to the salvage yard and it is hard to find front end plastic parts where some of the fasteners aren’t torn out of the holes on some parts of the plastic.

Someone drove this car up a curb or something. It took out the left side of the collision strip cover (aka bumper cover), the bottom splash shield, and probably the left wheel splash shield. The lower radiator support is broken in half and the radiator is bent almost enough to leak. Does the 2012 Fusion have the AC condenser built in to one radiator or something? Because I don’t see a condenser.

A Power Wheels is more rugged!

I reached in the door and touched the lower door beam. It’s a thin piece of channel with the ends of the flange part flattened out a bit, that is made out of what looks like 16 gauge steel. I can twist it with my hand. This is supposed to hold up in a collision?

This is supposed to hold up in a collision?

The door beam is meant to take force in particular directions and then to deterministically deform as part of the overall structure to protect the passengers. It’s not supposed to “hold up” in a collision. Just the opposite. You can bet there has been thousands of hours of simulation and empirical testing to prove it performs as intended.

What makes you think any part of the car should be designed to “hold up” in a collision? Actually, the opposite is true since around the 1980s. For a few years prior to that, they were designed to disintegrate into rust dust

If the car is designed to crumple in an accident to absorb the force of impact and protect the passengers, what good would having the plastic pieces survive?

Here’s a test for you. See how thin gauge that beer can is? Now place one end on your forehead and try to crush it in a single straight on blow with your other hand. When you recover from the pain, try putting a tiny dent in the side and repeat the experiment…

How to waste time 1. Reading anything by the Snowman 2. Trying to explain why he is wrong most of the time.

I tried to twist the door beam on a Volvo 850. That thing is like 12 or 14 gauge steel S shaped channel from some ultra high strength alloy. It wouldn’t twist at all.

Here is one that got hit. Unfortunately they removed the door. Volvo Side Impact- ICU Lafayette Colorado

My daily driver used to be 30 year old Corolla before Covid complications, very rugged, fairly high from ground front bumper. One day decided to rent a new Corolla for a long road trip, plus give me some experience , should I want to buy a new Corolla someday. First problem, during the entire week I had it, could never figure out how to work the headlights … not a problem, drove it during the day … I’m sure I could have eventually figured headlight situation out, but the front end of that car was the real problem imo. The lower section of the nose was some sort of plastic material, and it sat very close to the ground. I kept pumping it into curbs. If that car was my daily, pretty much 100% chance I would damaged that front section by bumping into a curb, and it appears like it might be pretty expensive part to replace.

Look even a compressed air blast takes the bumper cover off a plastic car! 200 Incredible Moments Caught on Camera - YouTube

If that car was my daily, pretty much 100% chance I would damaged that front section by bumping into a curb,

Does your Corolla have hooks for a towing that come down below the splash shield through slots in the plash shield in the front? If so if you go up a steep driveway or something and bottom out, it will hit those before the bottom of the bumper cover is hit.

how to work the headlights

Was the owner’s manual in the car? If it wasn’t in the glovebox, it may have been in the trunk. Most rentals I’ve had in the last few years had the manual somewhere in the car. You could also download it of course.

. The collision strip cover is all plastic. What used to be some energy absorbing foam in most cars is now some plastic cone shaped pieces.

The energy absorbing foam is under the plastic. It’s been like this since the late 80’s for most unibody passenger cars. Body on frame is more likely to have metal bumpers,

This is supposed to hold up in a collision?

It’s supposed to deform and dissipate energy in a collision. Not transfer it into the cabin/occupants.

I tried to twist the door beam on a Volvo 850. That thing is like 12 or 14 gauge steel S shaped channel from some ultra high strength alloy. It wouldn’t twist at all.

You can’t remove one component from a system and make any meaningful comparisons between the individual parts of another one. That’s engineering 101.

Looking at the system as a whole, you are likely to find some cars with more robust engineering than others. That usually comes at a price. It doesn’t mean the other car is unsafe because it meets the established standards. But if those additional features are important to you, you need to pony up the extra money to get them. Carping about how all cars don’t live up to the standard you find attractive and valuable is just silly.

You can’t remove one component from a system and make any meaningful comparisons between the individual parts of another one. That’s engineering 101.

Please don’t confuse him with science or Math. He just gets really frustrated and will start making things up again.

Was the owner’s manual [for info how to work the headlights] in the [rental] car?

I expect it was, but no need for me to look for the manual b/c decided to drive only during daylight hours on trip. ( I had a lot of weird trouble on that trip, e.g. credit card kept being denied couldn’t buy gasoline or pay the hotel except with cash. After the trip I discovered the CC servicing company decided to change from one company to another that week, resulting many glitches for customers.) If I had to drive that rental car at night, rather than looking it up in the manual I’d have phoned the place I rented the car, very likely someone there would have known.

He just gets really frustrated and will start making things up again.

Did he stop making things up ?

Of course you could always enter to win this “Honda Civic” or a Chinese power wheels copy of a Mercedes if you think a power wheels is sturdier than a car. Of course this is just one of many car giveaway scams circulating out there right now. I really don’t know how people fall for these but they do and often spend $5000 in GIFT CARDS to pay the fees or taxes. Of course you get nothing in return, not even a toy car. 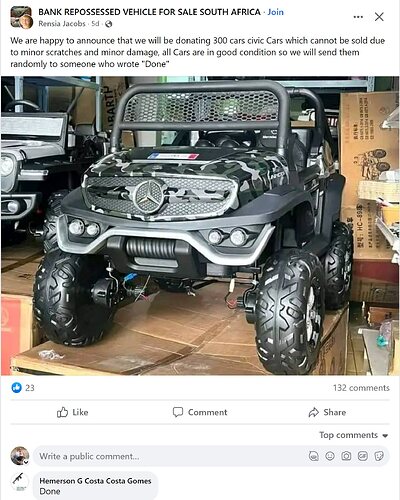 don’t know how people fall for these [scams]

Teenage me was totally convinced I could buy a perfectly drivable used Jeep from US Army surplus for $50. Planning that for my first car, based on what my friends told me. For some reason I could never convince the US Army to sell me one of their Jeeps for $50 or any other price … lol …

After WWII you could buy an M1 Garand for about $20 at almost any hardware store. Try buying one now. The gov’t auctions off surplus stuff a couple times a year, you just have to meet their requirements to be a bidder.
P.S. that $50 Jeep story was around when I was in H.S. too, the bidding may have started at $50.

The fable that was circulating when I was in college was that surplus WW II-era Harleys–never used, and packed in Cosmoline–were available for $25. However, the people spreading that tale never seemed to know exactly how I could get one.

I can tell you that after having obtained a gun that was covered in old, dried up Cosmoline, you would have regretted that purchase even if it was possible at that price. What a disaster! It took a l-o-n-g time to remove it and it was not pristine afterward

I can’t imagine tackling something bigger…

I had one where I boiled the thing in water outside to remove the cosmoline. This actually worked pretty well and once it was gone, I made sure to give it a nice oil coat to prevent rust. I have always wondered about someone wanting to preserve a car for all time and how it would best be done. I have heard of people saying you can fill the engine ENTIRELY with oil, filling to the oil fill cap, removing the plugs and filling with oil, etc. I don’t know if this would help but it makes sense since condensation in the cylinders would be eliminated.

I think I would add removing the positive lead from the starter as part of this so someone doesn’t accidentally try to crank it over completely filled with oil.

Vintage cars in the museum I volunteer for are kept in a climate controlled building, the coolant is completely drained and the passages blown dry (for hours!). The fuel is drained, the vapor blown out. Oil is left in at its normal level. Batteries are removed…except the McLaren F1 which is kept on a maintainer.

Seems to work as a number of the cars are over 100 years old and still run.

Interesting. Another thing one could do is seal up the cooling system once it is drained and blown dry for hours. One could place a dessicant gel pack in the cooling system somewhere to absorb any moisture that was missed by the drying procedure. This would also account for changes in temp and condensation but it sounds like that isn’t an issue where they are in your case.