I traveled cross-country and drove 1,200 miles in two days. Not long after this, I checked my engine oil, and the dipstick was as dry as a desert. Code P0420 also came up even though I recently put a new catalytic converter in the car. The cat only has 20k miles.

I had my oil changed before the trip. I’m guessing there is either a leak or the engine is burning oil. When leaving my car overnight, I’ve noticed a drop of oil on the ground about the size of a nickel.

Is it normal to lose this much oil?
What do you think is happening?
Do you have any suggestions?

If the engine is burning oil, which sounds like yours does, this can damage the catalytic converter, which can result in the P0420 DTC.

Is it normal to lose this much oil?
What do you think is happening?

Mileage on engine not stated. Engine may have been worn out prior to trip.
Oil not checked frequently enough. Now more damage has been done to the engine.

Thank you for your response. The engine only has 70k miles.

Do you (or have you) change the oil at least once a year?

The engine only has 70k miles

I assume that it has a 4-cylinder engine. 70k miles is around the point where my friend’s 2008 Rav-4 began consuming a lot of oil. Do any of the other forum members know whether this known problem with excessive oil consumption for Toyota 4-cylinder engines includes 2005 Camrys?

Additionally, since this car is apparently driven less than 5k miles per year, I really hope that you change the oil on the basis of elapsed time, rather than on the basis of odometer mileage. You should be changing the oil every six months.

However, this is kind of irrelevent. The engine was damaged in a flash flood in September of 2021. I had to remove the engine and put a another used one in in December of 2021. This issue with the oil and P0420 code started in late January 2022. I was told that the used engine also has about 70k miles.

The replacement engine is under warranty, but I moved far away to another state. Im figuring out what the best thing to do for me is.

Why do you think it is burning oil as opposed to leaking?

Thank you! I put 10k miles on the car each year since I bought it used in December of 2019. I changed the oil every 3k.

Why do you think it is burning oil as opposed to leaking?

Because it is a used engine . You need to check the oil at least once a week and since you asked in your other post pick a day to check it before starting the vehicle.

just a thought… you do have a leak if you are having an oil spot on the ground. it should be fixed because it will only get worse. check to see if it leaks more with the engine running. but you can be burning oil too.

If the engine were leaking that much oil in that mileage, there would be evidence of oil somewhere and oil would be dripping on the ground.

I’ve noticed a drop of oil on the ground about the size of a nickel.

it is leaking oil.

A used engine has all sorts of question marks. Generally you don’t know how (or if) it was maintained prior to being installed in your car. Not being critical, just an observation.

Can an engine be leaking oil and burning oil simultaneously? I don’t see any reason it has to be only one or the other.

When you’ve been checking the oil in December and January, has the level been dropping?

How much oil did you have to add when you found the dry dipstick? We need that information to guess how much damage might have been done.

Thank you for pointing this out. I wasn’t sure if a nickel-sized drop was significant.

I wasn’t checking for leaks during that 1,200 mile cross-country drive though. It was qlso difficult to determine once I reached my new state because I don’t have a private parking spot. I will double check on the leak soon by putting a piece of cardboard under the car.

I made the 1,200 mile trip about a week after I had the engine replaced.

When I noticed the superdry dipstick, I had to pour in about 2.5-3 quarts of oil to reach the full mark on the dipstick. 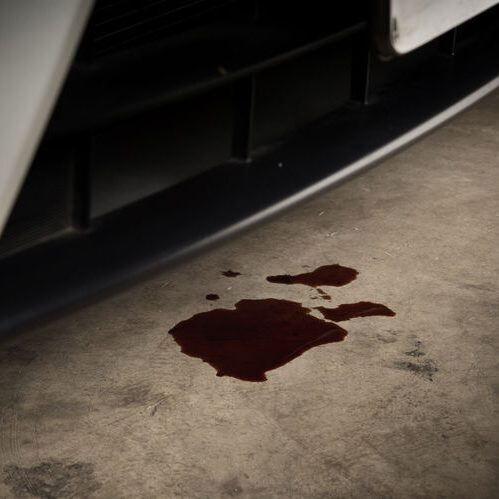 That would mean it would have soaked other components under the hood and under the car. And when the vehicle is stopped is when all that oil drips down onto floor.

When I noticed the superdry dipstick, I had to add 2.5-3 quarts of oil to reach the full mark on the dipstick.

After this, I was checking the oil in late December and January, but may have been doing it wrong. I noticed a drastically different oil level when checking the oil after driving and when checking with a cold engine. This led me to adding an additional quart of oil about 2 weeks ago. Due to this, the oil may actually be too high on the dipstick now.

So, I’m not really sure if the engine has continued to lose oil since I added the 2.5-3 quarts. I will know for sure when I check it tomorrow morning.