TL:DR – Severed some wires in the wiring harness going from engine compartment to ECU, fixed them and now the car Idles rough and has very stiff brakes. Looking for possible causes and solutions for them. Have 4 engine codes after repairing wires. Codes were P0422, P0300, P0302 and P0303.

I wanted to route a cable for LED lights since my factory fog lights are broken. I looked online and found a suggestion to route the cables through some rubber blocks found behind the air filter assembly. So I proceeded to disassemble the air filer and remove the pieces. I got everything taken out and found the area talked about. Its under some panels which have three thick wiring harness runs that go into the dash. Two of them terminate into the main computer of the car, the other goes elsewhere, I’m not sure.
So I play around with the rubber blocks to see if I can pull one out to thread the new wire through. I find that I cannot pull them out, so I think that I might need to drill a hole in the block for the wire. I proceed to drill a hole, but the drill goes sideways due to the soft nature of the rubber and it catches something. I pull out the drill and I find that two wires are stuck to it. I immediately panic, ‘Oh CRAP! I just messed something up BAD!’
The rubber block is now most of the way out. I cut it loose and inspect the wire runs. I severed two, a WHITE wire and a PURPLE/YELLOW wire. And damaged three others, Sadly I don’t remember the colors. I took some time and searched for what these wires did. I think the PURPLE/YELLOW is for the Camshaft Position Sensor, but I couldn’t find what the WHITE wire went to. This just added to my despair. (Any ideas, BTW, on what the wires go to?)
So I dig into the dash and unhook the Computer/ECU and thread the broken harness out a bit more so I can splice the wires back together. I got some 16 gauge wire and spliced the wires back to the appropriate ones. I try to start the car, but I forgot to plug the ECU back in so it just turns over several times until I realize that I don’t have the computer in.
I plug the computer in and try to start it again. It starts, but doesn’t run well, as I don’t have the air intake all put back together. But at least it runs. I’m happy that I didn’t irreplaceably damage the car. I don’t fancy changing the entire wire harness. And from what I could find online, the part isn’t listed for sale (Or I’m not entering it correctly, wasn’t sure what to search for)
So I finish running the wires for the lights, close up the dash and reassemble the air filter. Make sure it all fits properly. I start the car and it turns on, but now it idles funny and I’ve got the check engine light on. I let it idle for about 5 minutes to see if it will even out and stop chugging. No dice. Still idles poorly and at times seems like it is going to die.
Another weird thing is now my brakes are SUPER hard to press. It’s like the brake line pressure is really high. The car does stop, but I have to press really hard on the pedal, when before they were quite easy to press and would grip easily. Now its kind of scary, sometimes I’m not sure I will stop in time.
Any advice on what may be causing the rough idle and the stiff brakes? I checked the codes and they were for O2 sensor/catalytic converter, and then three for possible spark plug/spark plug wires.
Codes were P0422, P0300, P0302 and P0303.

Here are some pictures of the wire harness I am talking about and their location:
The wires exposed (I damaged the middle one): 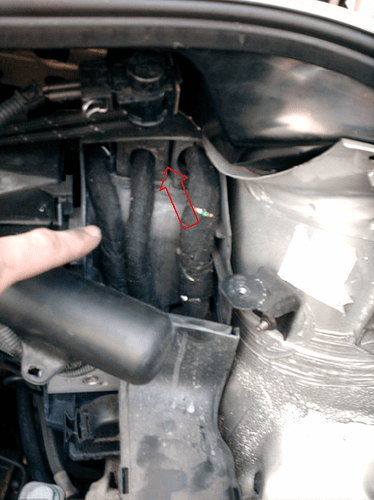 Where the wires exit the firewall and into the dash, connecting to the ECU/Computer: 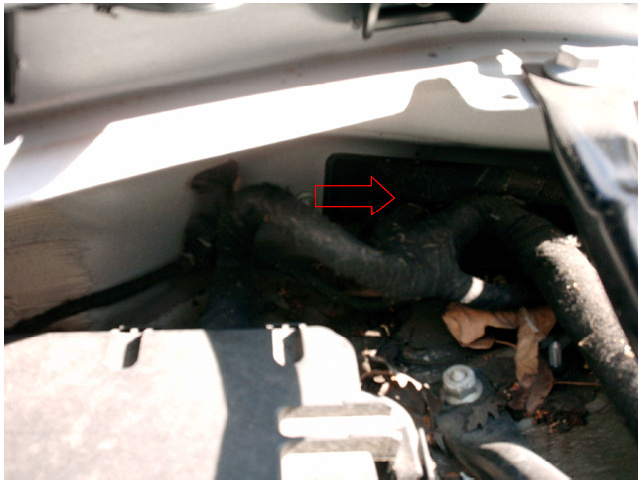 Sounds to me like you need to plug the vacuum hose back up to your brake booster or you drilled into the booster. Thus causing a vacuum leak resulting in your codes and engine misses.

I was wondering if it was something with the vacuum lines. There was an odd sucking noise after I reinstalled all the hoses. I’ll check to see if I missed one somewhere.
The exhaust also smells really rich, like there is too much fuel. I’m just hoping I didn’t crack a pipe. I can’t find replacements anywhere. My local Auto parts store doesn’t carry any hoses for my car. And the local wrecking yard no longer had my car as it’s older than 20 years.

OK. So I took a good look at the hoses tonight and I didn’t see anything out of place. I palpated the hoses to see if there was a rip or tear in any of them, but I did not feel any. I looked at the hoses and did not see any cracks or tears either. No hoses were displaced or not attached. Everything looked to be in order.
I asked a person at the local parts store and they advised to check the fuses to see if one of them blew when the wires were cut.

I’ll check the fuses and update what I find.

Rockauto has some parts if you are having trouble finding parts. For the brakes I guess I would start at the booster and follow the hoses to either a small canister or to the engine source. Gotta be something wrong there.

As far as the other, I dunno. I suppose it’s possible that it is relearning the settings since the battery was disconnected. Also possible the work wasn’t up to snuff. Or maybe shorted something out. A wiring diagram would help but I suspect it may need to go to a shop if you can’t find a problem. Once I was trying to run some new wires and picked the wrong black wire out of three available. Ended up with a dead short to an injector that the shop had to figure out. So stuff happens but when you’re stumped you’re stumped. But always gotta go back and recheck and recheck your work.

There was an odd sucking noise

First thing is to find the source of this.

Alright. Found it! Just like many of you said, it was the brake booster hose.

Found the brake booster after some searching and YouTube videos and checked it tonight after work. There hose is incredibly brittle and fell off of the connector. I’ve reattached it as best I can for now, and will be ordering a new one ASAP. Glad to say that reconnecting the hose fixed both the stiff brakes and the rough idle.

Thank you to everyone who commented and helped me sort out this mess I made.

Now to see if I can fix the broken speakers. Not really looking forward to pulling the door panels off.

Also of note: my local wreaking yard DOES carry my vehicle. Not sure why I thought they didn’t. But they have plenty of broken cars for me to dig through. Might be hitting then up for a new door panel and power window switch.

I had totally forgotten about Rock Auto. Thanks for the heads up. It’s looking like my o2 sensor is bad (according to the codes) so I think I’ll order one and replace it. Doesn’t seem to hard on this car.

It’s looking like my o2 sensor is bad (according to the codes) so I think I’ll order one and replace it.

No, A P0422 is a bad Catalytic converter

No, A P0422 is a bad Catalytic converter

It could be, but it could also be bad O2 sensors too (or an exhaust leak). O2 sensors are a lot cheaper than a Cat. If @clp.camman85 doesn’t have a scanner capable of reading the live data from the O2 sensors, then I’d try them first too

It could be, but it could also be bad O2 sensors too (or an exhaust leak). O2 sensors are a lot cheaper than a Cat.

But seeing this happened after he damaged wires, there is also a good chance he didn’t get them all repaired.

It’s also possible that after he gets his vacuum leak fixed, it may go away on it’s own.

But seeing this happened after he damaged wires, there is also a good chance he didn’t get them all repaired.

It’s also possible that after he gets his vacuum leak fixed, it may go away on it’s own.

I agree with that, my primary disagreement was the P0422 points towards a bad cat only

I really hope it’s not my cat. I don’t relish the thought of replacing it. Or the repair bill to have someone else do it. I’ve watched some videos on how it’s done and it does not look like something I’d be able to do. I live in an apartment, I don’t have a shop or area to set up lifts to get under the car.

I think I’ll try replacing the 02 sensor first. See how that goes then if I still get the code, go from there.