Broken axle or is there more?

So yesterday im driving down the road, had just made a right turn going maybe 7 mph when the left front tire fell off of my car! I can tell looking underneath it that the axle is just hanging there, i can see it. My question is… If JUST the axle broke will that cause the tire to fall off or is there more? Its still attached to something… I just haven’t really looked at it yet.

Sounds more like a ball joint failure to me.

Can a tire fall off just from a broken axle? Im pretty sure you’re right, this is just out of curiosity. I know the axle is broken too though cause it’s literally just hanging there underneath the car

Not on any design I know of. The axle floats between the driven side and the wheel on spined shafts. It is not a structural component. The wheel is typically bolted to a hub that is connected to the car via the upper and lower control arms. If the axle breaks, the wheel is no longer driven but it won’t “fall off”. Now if a ball joint separates, the wheel can and usually does exit stage left…

Not a broken axle all by itself. The wheel is connected to the hub. The axle hooks up to the hub in order to turn it to make the car go, but doesn’t structurally support it. You can take the axle out of the car entirely and the hub will still be attached.

What kind of car or truck is it?

Its an 01 Mitsubishi mirage. The axle has been making the clicking sound for a couple months now and I didn’t know what it was until this happened and i did a bunch of research on it. I obviously knew the clicking noise wasn’t normal… But my dad said it was nothing to worry about it haha. I just wasnt properly educated, i suppose. Thank you guys for all your answers though

That sounds like a worn CV joint. That is part of the axle assembly. However, what I suspect happened is you also had worn ball joints. One failed and when the wheel collapsed, the axle broke. The axle will come out of the hub, but it needs to be pulled straight out and they are a tight fit. A rapidly tilting wheel assembly could easily just snap off the axle or CV joint as it collapsed. It should be easy to see…

The tire is still able to support the car. Like, nothing is sunken down into the fender and it doesn’t need blocks or anything to hold it up. I hope i explained that in a way that made sense. That’s part of the reason i wasnt leaning more towards ball joint

when the left front tire fell off of my car!

The tire did fall off. I’m saying, we put it back on and it still supports it

So did someone forget to install the lug nuts? Did you have to buy any parts in order to put the wheel back on the car?

The tire didn’t actually fall off. It didn’t go rolling down the road or anything lol. I guess a better to explain it would be it went kind of sideways and underneath the car

If the wheel assembly folded down under the car, that is consistent with an upper ball joint failure but the lower one is still intact. If you jacked up the car and put the wheel back into it’s normal position, it would still support the car. The wheel will not change position in any way if just an axle breaks. However, as I said previously, if one or both ball joints fail, then the axle can break as a result of the wheel assembly folding down.

Rockauto doesn’t list a front upper ball joint for your vehicle. So there isn’t one to fail. 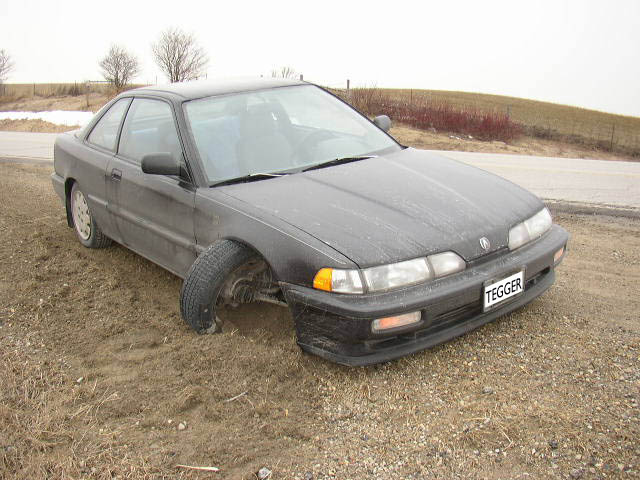 /what I get from the OPs post is that the wheel bearing failed and the axle pulled out of the tranny.

I am glad you could get something from the OP’s conflicting posts. The only thing I get from them is that the car needs to be towed to a mechanic or sent to a scrapyard.

I suspect the problem is what Tester shows in the photo above. The gadget the wheel is bolted to is called the hub assembly, and that part connects to the chassis with a control arm, strut, and tie rod. If any of those three parts fails, this can happen.

Another scenario that sometimes happens is the wheel (& tire) come unbolted from the hub assembly b/c of loose lug nuts. That can sometimes result in a similar looking failure. So it is important to determine whether or not the wheel came loose from the hub or not. In the photo above you can see the wheel is still bolted to the hub for example.

The only thing I get from them is that the car needs to be towed to a mechanic or sent to a scrapyard.

I agree. The tire fell off. Axle hanging down. Tire supports the car. Tire did fall off, and they put it back on. Tire didn’t fall off, went sideways and underneath.