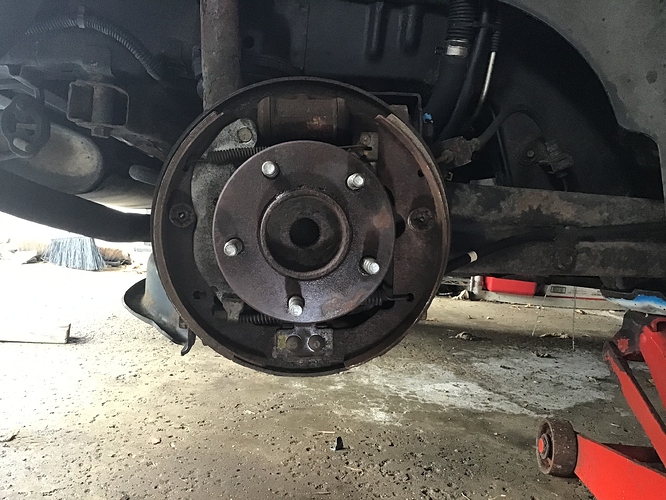 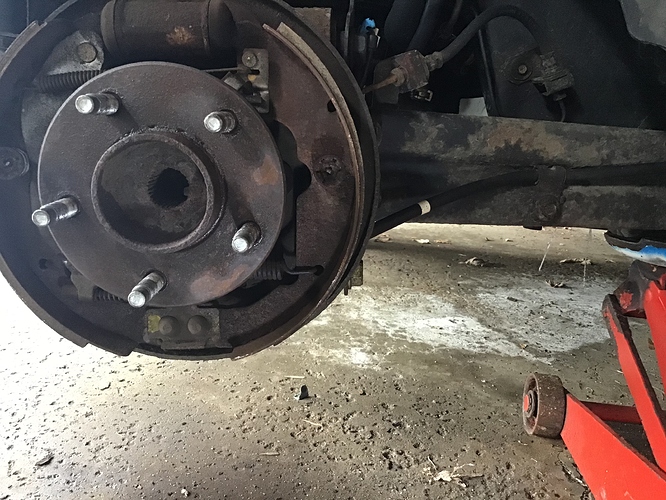 back shoe is ok, worn less. Front is worn more. Since they come in pairs, they are both replaced. Why is Rear not worn more when weight of car shifts forward? Shouldn’t rear shoe be worn first? Or more? Should both shoes wear evenly?

No, the turning of the drum (clockwise in the picture) and friction of the front shoe on the drum surface ADDs to the force on the forward shoe when the brakes are applied so it wears more rapidly. This doesn’t happen on the rear because the frictional force at the drum removes force from the shoe

That used to be true in the older all drum brake systems because the shoes floated. Back then, the pads on the rear shoes were longer to compensate. In disk/drum systems, the shoes are anchored and pivot from the bottom, so the forces are about equal.

It appears that your front shoe got out of position for some reason. That will have to be addressed. Could be as simple as lack of lubrication on the back plate.

There is something wrong with your set-up, The person who did this job previously put in 2 leading shoes.There should be a leading shoe and a trailing shoe per axle like in this picture. 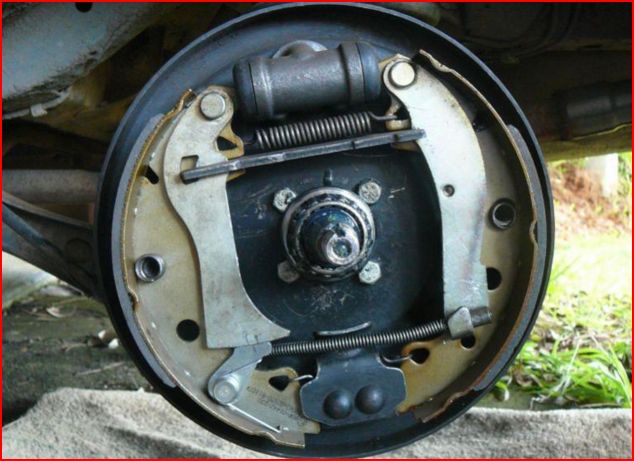 well it is a saturn vue. pic shows a post on the front shoe. post is for the self adjuster hardware and the rear shoe has the hole for the e brake arm. i got my drums off my equinox to fix abs sensor last month and it is identical to the vue and finally got the drums off the vue today 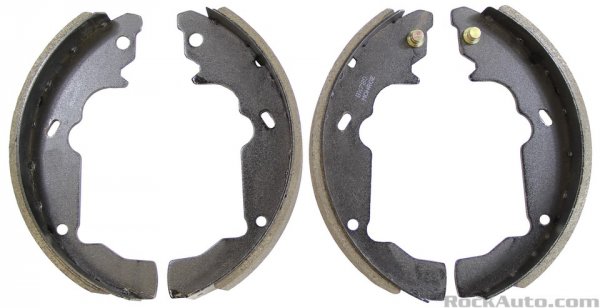 If I were you, I wouldn’t trust any of the components

Might as well do it right, that way you’ll be good to go for several years

Could frozen adjusters cause this?

Normal wear usually causes this but how many miles have the old ones been on there? We can’t tell, we can only see the wear.

Ok. New shoes and new drums tonight. We got 5” snow today and ice so I was doing a few bootleg turns prior to brake work. The rear does seem to come around easy enough. So, maybe the old shoes were fine but just worn?

I’ve seen wear like that on a few of my vehicles when changing brake shoes, and as far as I know, the brakes were working fine. I think you’ll be fine with new shoes and drums, and adjusting the brakes. I would use new hardware and put a little grease on the contact points on the backing plate and on the adjuster threads. You can replace cylinders if you want, like mentioned above. I don’t replace them if there’s no moisture around them indicating a leak. If I was proactive like that, I’m sure it would somehow magically cause something random and unrelated to fail. That’s my excuse, anyway

My truck has drums all around, and my cars have all been rear drums. I’ve never seen wedge-shaped wear like that on any of the shoes. But each manufacturer seems to have their own unique drum brake designs, so that weird wear pattern might be normal for that particular design. I would expect the front shoe to wear a little more than the rear, with it configured w/ the posts at the bottom like that. If there’s a problem – beyond needing new shoes – I’d guess it is caused either b/c the parts weren’t sliding properly against the backing plate, the drum diameter is too large b/c or wearing, or the adjuster wasn’t working correctly and allowing too much slop between the front and rear shoe. If the drum inner-diameter measured within spec, maybe a new adjuster and a proper clean & lube on the backing plate is all that’s needed.

I’m definitely not a brake expert. I keep thinking if the adjuster was stuck (causing adjustment to be too loose), it would tend to cause more wear on the top edge of the shoe than the bottom. But I don’t have a degree in physics, either. So I might be thinking bass ackwards. Maybe they were initially adjusted too tight, though…? Who knows. Maybe Midas

Cavell, were the leading shoes worn the same on both brake sets?

Drum brakes are puzzling indeed. I discovered a weird problem with rear drum brakes on my Corolla recently. The right passenger side shoes were worn much more than the driver’s side. But the brakes didn’t pull right/left at all. Stopping straight as an arrow.

both sides had same wear. the bottom/front shoe. the pivot point is at the bottom and the top cyl pushes the shoes apart. the bottom of the front/rear shoes are both at the pivot point. both cyls were dry. no leaks.
i lifted fron off ground and pumped brakes and checked both front wheels turn easily. i think the calipers are acting as expected. but the brake pedal still feels not quite right. every saturn vue owner i talk to says that is normal. crappy brake feel
kid got vue 8yrs ago? 100k miles. at 175k now. rear brakes have never been touched. might even be original

found at brake website: When the shoes on a leading/trailing system do not slide down properly, they tend to wear at the top. Shoes that slide down, but do not return when released, will wear at the bottom. Partial application can be due to lack of lubrication, worn or bent backing plates. Brakes in this condition do not perform very well. Rear brakes that do not work properly will cause the front brakes to do more stopping than necessary. This can result in rapid front brake pad wear, noise and warped front brake rotors.

100k miles. at 175k now. rear brakes have never been touched. might even be original

On front disc/rear drum brake designs – a very common configuration – the rear shoes last many, many miles before they wear enough to start making a noise. It’s no wonder the rear shoes would not be sliding properly on the backing plate at 175k miles.

This is regular wear for this design. This is not a primary/secondary system but a front/rear system. The later system does wear the front shoe more because the pressure provided by the hydraulic piston is amplified by the shoe friction material and the resultant force is carried by the anchor… Whereas the rear shoe is also applied by the piston but without the amplification of the shoe friction material only has the pressure of the piston so it wears some but not much.

Looking at the picture, I finally l understand the workings of the automatic self adjusting of this front/rear brake system. I notice when the emergency brake is pulled the self adjusting lever slides out closing the clearance on both shoes.