Brake grinding due to jack failure

So while changing my front brakes,my jack failed and the rotor landed on a wood handle of a wire brush. As well i had the wheel under the side of the car just in case something did happen. So the rotor never hit the ground. It went into the wood about 1/4 inch.

After this there is a grinding noise that happens once in awhile when brakes are pressed. From the side that fell. Any idea what it could be? I took it all apart again and brakes wise things look ok. Anyone with ideas would be greatly appreciated.

The first thing I would check is if the dust shield behind the rotor got bent.

Which is exactly why you always use jackstands to fully support the car instead of trusting your jack… Or the tire stuffed under either!

I am very glad you were not hurt or killed. Buy some jackstands, please!

Agree with @PvtPublic , check the dust sheild. Check the bearing for looseness and be listening for a growl to develop.

Jack (use cautions above) both front wheels up, turn the problematic one by hand. Hear the noise? Now steer left and right. Hear the noise? Next ask helper to step lightly on the brake. Turn by hand. Any noise? Iff all that doesn’t show the problem, and it is relatively simple to remove rotor, do that, check everything out visually, fix what’s bent, then reinstall. Since it landed on wood , seems unlikely much in the way of bearing damage.

Besides the wheel idea for safety, which is a good one, I also stack 2 x 6, 2 x 8 long blocks of wood under the side rails as high as possible, so if car falls it won’t fall more than an inch or two, and land on the stack of wood blocks. Doesn’t entirely guarantee safety but is a major help. Jackstands of course a must.

Beside the use of jack stands, always block the wheels on the un-jacked side of the car. I’m just guessing, but you probably did not put on the parking brake and your car is probably front wheel drive, so if it was only in park that would have been a useless jester. Park requires both drive wheels to be firmly on the ground, otherwise the differential does it work. Don’t believe me, the next time your car is on the lift and the car is in park, try turning one of the wheels and you will see the other one turn the opposite way.

I also stack 2 x 6, 2 x 8 long blocks of wood under the side rails as high as possible, so if car falls it won’t fall more than an inch or two, and land on the stack of wood blocks.

Ironically, I always do that too.

Oh the tire saved me from creating more damage. The bad thing with hyundai tuscon. There is no place to put a jack stand according to the manual or where i checked on line. But since then i have bought a combo jack and stand to help this from happening again.

Jack was positioned on side of car and wheel blocks were in. Also it is an Awd

Good idea. That would have saved the minor damage to my rim.

Thank you for the input. Will try it next chance i have.

There is no place to put a jack stand according to the manual or where i checked on line.

You need to check your manual again. This is from the 2012 owners manual. You never stated what year your is, but it will be the same. 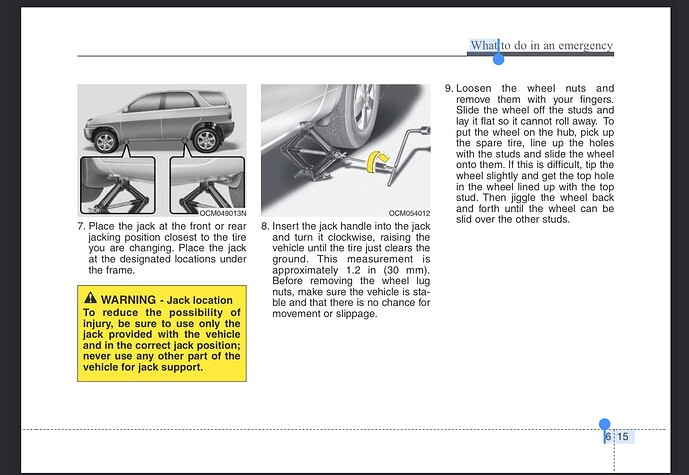 You need to check your manual again.

Which one do you put there ? the jack or the the jack stand ?

You can’t do both.

Which one do you put there ? the jack or the the jack stand ?

You can’t do both

I was just pointing out that the jacking positions are in the manual. If someone can figure out how to replace the brakes they should be able to figure out where to put a set of stands. If they can’t should they really be doing the work?

Yes i seen that. That is the jacking point. So if a jack is in that position where do you put the jack stand? Unless putting it beside it but didnt know at the time if that is ok. But i got the combo jack and stand so dont need to worry about it now.

That is the jacking point. So if a jack is in that position where do you put the jack stand?

Can’t speak to the configuration of your vehicle, but when working on the front wheels of my Corolla I place a floor jack under the longitudinal engine cross-member, a mid-point that is balanced left vs right, which lifts both front wheels at the same time. I Then I place jack-stands where the vehicle’s jack would normally be placed, like shown in the diagram above, on the pinch welds at the side of the car, a little behind the wheels. I lower the car so the jackstands are carrying most of the weight, but still the leave the jack in place holding a little of the weight. Worried about bending the pinch welds with your jack-stands? There are commercial rubber hockey-puck gadgets that have a slot for the pinch welds. Those are probably the safest. I use some 2 x 4 wood (D Fir) blocks for that purpose. I made the slot with a saw and chisel, oriented 90 degrees to the wood grain. The slot orientation is important b/c the wood can split without warning otherwise. Ask me how I know … lol …

Some posters here say don’t worry about bending the pinch welds with the jack-stands, the metal there is so strong it won’t bend, or at least won’t stay bent. Never tried that method myself.

As I mentioned above, I don’t totally rely on either the jack or the jack-stands. Before placng myself in a position I could be hurt if the car falls I always place 2X and/or 4X sturdy wood blocks near the jack-stands right up the sill. If I’ve removed the wheel and put it under the car, I sometimes place the wood on top of the wheel.

Working on your car should be fun and if not fun, at least save you some cash, but never dangerous.

Suggest putting wheel, or a wheel with tire, under the rails and pack the remaining space with wood, paying attention to grain orientation (wood under compression can shear suddenly along the grain). Plywood whose interior knot cutouts have been filled is good for this.