@jtsanders … Why should they be responsible? They shouldn’t but I mean if they are leaking all over his driveway and there is simply a piece of something that can be extracted in order to stop the leak then you simply do what needs doing. Probably isn’t going to be that simple tho…

I wonder if the wrong bleeder screws are being used. Metric vs SAE.

When I had multiple bleeder leaks on new calipers, there was no debris and the screws fit fine. It was definitely a machining defect.

Let’s say I choose to rebuild some recycled calipers. Would there be a need to hone the cylinder if the piston rides on the square cut seal, as I believe it does? Assuming the cylinder bore isn’t rusty of course…

I’ve only rebuilt wheel cylinders (and master cylinders) for drum brakes, never had occasion to rebuild a brake caliper. But it seems like it’s the same idea, just a simple piston & seal inside a metal cylinder. I’d guess to do the job correctly you’d have to hone the cylinder no matter the cross section of the seal. In any event on the wheel cylinders (& masters) I’ve rebuilt there has always been some corrosion or gunk build-up on the surface of the cylinder wall. That’s why they needed to be rebuilt, as those surface imperfections eventually damage the piston’s seals. It’s not exactly rocket science to hone a cylinder, it rarely takes more than 5 minutes (if it does I just buy another wheel cylinder), and the honing-tool is (or at least used to be) inexpensive. Here’s one for $8. 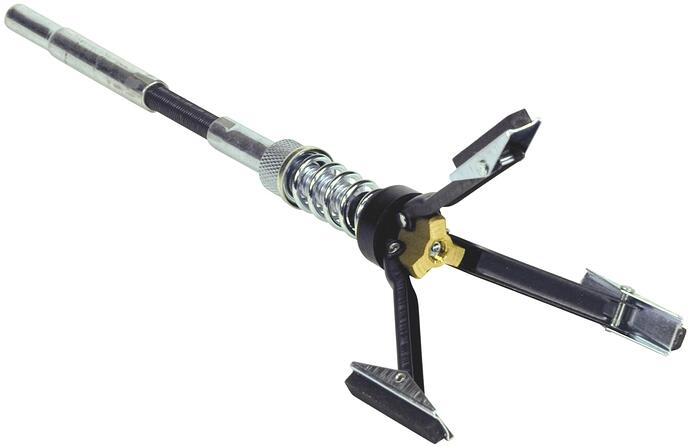 I’ve rebuilt there has always been some corrosion or gunk build-up on the surface of the cylinder wall. That’s why they needed to be rebuilt, as those surface imperfections eventually damage the piston’s seals. It’s not exactly rocket science to hone a cylinder, it rarely takes more than 5 minutes (if it does I just buy another wheel cylinder), and the honing-tool is (or at least used to be) inexpensive.

That’s why it is important to replace brake fluid every 2-3 years max, like a clockwork, then you do not need to worry about rust inside.

I believe the term you are looking for @thegreendrag0n is “Hygroscopic”… and you are correct. Brake fluid is very Hygroscopic in nature .

Why the term isn’t Hydro-scopic I will never know…but i never forgot it because of that spelling trait. Anyone else need some more useless info… I have an abundance…

Anyone else need some more useless info… I have an abundance…

Why do flammable and inflammable mean the same thing? You got to know this has caused some problems! … lol …

I believe the term you are looking for @thegreendrag0n is “Hygroscopic”… and you are correct. Brake fluid is very Hygroscopic in nature .

I know the term, but I specifically wanted to stay our of it, just to keep it simple, now you brought it up

There is no need for a hone, the caliper bore does not have a refined finish, emery cloth will do.
The seal grove in the caliper must be clean and free from corrosion or pits.
The piston must be smooth and free of pits.

My guess on the rebuilt calipers,

The kid earning minimum wage that is supposed to media blast them clean gets carried away with blasting the bleeder port and ruins the machined seat.

For the few times I rebuilt calipers I used “dingleberry” hones

but the declining price of factory rebuilt calipers compared to the price for individually rebuilding them myself resulted in rarely doing them myself. And it seems that cleaning the shellac like coating from the bores was the most significant need for honing.Any physical damage or deterioration made rebuilding impossible in the shop. Factory rebuilders bored out damaged bores and pressed in steel sleeves that were actually an improvement over the originals.

And wheel cylinder bores only required a quick cleaning with a piece of steel wool soaked in alcohol. But everyone seems to find a method they prefer that works well.

It never ceases to amaze me that so many clueless people reply with completely incorrect information!

Why the term isn’t Hydro-scopic I will never know

This is a completely off the wall guess, but I think it’s because Hygro means moisture and humidity whereas hydro means water. And when we think of brake fluid being hygroscopic it’s because it absorbs moisture

I did not know that… Oh CRAP… that’s why its called a Hygrometer, I never paid it much mind. 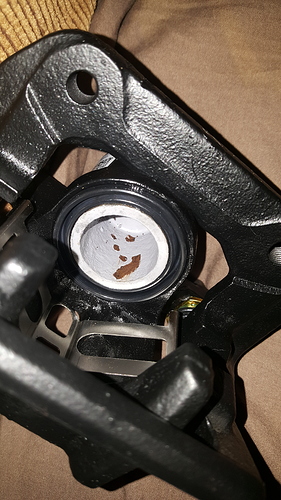 So a little update concerning my brake caliper woes. The Honda oem are really really expensive, so I tried another national auto parts store. Of course, I am having issues with it right out of the box. The piston is not new, in fact it had not even been sandblasted clean. Its rusty and coated over with epoxy primer. This of course did not sit well with me. I pulled the bleeder and the machining looks off and its filled with chunks of debris…looks to be metal shavings and whatever the black coating is. Its darn frustrating is what it is. How hard or cost effective is it to replace with a new piston? A new piston would cost me $10. I am sure that they could get them considerably lower buyong on volume. Some might say well that’s surface rust. No it isn’t, look at the pitting. I used to do bodywork on the side and I know how fast rust can advance, especially in the right conditions. Who knows where it would be within a few years, even if the rest was o.k. Thankfully I got a money back guarantee with the manager before purchase. Needless to say I am gonna bite the bullet and go with oem. I thought it would not hurt to try with the money back gurantee since it was half the price of Honda oem. It only makes sense really in the end as the vehicle only has 112k on it and if its anything like my other Honda I expect it to be around another 200k. Rebuilding at this time is not an option. Time (my most valuable commodity) does not allow for it.

If you can afford new OEM, good for you. End of story.

Otherwise, I would buy used OEM calipers, for example on eBay:
https://www.ebay.com/sch/i.html?_from=R40&_nkw=2006+honda+element+brake+caliper&_sacat=0&rt=nc&LH_ItemCondition=3000
Alternatively, look for recyclers inventory around with http://car-part.com/.
After that I would spend a little bit time to refinish and to replace wear items, then put them on.

I tried another national auto parts store. Of course, I am having issues with it right out of the box.

It’s a very common thing here to see diy’er posters say an aftermarket parts store replacement part was no-good from the get-go. As an example, I’ve purchased two aftermarket replacement starter motors that failed right out of the box in the past 3-4 years. It’s not a big deal to take them back and get another one, but it is a big deal to have to expend the time and effort to install the part time and again only to find it doesn’t work. The aftermarket replacement parts quality problem is emblematic of something out of whack in the USA I suppose, but what that is, don’t know.