Neighbor asked me for opinion about ‘snake oil’ substances for halting small head gasket leak - ie: one drip a minute - on to ground. NO coolant getting inside and no combustion issues. I told him to go to auto parts place and ask staff or read labels.
How about it? Any of you with product preferences? What works and what doesn’t? Are there one or two ‘brands’ that will seal ‘pin-holes’ or scratches in gasket surface (or seepage from rad core, etc) and NOT plug up any other part of system. What worked for you? thanks.

If he’s not concerned about the longevity of the car (and the engine)… I’d try one of the stop leak products out there.

If he’s wanting to keep the car for a while… I’d avoid the stop leak stuff and take it to the shop.

From what I gather, the stop leak stuff you put in the radiator can cause problems down the road.

The consensus here seems to be that they are all snake oil. They can clog the internal passages of the engine that the oil needs to flow through for proper lubrication.

Use only as a last resort, to get a few thousand more miles out of it before it goes to the junk yard.

I told him to go to auto parts place and ask staff or read labels.

That is the best solution. If someone here names something to use and you repeat it and it causes problems that will not be good. Of course I agree with Bill , last resort .

Remove the radiator cap and add one tbls of ground black pepper to the coolant.

Install the radiator cap, start the engine, and watch the leak stop right before your eyes.

I’ve heard that before - - an ‘old wives’ remedy (or old mechanix). Pepper would still have to enter system after engine warmed enough to circulate hot liquid into top and then back out bottom. hmmm

Come to think of it, there are advertised products (name-brand) that vehemently claim NO clogging of passages, since they only gather under special circumstances - like pinhole in core plug - and you don’t see course stuff moving around when rad cap removed.

Of course best bet is to remove head and replace gasket - and check surfaces for damage - and then possibly end up milling head. ($$$)

That’s what I did with my Beretta when it developed an external head gasket leak.

One level tbls stopped the leak for two years.

Then the head gasket totally blew out and had to be replaced.

Based on actual personal experience, take at own risk:

a mystery (very small) coolant leak around/near the water pump of my minivan left me puzzled for months. This was after a crack in the radiator was found and the radiator replaced.
To deal with the leak, I added a few ounces of coolant/water after every few weeks (sometimes 2 months or so).
Rather than go thru the work of dyes and finding the leak, and because I waited long enough to reach time for a coolant change, I tried Alumaseal (the granular stuff) with the new coolant. It worked. No more leaks for over a year (and about 10K) – although I still looked under the engine each time before starting, just in case.

Eventually, there was a small drip and small puddle under the engine. Yet just starting and moving it into the garage stopped the drip. Identified and confirmed the leak was from the shaft of the water pump, and it went back to a very small leak. So the water pump was changed and no more leaks.

The Alumaseal probably did give me the year or so of additional time before the shaft seal finally failed (which seems impressive given the nature of a shaft seal).

For decades I had only good luck for small leaks with the traditional Bars Leaks formula. It is a black gummy looking liquid which contains small pellets that dissolve. They are a substance which expands when it dries out at the site of the leak. I never ever had a plugging problem, and it plugged any leak that was not too large.
Beware, they now make several other products.

They can clog the internal passages of the engine that the oil needs to flow through for proper lubrication.

Huh?
The OP mentioned a coolant leak, not an oil leak.

my mistake. But similar problems…

Not with the Bars Leaks product I described. 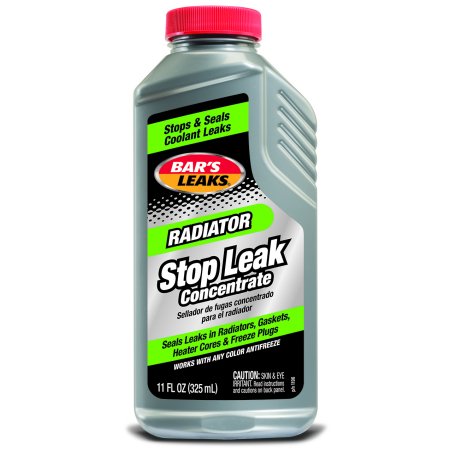 If OP doesn’t mind the possibility of the coolant leak treatment causing problems later, I’d try the pepper idea first, as it is nearly free, and seems unlikely to cause any serious problems elsewhere. If that didn’t work, then I’d try the Bars Leak idea. I expect either treatment will help and may entirely solve the leak for a time, possibly leak free for a considerable amount of time.

What about retorquing the head bolts? That worked on my 1984 Cavalier 2.0 engine. It had a slight leak - oil or coolant - that went away.