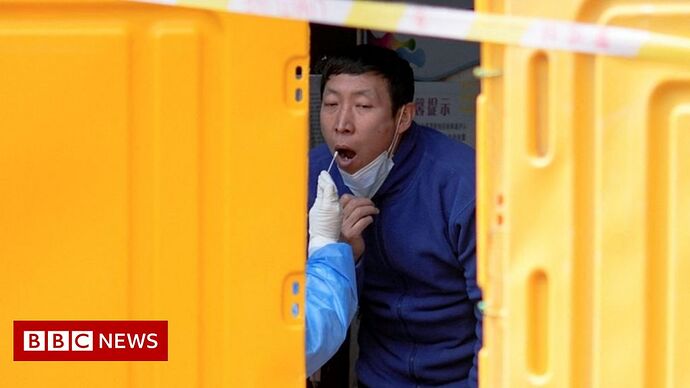 The nine-day lockdown of Shanghai is China's largest since the coronavirus outbreak began.

Of course, there is also a potential negative for the rest of the world, namely further disruptions in the supply chain.

Yes but magnesium price up which means aluminum products could be/are in short supply like small engines, chain saws, parts, etc. Evidently used for hardening aluminum. Not a chemist or engineer so give me a break/brake.

Now I also heard these folks have been stockpiling grain and minerals in anticipation of what is ahead. So fuel prices may be the least of our concerns. Just to cheer everyone up on a Monday and get the ole blood pumping.

I’ve been hearing news reports/comments about changes to USA/European policy regarding both China & India. Related to both countries failing to support the USA’s UN proposal condemning the Ukraine situation. Just today I heard a report that a big chuck of semiconductor manufacturing was being moved to Europe.

Not taking sides but just asking for a friend but does anyone think it is really smart to cancel out a store that you rely on for products? Like burning down NAPA or the grocery store?

bing raised a good point.
Globalization has created some important benefits, lower prices and a mutual international interdependence but it can also create serious “sole supplier” problems when you have a monopoly or eliminated your ability to manufacture “critical components”.
i.e If Napa’s the only game in town, they’re calling the shots…

Food shortages? Yes, US has lots of grain which is a commodity like oil. Which means all US citizens will pay higher prices for food. Our grain is now worth more. To the world.

Yes, US has lots of grain which is a commodity like oil.

If you don’t like a restaurant’s food or service, do you continue to go there?

Frankly, Globalization was and remains a pipe dream and now reality is back. The minute we became dependent on China for critical supply items, we were at risk. Buying critical items from Russia is just as dumb. We learned nothing from the OPEC oil crisis of the 1970s, when we realized we depended on oil from dictatorial middle east nations locked in a conflict with an ally. Greedy US business leaders, politicians and consumers have been living in a dream world since 1992, when we rationalized trading with China for cheap goods, to open its economy to our exports and become more democratic. China was never going to become a reliable trading partner. The reality is this: we spent the last 30 years destroying our manufacturing base and our labor force all in favor of cheap imports from unreliable partners. The days of easy supply lines dependent on long distance shipping and cheap imports? Those days are done.

Globalization was and remains a pipe dream and now reality is back.

My political-economic philosophy would be described as sort of an ‘economy-of-scale’ capitalist. I’m certainly not a Marxist-Socialist, instead fully supporting the principles of pragmatic free-market capitalism, and taking full advantage of economy of scale when that makes for the greater good. Therefore my philosophy is consistent w/globalism. At least in principle. Globalism of course involves a certain give and take between the partners. The problem comes when your global partners turn their back on you, and fail to return your favors. When that occurs, imo you have no other choice than to respond.

Yeah, I was a Globalist. 35 years ago. 6 years of economics and political science and a masters degree in finance will do that to you. I voted for Ronald Reagan and George Bush Sr. too. But 30+ years of working on governmental trade policy and real world economics has convinced me I was wrong. There never was a “New World Order” after the Soviets collapsed (remember that phrase?). Russia was defeated, but its still a dangerous former empire looking to return to its former glory of defeating Hitler, now more analogous to Germany post WWI, looking for revenge. As for the Chinese: Boy did we all get that wrong. China never intended allow its +1 billion people to have access to an open market, it only intended to exploit whatever intellectual property it could get us to part with, in exchange for cheap goods in the short run.