My wife and I bought a '83 VW Vanagon camper several years ago. It is in very good shape and only has 80K miles on it. Lately however, the battery has been going dead. When I charge the battery my charger tells me that my alternator is malfunctioning. So, I took it to my VW specialist who checked the alternator and the battery and said they were both OK. Then, on a camping trip the battery went dead. I charged it, but I had a problem with the sink water pump, so I took it to an RV repair place. The guy who replaced the water pump said, “By the way, your alternator is only charging to 12 Volts… it should be charging to more than 13-14 Volts at least.” So, back to my VW guy. He said he would be glad to check it out again, which he gladly did for $90. He said the alternator and battery were fine, and if the alternator was bad I wouldn’t be able to start the car. Yesterday I bought a battery/alternator checker for seven bucks and plugged it into the lighter socket. It said the battery was weak and the alternate was “charging inadequately.”. Who do I trust?

Start by cleaning the connections, battery pos and negative terminals, connection from alt to battery and ground connection, could be a voltage regulator, but start basic and work your way up. If your battery is more than 5 years old get a battery test, free at many auto parts stores. My guess a new battery and cleaning all connections will solve your problem.

JMHO but your VW specialist doesn’t sound very special. I’d be inclined to have the alternator bench tested at a local parts store. If wont cost $90 which frankly could have gone towards a new alternator. 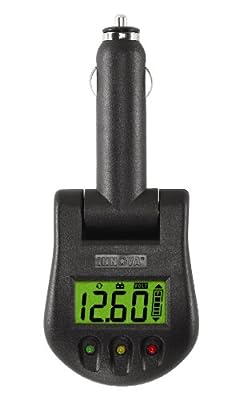 The INNOVA Battery and Charging System Monitor displays the condition of your battery and charging system instantly. It protects the engine computer and 12-volt accessories from damaging surges when j ...

It should read greater than 14V when the engine is running. Be sure to remove it if it’s still powered when the key is OFF.

either alt. or voltage reg. seems to be bad. or a connection prob. as suggested above. i agree also with the comment about the specialist

I’ve had two cars lately with charging problems due to a bad connection between the alternator and battery. Both were found doing a voltage drop test. You can youtube the procedure. Both were bad wires from the alternator, and replacing them fixed the problem.

I hope you get your problem resolved but for the time being…get rid of your VW specialist. A mechanic that can’t do a simple charging voltage check is not really a mechanic and certainly not a specialist. You can tell him/her that @missileman said so.

hes rite if its not charging between 13-14volts the charging system is not working rite. a car can run off just the battery without the alternator working but with modern day fuel injection, computers, ect there will be a constant draw until it gets to low for the system to work properly. i would start by doing what barkydog said and cleaning connection then measure voltage at the battery and the battery terminal to assure there minimal loss through the connection if the voltage is still low i would take a look at the charge wire and voltage drop test if you know how or just take the alternator off and take it to place that can bench test it (autozone will do it for free)

To thoroughly check an alternator one would need to measure its output current as well as its voltage. Its voltage might be fine, but its current could be low. For that you would need a Hall-effect DC clamp-on ammeter, something like the Fluke i410 AC/DC Current Clamp which plugs into most Fluke multimeters.

Its not necessary to buy an ammeter like the one above, simply use a voltmeter clamped to the battery terminals with the engine running and then turn on all accessories, fan on high, headlights on high etc and check the voltage drop at idle and as you rev the engine. When revved, the voltage should go to at least 13.2 volts. At idle it may drop to 12v. If it does, that may be normal but that you are operating too many accessories while driving at a too low RPM to keep the battery up.

If it doesn’t reach 13.2 volts at normal driving RPMs (1800 - 2500), then the alternator is either not large enough or is defective or has some wiring issues.

Since your expertise and tooling may be on the sparse side, I might ask this.
Is the dashboard battery warning light illuminated when the key is in the RUN position with the engine off?
If not, the alternator will not charge the battery.

With the key in the RUN position (engine off) touch the alternator pulley with the tip of a screwdriver. You should feel a magnetic attraction. If not, the alternator is faulty or there’s an issue with the fields not being energized. (that annoying battery light again)
This is not always foolproof but generally speaking if the alternator magnetizes it should put out something and could point to a problem between the alt. and battery.

No matter, solving this problem should not be difficult at all. For 90 bucks he should run a complete electrical system check. Battery test, starter current draw, alt. test, and parasitic draw test.
When I worked for VW any car with an electrical car got that treatment for a measly half an hour labor and it certainly helped covering the bases from the start.

Take it to autozone or advance and they will test it for free.