I have two cars. One with Interstate battery from Costco, and another with Duralast battery from Autzone. On a past cold January morning, Interstate was reading about 12.08 V and Durlast was reading 12.26 V at rest. I did a slow charging on both. Now in July, Interstate is reading about 12.23 V, and Duralast reads about 12.46 V at rest. They are both about 1 and 1/2 years old. Back in January, a menchanic said my readings are normal especially on a cold morning. This is in DC metropolitan area. Are my readings in January and July normal. No problem in starting both cars from January through now in July, and mechanic said not to worry if I have no problem starting.

Twelve something is entirely normal. If the cars were allowed to sit idle for weeks on end that number would drop over time.

If the engine refused to start while being cranked over then voltage can become a negative factor at some point.

Ryun , not meaning to offend but what is causing all of your posts worrying about things most people don’t worry about . If the mechanic said not to worry that should be sufficient.

Batteries are functional: if they work, they’re okay.

Battery voltage after an hour is all over the twelve point something range. Usually there are nothing but questions. Cars without much in the way of electronics won’t lose much of what voltage you have and cars with more stuff will lose it faster. It’s here, there and everywhere.

For a no load battery voltage test you must have the doors closed, interior lights off, key removed from the ignition and wait up to 30 minutes for the computers to go into sleep mode.

With a battery voltage of 12.08 your battery state of charge is low, recharge the battery and check the battery the next day. Another possibility is that your automatic headlights are on because you used the remote to unlock the doors and have the hood open.

Measure with a hygrometer.

The only time I worry about the specific battery voltage to the hundredths place is when I’m trying to figure out if I have a parasitic drain on the battery. And the only time I try to figure that out is if I find a dead battery and I don’t think I left any lights on.

Over analysis to the max. If your car cranks slow replace the battery,

Both might be a bit low, but the key is they start the car. You could try charging, let them rest an hour, then test. If concerned about the coming winter, you could have them load tested (in the car) at your local battery shop. You could consider installing a trickle charger (battery minder or similar) and/or a battery blanket.

I wouldn’t be happy with those voltages, assuming the measurements were made under the right conditions.
By right conditions I mean the battery has rested at least a couple hours and no recent load, like from opening the door to pop open the hood.
I’d want to see 12.6-12.7V. Lead-acid batteries are happiest at 100% charge.
I’m generally a weekend driver and mostly short trips (also in the DC area).
I used to give the battery an overnight charge every 3 months, but for the last year I use a 10W solar panel on the dash.
The panel floats the battery at 13.1V in full sun.
My last battery was going strong after 9 years, but I didn’t have the nerve to chance a 10th winter.

Measure with a hygrometer.

Why ?
Who cares what the moisture percentage is ?

A Battery Hydrometer would be a better choice, it measures the specific gravity of the electrolyte.

When are people going to step into the 21 century?

A weak battery, or one that is rundown, may not deliver enough amps to crank the engine when temperatures plunge and the oil thickens. While cold weather

They’re 12-volt batteries, so any reading close to 12-volts is normal.

The thing to worry about is CCA (cold cranking amps), and I wouldn’t worry about them until the battery nears its fourth year in use. At that point, I’d get the battery tested for free at the nearest auto parts store. They will tell you if the CCA are within the normal range or not.

They’re 12-volt batteries, so any reading close to 12-volts is normal. 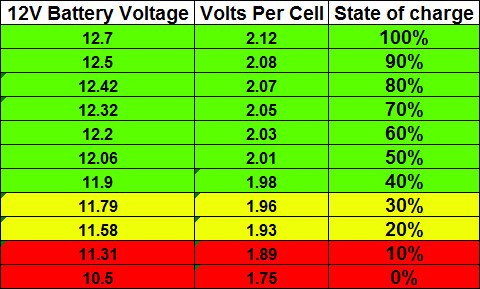 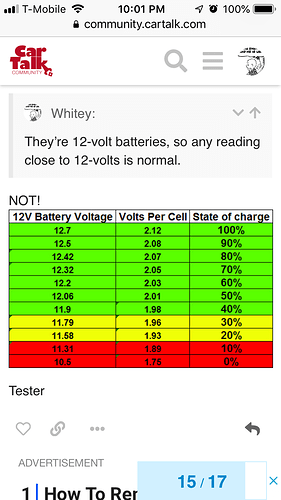 Ask your shop to load or conductance test the battery. While the low 12’s before the first start of the day do seem to be a little on the low side, a proper battery test is the only way to know for sure.