On the heels of Marnet’s “Will changed culture improve GM’s vehicles”, answer me this. For years and years, as I drive our highways, I’ve noticed GM vehicle and vehicle with only one daytime driving light working. My father-in-law had a 1991 Silverado (he since replaced it with a Honda Ridgeline) and he replaced several. That’s what got me noticing so many GM vehicles with the same issue. All these years later and year after year of new/enhanced designs, I’m still seeing GM vehicles with the same problem when I don’t see it with any other manufacturer. From that it makes me wonder if they did “get the memo”?

GM seems to take a very long time fixing a problem. Their infamous intake manifold problem took them decades to solve. Same with their truck ball-joints. I know of no other manufacturer moving that slow.

What about the missing tailgate handles on the trucks??

If I had one, that’d be like a steering in my lap… It’d be driving me nuts!

GM is a big company, really big, like an ocean liner big. Call her the Titanic.
Problems like these are like little babies.
Babies can move the Titanic by pushing on her, but it takes a long time.
Any little breeze can stop progress.
And then there are icebergs…

Toyota is BIGGER…yet they seem to solve design problems in just 2-3 years…NOT DECADES. 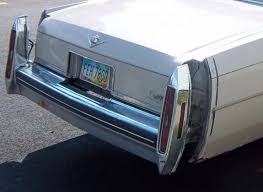 Boy, I cant forget this goof. What a dumb design. When I was a kid, I thought that Cadillac tail lights popped out when they hit a certain age. It took a while to realize that it was a cheap plastic body panel that fell out.

I thought it was because GM used the front turn signals for some DRLs, which burns them up.

During Several Hundreds Of Thousand Miles On Our GM Cars (Chevrolet & Pontiac) With Automatic DRLs, I Can Say That I’ve Had Maybe 2 Headlights Burn Out. It Is So Infrequent That I Really Can’t Recall.

I just don’t see this problem of inoperative GM DRLs, but I always wonder…

…How many lives has GM saved by installing DRLs as standard equipment, on so many makes/models, for so many years ? I don’t think I’ll ever know, but they could have possibly saved somebody in my family from being involved in a collision and for that I’m grateful.

“Toyota is BIGGER…yet they seem to solve design problems in just 2-3 years…NOT DECADES.”

Toyota/Lexus had either 6 or 9 years of producing millions of vehicles that had Oil Sludge problems, depending on whether you go by the 2.5 Million Vehicle Sludge Recall or by registered customer complaints.

You know, this “My Dad can beat up your dad” “My car company is better than your car company ,” playground talk, is quite childish.

Silly, really… Every car company has some skeletons in their closet.

I dunno, I think its kind of refreshing that all that’s left to complain about is burned out DRLs and plastic body inserts. In the old days we talked about engines falling out. I’ve never noticed the DLR problem but I’ll pay more attention. I have noticed that on some cars, depending on the angle you are looking at it from, it appears that one is out until you come at it straight on. Don’t know why. Maybe its the design of the lights or something.

Those body inserts are not necessarily cheap though and are made out of the same material as most front headers and more and more fenders. Yeah, I’d still like to see solid steel bumpers but its a sign of the times with plastic bumper covers and other panels to save weight and make it easier to change designs. They’re pretty easy to replace though except need to be painted.

I, along with a couple acquaintances have noticed that exact problem with GM DRL’s, the consensus amongst us is that you see it most often on Silverados and Tahoes.

There are a lot of reasons I wouldn’t buy a new GM car, not the least of which is what they did to their employees, partners, and dealers (to say nothing of Flint, MI) when they were in dire straits. But I’d have to say that of all the automakers, GM seems the most indifferent when it comes to quality, with the possible exception of some of their “flagship” offerings where the customers just won’t stand for it. Buy anything but a Caddy or Corvette and expect all sorts of stupid problems IMHO.

Allow me to exercise my right to be an equal opportunity brand basher. Since I’m a Ford dude, I’ll have a go at them.

The spark plug spitting triton V8s. Three thread holding a spark plug into an aluminum head has to be the dumbest idea with the most potentially dire consequences I can think of. While I was never a victim of the problem, I owned the triton V8 that was known to spit, and I was always afraid. I knew 2 people it happened to, and frankly, it happened a couple months after they did a DIY tune up at home. in both cases, they paid little attention to torque specs. One guy’s truck never ran the same. The other guy must have called the pope and had prayers said at the Vatican, because he had no major damage. He did, however, pay attention to torgue specs after that.

The marketplace has voted, however, individual pokes notwithstanding. Toyota has become the world’s largest manufacturer, with a reputation for quality and longevity.
GM went bankrupt.
Both happened during the same timeframe.

I’m inclined to think that the masses of buyers of which the market is comprised is more indicative of the truth than anybody’s individual opinion.

And that’s my opinion. {

@mountainbike Right; Toyotas have not become best sellers because of a) styling and sex appeal, b) fantastic handling, c) breakthrough engineering or any other special feature. The main thing was quality, durability, reliability with a resultant good resale value. Those first 3 qualities are distinct and separate. You can have fantastic quality control over items that are poorly engineered, or well engineered with poor quality control. Reliability needs everything done well; design it right, build it right, and provide a sensible maintenance program for long life.

Some poster will pipe up that Toyotas are not perfect, and I agree. They just do all these things collectively mentioned better than anyone else. GM introduced their "Mark of Excellence " in the square logo in 1964; it coincided with a marked DECREASE in quality. They had become a penny pinching organization while constantly caving in to union wage demands. I’m not saying the UAW killed GM; they committed suicide all on their own.

IMO, It seems to me that Toyota builds the best compact (if you can call it that anymore) pickup truck on the market. The Tacoma has been the absolute front runner in it’s class since it’s inception. All you have to consider is that the big 3 pulled out of that category all together for a few years, and 2 of the 3 look as if they have zero intent of reentering the market.
The Ford Ranger is gone. The Dodge Dakota is gone… The Colorado is back, but I can’t see it beating Toyota. I actually see the Colorado / Canyon endeavor as a waste of time & resources. (it cost just as much as a full size, while getting the same mpg and have less room and towing capacity)
The Toyota Tacoma is only allowed to garner it’s high price because it is an extremely proven product. IMO, the only competition it has on these shores is the Nissan Frontier, and even at $8k to $10k cheaper, it’s sales still doesn’t compare.

As far as full size is concerned, Both Toyota and Nissan as far behind the Ram, GM, and Ford.
Both seem to be totally out of touch with the focus on mpg. I’m sure they are good trucks. Pop had a 07 Titan (13.5 mpg on the hwy) and he loved it. It’s obvious that Nissan’s designers have little to no regard for looks. That is one ugly truck.
The Tundra is nice looking, and I hear mostly good things, but apples and apples, you gan get a lot more buying incentives from the big 3 when you sign the dotted line. Toyota seems to really stick to their MSRP.

Toyota’s SUVs and cars are awesome too. It’s a known fact.

@oblivion said “There are a lot of reasons I wouldn’t buy a new GM car, not the least of which is what they did to their employees, partners, and dealers (to say nothing of Flint, MI) when they were in dire straits.”

I don’t disagree with that, especially their suppliers and dealers, but Ford for sure is not off the hook. They only screwed/are screwing over their employees pre-emptively instead of waiting for dire straights. With the three tiered wage system, the morale seems to be pretty low at Ford. The unions and the old timers threw the new folks under the bus to save themselves. New hires have essentially no great future with guaranteed low wages for years.

Another example of the deep divisions in the working class. Old versus young. Still spouting the entitlement mentality, the old decided to eat their young for their own preservation and then complain about how the uncaring corporation forced them into it. Interesting at the very least anyway.

I worked in a GM plant building headlights. It was “Guide Lamp” in Monroe, LA. I was only a temp there, working on the weekends. Some of my buddies that worked full time explained that same type of situation that occurred when the last contract was negotiated. Also, my father-in-law was negotiating for the company, so I saw it from every angle. When it all boiled down, the youngsters took the beating, and the old timers kept their money.
I don’t recall the exact details, but here is what I remember:

a) if you had been there for either 4 or 6 years, you got to keep you base salary, which started at about $26 per hour.

The company promised to do all they could to keep the doors open. In the end, which was about 2005, the sent all the jobs to Indiana and Mexico.

I recall how terrible it seemed that the younger people in the union had no one representing them in the negotiations, and they were a minority in the voting to approve the contract. what a rip off.

The original question was about seeing so many GM vehicles with one DLR out. Could the simple answer be that GM has had Daylight Running Lights as standard equipment for a long time .My Nissan does not have them and I wish it did.