Excuse my ignorance. I know very little about cars but am trying to learn more.

The other day my car failed, showing all the signs of a bad alternator (battery light on, lights dimming/flickering, etc.).
Had a mechanic look at it and it was definitely the alternator - the bracket had even broken - as well as the battery.
After replacing, though, it still has a problem with charging the battery, at least on initial start.
Basically, when you start the car, the battery light comes on immediately. Hit the accelerator or drive 15-20 feet and the battery light goes out and the alternator starts charging again.

The mechanic thinks it is a wiring problem and said that would cost 800+ to fix. He suggested I just live with it.
Does his diagnosis seem correct? Are there other things I should look at and/or test?

I think that the replacement alternator may be defective.

+1 to Triedaq’s comment.
The regulator, which is probably internal to the alternator, appears to be flukey.

From what I have seen, the percentage of rebuilt/aftermarket alternators that are defective right out of the box is fairly high. If it turns out that Triedaq or I are correct, I recommend replacement with a new OEM Hyundai alternator.

Thanks for the replies! It is a rebuilt alternator so that is certainly a possibility that I received a defective one. Would it be worth it to get the alternator tested?

You got that right

A few years ago, a colleague diagnosed a bad alternator on a Toreass

The supervisor was beginning to doubt the guy’s diagnosis, until the last one finally resolved the problem

There may be a good auto electric shop in your area. These businesses are locally owned and do repair work for dealerships and auto repair shops, as well as for the general public. I have had good results with auto electric shops when I bring them a problem starter or alternator. They know these parts (and their subcomponents) and can bench test them, repair them and advise on repair/replace questions. In general they don’t remove and install starters and alternators, but rely on the car owner or general mechanic to do that. You might call or visit an auto electric shop and explain your problem.

I agree with Triedaq and suggest you find a better mechanic.

Many charging systems have the voltage regulator controlled by the engine computer that is programmed to cancel charging under various conditions. Such systems often leave the charging system off while cranking the engine and once the engine is running for a few seconds it is turned on. Failure such as the OP’s are somewhat common and even OE alternators from the dealer can be annoying out of the box. The computer will also shut off charging when manifold vacuum indicates hard acceleration and at the same time disable the AC and when the throttle is released to resume cruising speed there can be a LOOOOOONG delay before the AC and alternator, etc resume operation. Intermittant problems like this are very difficult to diagnose but more often than not the alternator has turned out to be the problem for me. If I owned a vehicle with that problem I would make an effort to eliminate the computer’s interference with the voltage regulator and the AC.

I wouldn’t accept this repair as things stand. The battery light shouldn’t come on, even for a short time. This could get worse later, perhaps after the warranty on this repair has expired, which would cost you more money.

I guess you could say that the mechanic is correct in saying that the trouble you now have is due to a wiring problem but that trouble is very likely to be inside the replacement alternator. The trouble you describe is likely due to the brushes or a bad wire connection inside the alternator. You need to get the shop to replace that alternator to make sure of the issue. There are some simple voltage checks that could be done to prove that the trouble is with the alternator. Checking the ‘lamp’ lead to the alternator is the most critical check. It supplies current to the exciter of the alternator.
'
The high quote the tech gave you along with the statement to ‘just live with it’ is his way of saying he doesn’t want to deal with it anymore and if he does it is going to cost you a lot of money. Getting faulty rebuilt alternators right out of the box is a pretty common problem.

Have your mechanic replace the pre-excitation resistor in the fuse block under the dash to see if it fixes the problem. 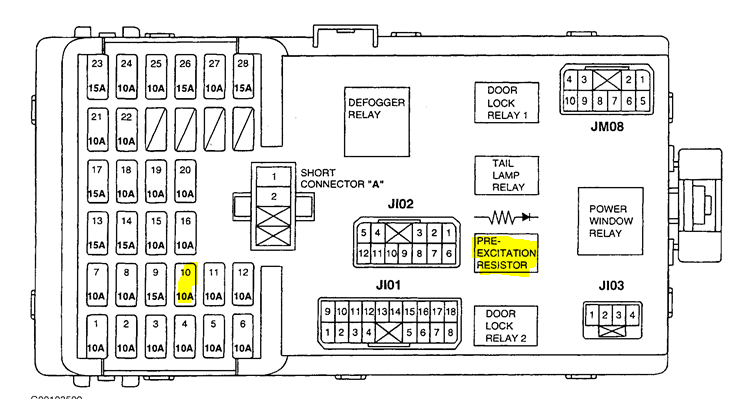 That’s a pretty interesting find you got there @Tester. I have never seen that kind of thing before. If the trouble is external to the alternator that would be the first place to check for the problem. I doubt the resistor/diode is faulty but it may have a bad connection and should be checked at least.

You could go to a dealership and take a test drive, see if that light comes on w/their new cars when the engine is first started.

Bad battery, bad alternator, or drive belt are the most likely culprits. Many auto parts stores will test your charging system for free.

But I’m also curious as to the condition of OP’s battery . . .