It seems that EZ pass is a great way to get out-of-state travelers to pay more than in state travelers. If you drive in the Northeast US on vacation this summer, you might consider paying cash instead of paying the extra, but you are likely to pay the same amount ( you would in MD). Note that this is not a commuter fee, but a differentiation from the in-state and out-of-state occasional user. Is anyone excited about this? Here’s a story that brought it to my attention: 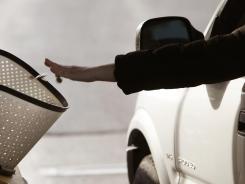 Some tolling authorities have found a way to give local motorists a discount while charging out-of-towners a higher rate.

In IL they have the easy pass, Charging more for those without EZ Pass is called Congestion Reduction, because tightwads like me would rather take the 55mph backroads than buy an Ipass or pay ridiculous tollway fees. Sure I know where I can get on and off for free, but have to harken back to the political promises, once it is paid for the tolls will go away, 5 fold now and not going away.

There must be a way to hack EZ Pass so your car presents itself as a state owned vehicle, exempt from tolls…Just a matter of programing a chip…

If you could capture the RFID serial number of a state vehicle that uses EZ-Pass, it would be fairly easy to clone it. Eventually though, discrepancies would be noticed and the camera information would be reviewed to get your license plate number.

While I’m all about hacking the system, basically you’d just be stealing. You’d be using a service that you’re expected to pay for without doing so. Having a bootleg cable box or downloading music might be a victimless crime if you were still paying for basic cable and weren’t sharing what you downloaded–no one would suffer degraded signal and you would only likely have music that you wouldn’t have bought anyway.

But in stealing a toll, you would be adding your car to the traffic on the roadway, and while the extra wear to the road and increase in congestion would likely be negligible, it still isn’t quite the same shade of grey in my opinion.

When you get up to the booth and the guy sticks his hand out, bargain with him.
Tell him you heard it’s free (whatever make your car is) day. Tell him it’s a used road and you’re looking for a discount.

Think that’s bad? Hertz car rental charged me about $16 for a $2 toll in Florida. No way around it as all lanes were set up with the “Sun Pass” system so I could not pay $2 cash.

The explanation is simple. Out-of-staters don’t vote in local elections. So much for hospitality.

Here in NH…we have EZ-Pass also. And NH residents get a discount at NH tolls.