Can a car really run on woodchips? This week on Car Talk, we got a call from a rather remarkable gentleman -- Hans, who escaped from Germany during World War II in car that ran on, yes, woodchips.

His question: How does it work? Our humble hosts weren't exactly sure, but we bet someone out there has the answer. What are your thoughts? Anyone have experience with a woodchip-mobile? Let us know!

You can hear Hans' call to Car Talk right here.

Our wood gas truck has racked up 1,500 miles running on wood chips and wood scrap, and is still going strong.

Lots of Google hits on this question. The one above had all the elements the called mentioned.

The device Hans asked about is called a “digester”. It produced methane from the breakdown of the cellulose in the wood. Plans (albeilt old) are still available from Lindsey Publications - a cool place for old technical stuff. BTW, I have no affiliation with them - I just like their stuff.

I read about this many years ago in a history of Volkswagen in WWII… there were Kubelwagens converted with a producer-gas boiler in front feeding the gases to the normal 1100cc engine in back.

The process is knows as “producer gas” or “reforming”. And yes, as strange as it seems, the CO (carbon monoxide) does in fact oxidize further , resulting in CO2.

Thanks, JimAAtGaTech! I am surprised Click and Clack don’t keep a computer fired up and look up this kind of info, but I guess it’s because they’d rather let us have the fun. Here’s a link I found: http://strangevehicles.greyfalcon.us/HOLZBRENNER%20VOLKSWAGENS.htm

yep, I’ve heard of this before, both in WWII and recently - look up “wood gas” in wikipedia.

Wood gas is a syngas fuel which can be used as a fuel for furnaces, stoves and vehicles in place of gasoline, diesel or other fuels. During the production process biomass or other carbon-containing materials are gasified within the oxygen-limited environment of a wood gas generator to produce hydrogen and carbon monoxide. These gases can then be burnt as a fuel within an oxygen rich environment to produce carbon dioxide, water and heat. In some gasifiers this process is preceded by pyrolysis, whe...

Don’t the guys know that CO can be oxidized further?? There is such a thing as CO2.

I saw one of these at the Peterson Automotive museum in Los Angeles. It’s a beautiful truck. There’s a picture in the link below: 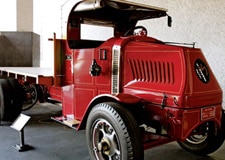 The Petersen Automotive Museum is a great vacation destination in Southern California for those who have some sort of liking for the history of the automobile. This museum will leave you with some great memories to trace back on. Only at...

From the Peterson website: “The same circumstances that made electric cars viable in Europe during World War II, also made vehicles that burned coal gas practical. Also called “wood gas,” the fuel was created by partially burning wood or coal to produce a gaseous substance that could be used for combustible fuel. Although the fuel gave poor performance and the gasification process created excessive air pollution, it was deemed acceptable during wartime because it allowed a large number of vehicles to remain operational with the addition of a special gasification apparatus and a few straightforward engine modifications. Bulky and unattractive, virtually all gasification systems were removed from vehicles immediately after the war and cars so equipped are now extremely rare.”

Which also suggests the weekly emissions on Saturdays between 10:00 and 11:00 AM in “our fair city” would be even more highly combustible - no open flames in the studio, ok?

also check out for more current applications of this technology: http://islandbreath.blogspot.com/2010/03/wood-burning-cars.html

Hans is not crazy. GM, Ford and Mercedes manufactured wood gas mobiles during WWII. They operate by passing oxygen and water vapor over coals. The carbon dioxide is reduced to carbon monoxide and water vapor is reduced to hydrogen - then both gases can be burned in a standard internal combustion engine. The gas mix is about 40% combustible.

These type of engines were largely referred to as Imbert Gasifiers (named after the inventor Jacques Imbert).

Wood gasification burners were very common in Germany during WWII. Here is a link to tell you more http://en.wikipedia.org/wiki/Wood_gas

Yes, Hans is correct, the Germans did have trucks and cars that ran on wood. The process was called gasification. During the Second World War, almost every motorised vehicle in continental Europe was converted to use firewood. Wood gas cars (also known as producer gas cars) are a not-so-elegant but surprisingly efficient and ecological alternative to their...

Wood gas is a syngas fuel which can be used as a fuel for furnaces, stoves and vehicles in place of gasoline, diesel or other fuels. During the production process biomass or other carbon-containing materials are gasified within the oxygen-limited environment of a wood gas generator to produce hydrogen and carbon monoxide. These gases can then be burnt as a fuel within an oxygen rich environment to produce carbon dioxide, water and heat. In some gasifiers this process is preceded by pyrolysis, whe...

In the reality show “The Colony” they make one with what they have in the factory they stay in for the 2 months.

I’m disappointed - you guys went to MIT & went to a couple of teacher colleges. It’s wood gasification!
I remember hearing about these back in the gas crisis of the 70’s when we were wood gathering hippies. I looked it up and sure enough the technology goes back to the 1830’s at least. Anyway, we got side tracked and didn’t go any further with converting our woods trucks but the info is out there as the guy above said “Google It” ( I had to look it up in the 70’s you can get more information now in less time that it took me to get to the library)

If you've ever wondered what we'll do after we've run out of cheap oil, other than eat each other, you have only to look to the Democratic People's Republic of Korea, a.k.a. North Korea. Ever since the shipments of crude …

I saw one of these in North Korea in the early 2000s and “googled” the following:

If you’ve ever wondered what we’ll do after we’ve run out of cheap oil, other than eat each other, you have only to look to the Democratic People’s Republic of Korea, a.k.a. North Korea. Ever since the shipments of crude from the USSR and China dried up, they’ve had to improvise.

So Dear Leader has once again demonstrated his Everlasting Beneficence and Ingenuity, pioneering the use of trucks that run on firewood and/or coal. Nowadays, if you see a truck, especially in a rural area, it’s probably running on “wood gas.” That’s carbon monoxide and hydrogen gas, produced by burning coal or wood in a low-oxygen environment – the resulting gas can be pumped into a diesel engine and in that form is a replacement for liquid fuels. Here are abunch of images of these wacky, steam punk-ish vehicles. And a video.

The use of wood gas to run engines was invented in 1839 and it was quite popular during the fuel shortages of WWII. Near the end, the Germans had half a million vehicles running on wood gas.

But you don’t always want to follow the lead of Nazi Germany, you know? Wood gas is pretty terrible for air quality, and it involves coal or biomass, which is pretty much always bad for the climate.

Yeah, http://en.wikipedia.org/wiki/Wood_gas has everything. Not sure why they didn’t just Google it.