A New Chevy Spark With Everything On It, Including Anchovies!

Domino’s Pizza, Roush Enterprises, and GM have teamed up to design a special pizza delivery vehicle that will carry 80 pizzas in a 140 degree oven.

What could possibly go wrong, right?

Will this begin a new wave of specialized delivery vehicles? 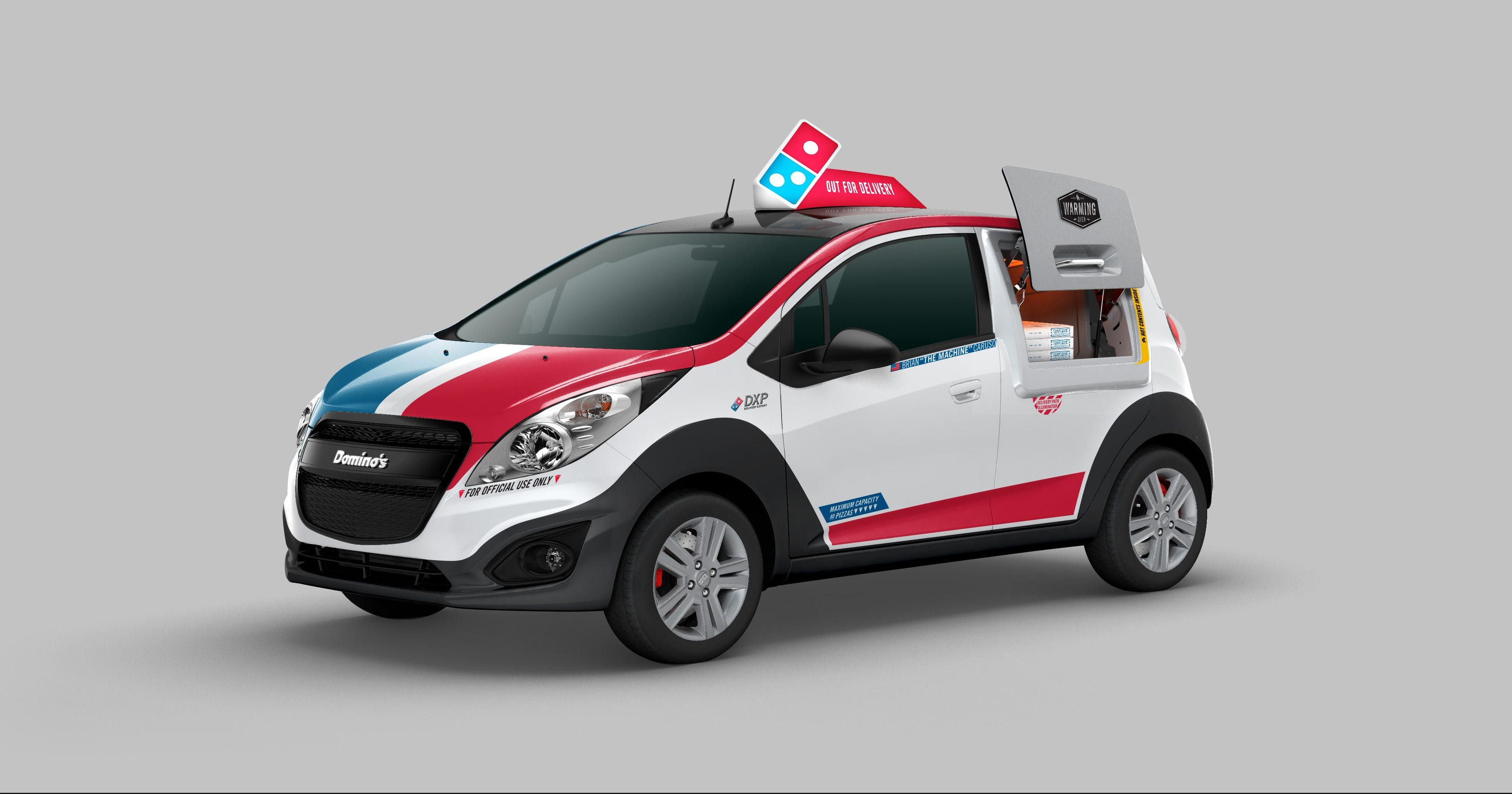 The first thing that could go wrong is actually paying the $25k that Domino’s wants to charge their franchisees for this vehicle.

Asking people to pay ~$12k OVER the MSRP means that the onboard warming oven is worth approximately as much as the car itself is, and somehow I doubt it. Even when you throw in the cost of the fancy paint job, the pricing of this vehicle seems to be outrageously high, IMHO. Luckily, it appears that nobody will be required to buy this questionable vehicle.

Other than agreeing fully with VDCdriver, there a couple of points not mentioned.

Throw in the name Roush and the price on anything always skyrockets.

“How is that going to make the pizza more tolerable…”

Good point, ok!
The only thing more questionable than the price of this vehicle is the quality of the so-called “pizzas” that Domino’s sells.

FIRST THOUGHT: I bet it’ll make it a lot easier to recruit and retain delivery drivers, since it’ll be miles and wear and tear on THEIR car and not YOUR personal car. Every time I’ve been to
Domino’s or places like it they’re always ALWAYS hiring delivery people. Besides the chance of being robbed, that’s the biggest drawback to a job like that, the fuel, miles, and wear & tear on your car, plus if you have an accident your insurance gets dinged. This takes all of that out of the equation. . . .

SECOND THOUGHT: Why would it need to hold 80 pizzas unless its being used as a catering wagon or in a place with a lot of big office parties? I thought the nature of pizza delivery was that you’re delivering 2 or 3 or 4 at a time or so. When someone orders a pizza, they don’t expect you to wait until a whole stack of orders pile up before you come deliver. They expect you to make the pizza and bring it to them, I’d say within the hour or so.

THIRD THOUGHT: Imagine getting rear-ended at a traffic light and being hit in the back of the head with a 140 degree pizza warmer. . . OUCH!

FOURTH THOUGHT: If you all don’t like Domino’s, whose pizza DO you like? I LOVE pizza and am always open to suggestions about where to get a good one. I always go for the carry-out specials myself. Notice most places say “free delivery”* but then offer some kind of carry-out special which is about half the menu price

FIFTH THOUGHT: Little Caesars has that “hot-n-ready” thing, but when you get one they always ask for your phone number - why? - I’m HERE! I always give them the phone number of the Domino’s down the street. (No need for my health insurance company to find out how many “hot-n-ready” pizzas I’m eating.

*“free delivery” - not really, anymore. Most of them now say in the fine print, “Delivery charge MAY apply.” MAY apply? You meant to say “WILL apply”. My parents, products of the Great Depression, taught me, “If you’re too lazy to go get it yourself, you’re not hungry enough to be eating yet.”

“If you all don’t like Domino’s, whose pizza DO you like? I LOVE pizza and am always open to suggestions about where to get a good one.”

Unless you live in the NYC/northern NJ Metro area, or in Connecticut, it is unlikely that you will find anything that qualifies as genuine pizza. Yes, there are some chain-run pizza places in this area, but nobody who knows what real pizza is like would eat there. The knowledgeable locals go to various Mom & Pop places for the real thing.

Where do you live?

Okay, I think I get it. It’s one of those “Dominos is to pizza like Mac Donald’s is to hamburgers” things, right?

SECOND THOUGHT: Why would it need to hold 80 pizzas unless its being used as a catering wagon or in a place with a lot of big office parties?

Also some schools get Pizza delivered for Lunch for the kids. That can be well over 80 Pizza’s.

This reminds me of a Jay Leno monologue years ago.

Remember when Domino’s had a slogan “delivered in 30 minutes or it’s free”?
And unfortunately several Domino drivers got tickets and accidents with a few that resulted people getting killed.

Leno’ Monologue - “Chevrolet announced a new Corvette. This Corvette is the fastest production car sold in the US. Domino’s Pizza ordered 1000.”

That would be an improvement around here where the guys drive 20 year old rust buckets and squeal around corners dashing from one 50 cent delivery to the other. $25K though is a lot of 50 cent deliveries though and most of the drivers here are contract drivers. Still a nice try for a general delivery vehicle but seems like most use an old Ranger or Toyota for parts and package deliveries. I’d dump the ovens and cut the price by $10K and give it a hatchback.

I’ve NEVER ordered a Pizza to be delivered to my house…EVER. Then one day…just as I get home Domino’s Pizza shows up and rings the door-bell. I figured he saw me pull in and was asking for directions…NOPE…My MIT graduated daughter (who was 14 at the time) ordered the Pizza. She had a crush on the kid who did the deliveries.

“Dominos is to pizza like Mac Donald’s is to hamburgers”

@VDCdriver, I was near Chatanooga, TN for work about 15 years ago. We went to a TexMex restaurant for lunch. One of our group grew up in Mexico. He said the meal tasted as good as his mom’s food - he was impressed, and amazed that great Mexican food was available outside the Southwest, let alone rural TN. We can find great food of all types in many places.

“We can find great food of all types in many places.”

That is true, but…How often will it be at a chain-run establishment?
Hmmm…

I do dominoes occasionally, pizza hut also. I am happy with the food, and yes do occasionally get a double cheeseburger from McDonalds. Sure I could be a snob after may years in the rest biz, 4 star restaurant manager, Maitre D, tableside steak dianne, ceasers salad, bannana foster, etc. making Beef wellington for banquets etc. I think the capacity is a bit on the high side, but they know the market better than I. Hope they don’t wait to fill 80 pizzas before they send the guy out! Sausage, mushrooms, green peppers onions, extra sauce extra cheese, cheese stuffed crust, yum, though have to do my fav myself, bacon and onion pizza, usually docter up a frozen.!

Mike, if you’re in the Nashua area, the best pizza in the world is Chaio’s, right next to the college. Totally handmade from scratch out of all fresh ingrediants in a family owned & operated place with the best food anywhere… especially their pizza, Trouble is, once you’ve had Chaio’s pizza you’ll never enjoy any other pizza ever again.

And if you are near lincoln park chicago oven grinders, caution cash only and no delivery by car (car related for cq)

There’s only 2 places in my entire lifetime where I’ve had great pizza. A now defunct I think city wide chain of pizza places in OK City and a motel across the street from a SAAB school I attended in Chicago.
The motel has a bar and grill with a brick oven and the pizza was outstanding.
Unfortunately, that was my first trip there and when I asked what beer the locals coveted I was told Old Style. What swill…

About 2 years ago a local guy was delivering Domino’s pizza in a Porsche Carrera. I suppose he could make the delivery PDQ but the maintenance cost per mile must be a killer.

I haven’t found the need to get a Pizza or any food delivered, but most of them are on my drive home. Little Ceaser’s has a deep dish version that i like but they’ve never asked me for a phone #.

Certain times of the year we get pizza’s delivered for lunch at work but always from a local place that will deliver fresh ones every hour, probably 4 at a time.