Are you asking how often it should be changed . . . or what tools to use?

Look in the owner’s manual, if you want to know when it’s due

As for the tools, use a diaphragm brake bleeder and the appropriate adapter . . . power probe specializes in this, they probably have one for your car

But it’s still a little early . . . the most stringent manufacturers recommend a brake fluid flush every 2 years, others say 3 or 5, some don’t mention it at all

I mentioned this in a previous thread but it’s always fun to gripe about dealer service departments - we were getting free oil and filter changes and tire rotations on our '16 Outback, dropped the car off for the last oil change and boom got a bill for $600. Service writer said they did all the 36K service. Including an expensive brake fluid flush which I never would have agreed to had I been asked.

Maybe @NickBernardi is just letting us know for safety reasons.

If he doesn’t post back that he’s done…within a week, we will go looking for him.

Too soon to change

What does the manual that came with the car specify? Many manufacturers say 2 years, some 3, a few go longer but I’m not convinced that’s wise without testing the fluid - several testing methods are available.

Whether or not a car is driven, the brake fluid absorbs moisture from the air through vents, seals, and flexible hoses and within a few years will both be at risk of premature boiling and causing brake fade during long or hard stops (potentially expensive, always exciting), and becoming corrosive eventually leading to failure of master and wheel cylinders/calipers, the ABS system, and the metal lines themselves, all of which can last the life of the car if you change fluid on time (I’ve gone 20-30yrs with several cars changing every 2 yrs). Fluid overheated by hard stops degrades faster.

Back to the 36K service, if this was ahead of schedule by the earlier or time or mileage, or even if it wasn’t, they shouldn’t do chargeable things w/o your permission. If way too early you might insist on a partial refund (or some free oil changes) - at two model years old your brake fluid wasn’t new and was going to need changing sooner rather than later.

What does the manual that came with the car specify? Many manufacturers say 2 years, some 3,

Thanks, recently flushed the Dot 3 fluid in the 2006 OB that is new to us at ~ 4 yrs and 30kmi. since previous flush. The fluid looked like tea, “medium dark” but no crud (don’t know whether color is a reliable indicator). Could remove only ~ 25% of fluid from the reservoir due to a “false floor” partition with narrow opening to the lower zone - only a small problem but it required a bit more fluid to flush, a 32oz bottle just made it, 4-8 oz more might have been better. Now have some small bore tubing from an iv bag (from hospital) to snake through to the reservoir bottom (will check for fluid compatibility first). Used the manual pedal push method, blocking the pedal to half stroke to preserve the master cylinder (2 person job, boring but works).

Vents are ancient history. Master cylinder caps have a rubber seal underneath that gets pulled down as fluid level drops. Absorb moisture through the seals and hoses? Interesting theory considering those seals and hoses don’t let any fluid out at 1,200
psi but let moisture in? Nonetheless, all the experts agree with you and none of them agree with me so there’s that. All I can say is this: in the old days of vented master cylinder caps and low-tech brake fluid, brake fluid started out clear, a year later it was amber, a year later it was dark, and after 3 years it was black with sludge at the bottom. I’ll give you this, in those days if you didn’t change the brake fluid regularly you’re absolutely right, your master cylinder and brake calipers/cylinders were toast.

These days the different materials used - like steel, iron and aluminum act like batteries if the brake fluid has any moisture. If you doubt water finds its way in, buy one of these brake fluid testers. They will prove to you that moisture gets in and stays in. 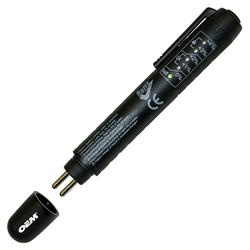 German car inspections use these and will not pass the car if there is appreciable moisture.