My 2017 Sportage has a bent radiator which has begun leaking at the bottom of recent. I never noticed this issue before having owned the vehicle for three years now. Having it serviced at the dealer they pointed out the issue. I have no idea how that could have happened especially when the condenser that sites directly in front of the radiator is perfectly straight, so if it was pushed in some how the condenser would also have been damaged. There is another complaint here with the same issue. I believe there is a defect with those radiators causing it to sag/bend at the very bottom. Any other info would be appreciated.

Definitely a puzzle how that happened. the only thing I can come up with, maybe condenser replaced at some point b/c of AC problem, and radiator damaged during replacement process. Seems unlikely radiator that was ok at install would develop a sag over time. If there’s a sag in the radiator, most likely it was sagging when it was installed, or was damaged later. Radiator replacement generally isn’t overly expensive. Often recommended as a pro-active maintenance item for aluminum radiators at around 10 year mark.

Replace it. Problem solved. This needs no further investigation. You are welcome.

So someone else had it before you

Maybe the radiator got damaged during the previous ownership

As said earlier, just replace it and sleep well

Many aftermarket radiators, especially Denso First Time Fit, have notches cut in the upper and lower aluminum edge. These are designed to prevent flexing due to thermal expansion, which could cause the radiator to leak or bend. Many OE radiators do not have these cutouts.

Here is a picture of the Denso First Time Fit radiator for the 2000 Chevrolet Silverado. When I bought this radiator, I had no idea what those cutouts were for at the time, but now if I was buying a replacement radiator, that’s a feature I would look for. 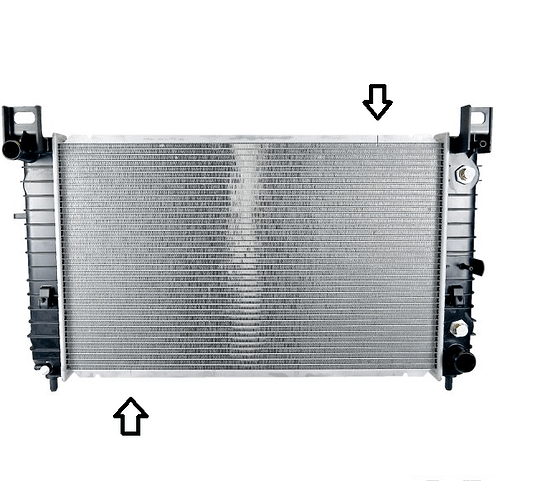 My daughter ran over a stick in the road, condenser fine but lower left radiator bent and leaking. Possibilities are endless!

Yep, just replace if it is leaking. Not quite sure what is leaking but I hit a racoon once that broke the bottom support off the radiator, so it is pretty low to the ground. Of course I lost all my coolant post haste. But yeah, any road debris etc. can wreck things, or age.