We own a 2017 Ford escape. can any one tell me what purpose other than acting like an anchor to hold ice behind the front wheels the rectangular hole in the front wheel well behind the tires serves. Back tires all you have to do is give a kick & ice falls off, front tires you have to beat with a hammer or ax to break loose too keep from shredding your tires. Who ever put that in must have grown up in a warm climate. Also any chance any can make good vehicle with out all the useless & expensive electronics? One you can replace a headlight for a couple of bucks like in the god old days not 100’s 0f $ like now, or a bumper you can use too jack up your car without having to get on your hands & knees looking for a " jack point ". Our Escape had a hit & run that left a small crease in thee hood that a spaghetti strand could have filled, not reparable, had to replace the hood… Why can’t cars bee as solid like they used to be?

Why can’t cars bee as solid like they used to be?

You can feel that way all you want but those days are gone . I and others don’t miss those so called solid vehicles. As for what you mean by bumper jack , they were terribly unsafe and actually the bumpers today provide much better protection and the bumper covers do help with airflow.

Also any chance any can make good vehicle with out all the useless & expensive electronics?

It is possible if you have big bucks or great skills, tools, and garage space. Kit cars.

The old bumpers were able too take a hit a lot better than now ,cars were made of steel not plastic. They got U where you wanted to go in style without accident causing distractions & entertainment centers .

Maybe an opportunity here for us old geezers/shade tree mechanics where you didn’t have to be an aero space engineer to do your own simple repairs and most were . Just simple solid dependable cars , I hear used cars are gaining in popularity, the big boys are pricing & hi teching themselves out of market share.

The old bumpers were able too take a hit a lot better than now ,cars were made of steel not plastic.

An example of this is the 2002 retro Ford Thunderbird, it returns as an ugly fish, those 1955 pointy fenders would gore a pedestrian. 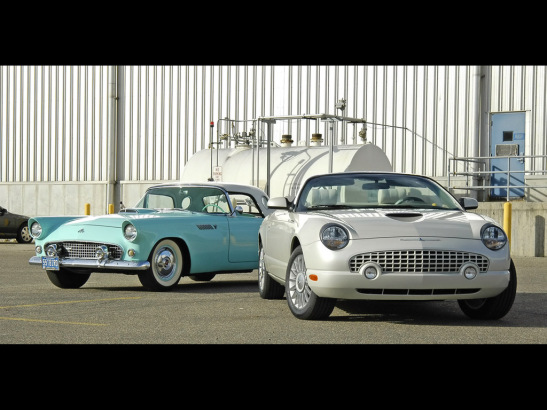 Modern bumpers are stout steel under those rubber covers. Those old stout cars survived crashes better than today’s cars but usually killed the occupants in the process.

I would prefer however more simplicity and easier repair in today’s cars.

Your right ,entire modules have to be replaced .

Even worse is the giant open space in the top of the fender. On our Escapes at work, those function very well as nesting boxes for squirrels, who then scamper around under the hood and chew through wires and the washer fluid hoses.

I’ve been annoyed with that divot for the same reason as you. I keep trying to get the general manager to change which cars we buy, but we must be getting a really cheap deal on these.

Also any chance any can make good vehicle with out all the useless & expensive electronics?

This is something my mom complains about every time she buys a car. What she, and you, don’t consider is that the car companies are not making cars for Joe49. They’re making them for the general public, and the general public wants the toys.

As for the bumpers, the days when bumpers could be used as jack points are also the days when a front-end collision transferred most of the collision energy to the driver instead of the car’s crumple zones (which includes the hood). Yes, modern cars cost more to fix than old cars. But when you got into wrecks in old cars, you were more likely to be killed, which many would argue is worse than having to pay money to fix the car.

When Hollywood stunt people jump out of a building for a movie, they land on a giant cushion filled with air that collapses and softly slows the impact down so that they don’t get hurt. If they were instead to land on a giant solid slab of steel, they would die and annoy the producers.

As far as the openings, can’t you duct tape them?

It wasn’t the accident that killed him, it was the sudden stop at the end

Thank you ! Nobody at the dealership knows what those cavities are for either.

Thanks ! I have and works well while tape stays on.

There are millions of Americans who will spend the night in line at a mall hoping they can be among the first to buy the latest $1,000 gadget on credit and hope they don’t lose their job when they miss work in the effort. And those are the people who determine what’s popular from cell phones to automobiles. Basic reliability and value are blase’ these days and those who still appreciate those qualities don’t get much attention.

Thank god for that. People in cars don’t have any more right to the roadway space than pedestrians…and when people are driving too fast for conditions, get distracted by a text message, etc., and they slam into someone in the crosswalk, I am happy to know that person will not be condemned to death due to a “better” bumper in some 60s-era piece of crap monstrosity.

I don’t have a good idea of what the holes you are describing look like, but could you take a scrap piece of plastic packaging or even a piece of fender liner that you get at a junkyard and pop rivet it to cover the hole?