No question, just a statement. My Toyota Camry sunroof exploded today for no reason.

. I turned it in on my insurance, but doesn’t seem fair, when it’s a defect.

It is not a defect, sometimes glass breaks for a variety of reasons.

Tempered glass can do that. 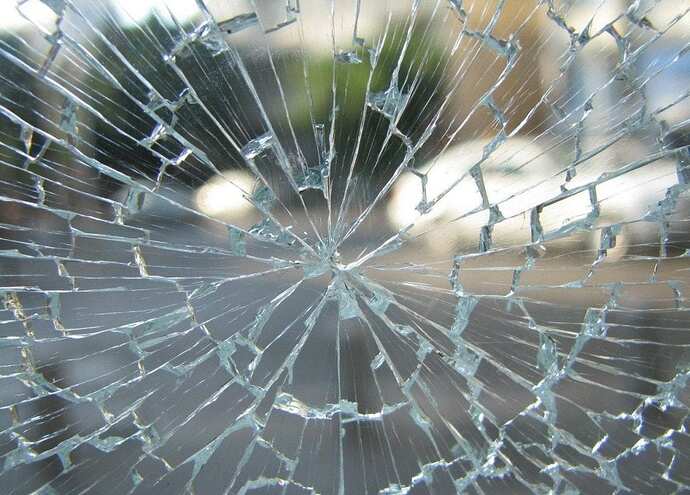 Spontaneous Glass Breakage: What is it and What to do if it Happens - Kryger...

Spontaneous glass breakage is rare, but it happens. Kryger Glass discusses what it is and how to prevent it in your windows.

Were you in the car when it happened? I hope not, something like that can scare the daylights out of you and put you, your passengers, and anyone near your vehicle at risk.

I had a 1984 Mercury Lynx Hatchback. It had a large back window with a built-in rear window defroster. Back then the defroster was little more than “rows of conductive material that was ‘painted’ on the window”… The material was somewhat fragile and the auto parts stores sold small bottles of the solution (like brown nail polish…) to repair the shorted rows.

I used that stuff on numerous occasions to patch the bad rows. I did notice that wherever I had repaired, that area defrosted first and cleared the largest area of the window. So I figured that the resistance was greater there, therefore warmer…

I was going on a long trip and started out early in the AM. It was winter in Virginia and the car was well frosted over and I turned on the rear defroster and I apparently forgot about it (no built in shut-off timer) and I was on the expressway at about 70 MPH when the window blew and I mean BLEW. It showered me with a gazzalion bits and pieces of tempered glass. The Lynx design meant that there was a lot air pressure on that back window and when it blew, the glass blew into the car and showered me. Luckily for me, it was still “0-dark-thirty” and there were no other cars in the immediately vicinity as I slammed the brakes on, not knowing what had just happened. I was blinded by the glass pieces in my eyes and I limped the car off the roadway, put on my emergency flashes and almost died from the pain. I knew better that touch my eyes. A tucker, seeing the missing back window, pulled over and called the state police on his CB. I was taken to the ER and they removed the glass. Again, luckily, there was no permanent damage to my eyes. The State Police said the window probably blew from the defroster running continuously and resulted in a hot spot.

That’s my story and I’m sticking to it…

However, years later, my wife and I were out in the driveway and we happen to be watching the crows in the neighbor’s back yard. The took off and flew over us and to our amazement, one of the crows dropped a stone and it bounced off the roof of the garage and then bounced onto the roof of the car. The stone left a small “nick” in the paint but could have caused more damage if it had hit the car directly…

So, if you were not there to witness that window blowing, besides uneven heating from the sun, perhaps a bird dumped more than a load on your roof.

Did you have “the crackle” before? (Not immediately before, I mean for years and years, where occasionally an awful crackle sound would happen from time to time?)

I more know that a lot of Camrys of that generation had an annoying sunroof problem where when closed, it made an unpleasant sound.

Keep in mind I have no idea on whether there’s a connection (I haven’t seen any of the Camry owners with the crackle say theirs shattered.) I do know my Camry had it, and it would come and go. And when it wasn’t doing it, I would stop using the sunroof at all, and I would have peace and quiet. Then by coincidence, my sunroof switch went dodgy, so I hardly ever touch the sunroof any more. I’m not up-to-date on the topic any more, but most people use the term crack, pop, or crackle when discussing. Again, no idea if the shattering is directly related or not.

It lasted approximately 8 years under who knows what conditions. Not likely a manufacturing defect.

when it’s a defect.

How can it be a defect on an 8 year old car? It’s far out of warranty.

As a couple of other forum members already stated, if it was defective it would have failed many years ago–most likely well within the warranty period.