Check engine light came on a few days ago and it turned out to be a p0141, o2 heater sensor circuit bank 1 sensor 2.

I let the car cool overnight and took my reading earlier before starting the car. I’m not sure how important this is but it mentions a temperature for the spec so I figured I’d include it.
The two o2 sensor connectors were easy to get to so I traced the top connector to a sensor behind the manifold and the bottom one behind the cat. The bottom connector had two white wires, a grey and a black. I took a resistance reading on the pins for the two white wires of the bottom/downstream connector and got 11.1 ohms (twice). Spec is listed at “approx” 9.0 ohms (68F). To me this leaves room for interpretation. Considering the 2.1 ohm difference is 23% of the total spec value I’m assuming this is out of spec, I just want to be sure though before I lob an o2 sensor at it. 1 ohm is obvious and so is 20,000 ohms but what about 11.1?

The car told you the downstream (after cat) sensor’s heater is bad. I’d just replace it.

Now the instructions tell me pin numbers 3 and 4. You post the colors you tested. I can’t see the numbers and their respective colors out here on the internet. You must TELL me if the white wires are #3 and #4

Given these things are cheap, the heater failure is a VERY common issue, and you didn’t say the wiring is buggered up, just replace the sensor, the heater is bad. Or don’t and leave the CEL on. A bad heater won’t hurt performance, it just keeps the CEL lit.

Prior to writing this reply I went off “the two same color wires are typically the heater wires” or “the two white wires” I’ve heard that a few places. Probably not the best thing to go by given manufacturers can probably use whatever they want on their parts. Originally I couldn’t find the diagram but now that I know to search under “engine control” or “fuel control” I think I’ve learned something. Red and blue seem to be the wires associated with the downstream sensor so I’m figuring it’s just a matter of simply looking at what color that ends up being on the sensor side of the junction where it connects to. 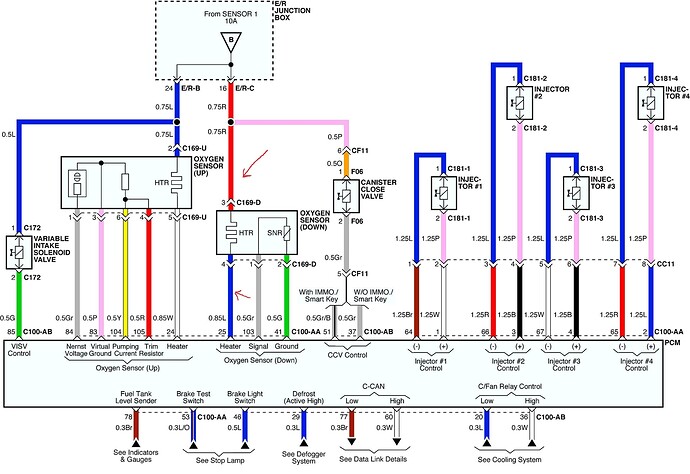 Think I’ll go ahead and replace though as you suggest. It’s kind of low and far back but I think I can reach it with one of those offset sockets given the space granted me from this tiny engine.

The colors sometimes change from ecu to sensor.

The pin number is on the connector.

An open end wrench may be useless if the sensor is stuck very tight. And it will be.

If you cut the wire off the sensor, you can use a box end wrench. Smack the middle with a hammer to knock it free.

If it says 1-2 ohms, I’m guessing the sensor’s resistance heater is probably not the issue. Replacing the sensor might still help however if the problem is the sensor’s electrical connector.

If you cut the wire off the sensor, you can use a box end wrench. Smack the middle with a hammer to knock it free.

In a pinch I’ve even used a 12 pipe wrench and a length of pipe.

I’ve even used a 12 pipe wrench and a length of pipe.

Not many things on my Corolla a 12 inch pipe wrench would fit, space too tight. Reminds me of the tv advertisement last night “Buy this and you’ll never have to buy any wrenches!!” Sort of a universal socket gadget, fits any size bolt, but so large, it would hardly fit anything inside a car engine compartment.

The colors sometimes change from ecu to sensor.

I went back out earlier and confirmed the red and blue correspond with the white wires.

Smack the middle with a hammer to knock it free.

Thanks for the tip I figured it would take a bit of persuasion.

What does the ohm meter say?

That wouldn’t explain your 11 ohms heater element measurement then. But it does mean the actual heater element resistance is 10.8 ohms, not 11 ohms. The downstream sensor is spec’d from what I see at “approximately” 9 ohms. Takes Houdini to figure out if 10.8 is “approximately” 9.0 … lol … I remain doubtful the 10.8 ohm sensor resistance is the actual cause of this problem. If you decide to replace the sensor, be sure the take your ohm meter with you to the parts store and measure the resistance of the new one. If it measure 10.8 ohms as well, might want to consider to put that purchase on hold.