The gasoline version Cruze Eco that is available now in the U.S. gets 42 MPG. The Cruze has been selling like hot cakes (partly due to an earthquake induced shortage of competitive Asian models).

Would you pay a premium price for a 50 MPG diesel Cruze over a 42 MPG gasoline Cruze or would you consider buying a Chevrolet at all ? Rather have a Prius ? Too early to tell ? Too much speculation ? Comments ? 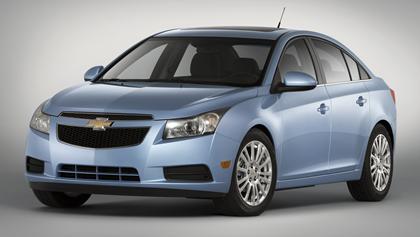 General Motors has decided to sell in the United States a diesel version of its hot-selling Chevrolet Cruze compact.

Any Cruze drivers out there ? I’d like to hear about your Cruze impressions.

From a practical standpoint a car like the Cruze is at it’s best as a second car for short trips or commuting to work.
Will 50 vs 42 make up for the price of diesel fuel vs regular gasoline?

I would be interested in a diesel Cruze a few years down the line. Three of four vehicles I’ve bought since 1988 have been Chevrolets from the same dealer and salesman. Not so much brand loyalty as how I’ve been treated by the dealer over the years.

I bought a 2010 Cobalt last year and have been pleasantly surprised with the performance and ride. Seat comfort leaves a bit to be desired, but a good quality set of seat covers helps. I’m confident the Cruze would be a big improvement.

The Cruze looks good and I would have no problem driving one across the US . That said when you compare a 40 mpg car to a 50 mpg car you find that diminishing returns makes the savings less … and the real deal killer for me is that diesels are cold blooded ! They take a long time to warm up and if you park outdoors you will be cold for a long tome after every overnight Winter start .

“The gasoline version Cruze Eco that is available now in the U.S. gets 42 MPG.”

I think you will find this is true only under extremely favorable circumstances. The Cruise Eco does NOT get 42 mpg on a day-to-day basis. It might achieve 42 now and then, but claiming it “gets” 42 is misleading.

No, I wouldn’t pay the premium for a diesel to get a few more mpg. There are diesel cars available now, and I’m not buying one.

There are advantages to diesels other than fuel economy. Diesel engines tend to last longer than gas burning engines. If the fuel savings don’t allow you to recover the extra money you pay to get a diesel, the extra longevity of the engine might.

"I think you will find this is true only under extremely favorable circumstances. The Cruise Eco does NOT get 42 mpg on a day-to-day basis. It might achieve 42 now and then, but claiming it “gets” 42 is misleading.

From the USA Today article :
" . . . – the Cruze Eco model is currently the highest-mileage conventional gasoline-powered car sold in the U.S., with a 42 mpg highway, and we at Drive On were able to get nearly 50 in one with careful highway driving recently."

CSA, I think you just made MCP’s point. It is misleading to quote only the highway MPG rating. Instead, you, and advertisers, should be quoting the overall MPG rating, which is a combination of city and highway driving, and falls somewhere between 28 and 42 MPG.

I’m with Keith. Unless the price of the diesel was significantly less, I’m not sure I particularly care about saving $871 over 10 years.

I would not pay a premium to buy a diesel of any make. Historically diesels have not sold well in the U.S. even when the price was competative. I’m puzzled as to why GM believes this to be a good move.

That doesn’t mean much to someone who has never replaced a vehicle due to a worn out engine.

It is a misconception to believe that diesel engines inherantly last longer than gas engines. This perception comes from two sources, one that diesel parts are more robust due to the higher compression ratios used (they are) and two that semi truck engines seem to go on for a million miles.

Semi engines are designed to be able to be rebuilt quickly, efficently, and still in the chassis to get the truck back on the road. An engine with a million miles may have had several cylinder sleeves and have been rebuilt several times.

I would definitely buy one, especially with the $5/gallon gas prices we’re experiencing this summer. Oh, wait a minute, whoever predicted that on this board was WRONG!

Keith makes a very strong argument for “why bother?”

I agree TSMB, modern car diesels are very complicated to meet pollution standards, plenty to go wrong. I checked out a new Ford pickup with the diesel: looked like the insides of the space shuttle!

And those old ‘reliable’ Mercedes diesels? They interviewed a guy with one that’s gone 1,250,000 miles - he rebuilt the engine every 250k.

Whitey Says I Was Misleading To Indicate 42 MPG For The Gasoline Cruze Eco.
" It is misleading to quote only the highway MPG rating. "

I did not intend to mislead anybody. I thought that 42 MPG HWY was fantastic even for highway travel and certainly didn’t think it would be taken as “Combined MPG”. I was so surprised that the vehicle could achieve 42 MPG Hwy that I actually had to verify it on the EPA’s site. To find that people claim up to 50 MPG HWY is, to me, almost unbelievable. Chevrolet should be recognized for this achievement, especially when you look at the whole car as I did at a rental agency. Do any gasoline cars (non-hybrid) ,sold in the states, get close to 42 MPG combined ?

Another thing, would you believe that some folks go more by HWY MPG than City MPG or Combined MPG ? We do. Where my family lives and drives we get EPA HWY MPG or better with our cars. We have one or two stops in a typical commute of 20 to 50 miles.

Besides Whitey, did I mislead anybody that thought 42MPG for a gasoline powered U.S. car was a Combined mileage MPG or City MPG figure ? If so, I apologize for my oversight. I should have specified HWY to make it more clear.

It sounds like there’s quite a bit of opinion that the diesel’s not worth a premium price. Regarding why GM would even bring one here, maybe they’re looking ahead to new fleet averages coming from Washington.

In my experience small diesel engines in cars get far better fuel mileage in ordinary, stop and go urban traffic. It seems like they consume a lot less in this sort of commuting situation. I suspect this conversation is very different, depending on whether you live in a crowded urban area or a spread out suburb or in the country. I have a 5 1/2 mile commute and there are 28 traffic lights.

So I ride a 250cc motor scooter and get 60-65 mpg. Works for me, but I’m in California where the weather is mild and the rain is predictable and seasonal.

Diesels tend to have much lower idle and low power fuel consumption than an equivilent gasoline engine does and that helps boost the city gas mileage. This low idle fuel consumption also probably contributes the ‘cold blooded’ nature that someone else mentioned. You gotta burn fuel to warm up an engine.

I agree. We aren’t there yet and without govt. support diesel is too darn expensive. I like diesel in trucks and tractors where HD reliability is important. Diesel is too valuable for teens to be using running around like we use to and competing with long haul trucking. The last thing we need is another reason to raise the price of diesel any more cause by people want to buy a bunch of new Chevy Cruzes so they can text while they drive a little farther down the road and put more pressure on diesel supplies. Let gas be the vanity fuel.