My wife has a Quest that a few weeks ago wouldn’t start due to a dead battery. I tried to jump it with my car to no success. I climbed into the back to open the trunk to get some thing out of it and discovered that the deepest compartment of the trunk was filled with a few inches of standing water. This is where the previous owner had a stereo system installed which was partially submerged. I drained the water out and after taking the battery out saw that it had no markings whatsoever except a sticker with 01/2020 on it so I assumed the battery was just old and got a replacement. Car started up fine and all was well. This car rarely gets driven though and about a week later (this last Saturday) I got into the car to grab something and saw that the battery had died again. Today I tried to jump it again to no success and I decided for fun to check the trunk again and sure enough it was full of water. I’m in Florida and it’s the rainy season so this seems likely to happen again unless I can figure out where the water is getting in. After some research it seems that possibly the tail light seals are the culprit; I will check them tomorrow. The bigger question is are these two issues related? Is the water shorting out some electronics in the stereo that is causing a drain on the battery or something? After the battery replacement the car was locked up and not driven again until when I discovered it had died again so I can rule out any lights left on or anything like that. The car was sold to us in great shape and we’ve had no issues in the 18 months or so that we’ve had it so far.
Any help is appreciated. Thanks!

I would remove that sound sysem until you get the water leak fixed . It getting wet will do it no good. Any decent body shop should be able to solve the leak problem if you think you can’t do it.

Running a parasitic drain test would answer your question. We’d just be guessing. My guess is the water has nothing to do with the battery drain.

In a 10 year old vehicle, I’d be considering drilling a drain hole to let the water out and trying to fix the seal.

I would pull that radio out of there first. When I first got my car I had a hitch put in. A little later discovered water where the spare was. Checked all the seals and even resealed the seams around the lights. Still water. Finally crawled under and found a grommet not put back wen they ran the wiring. So you have to look and run a hose from top to bottom to see where the water is coming in.

Any electronic devices that have been in contact with water should be removed from connection to power. It seems that the amount of water that you are getting inside is a significant amount. I doubt that the taillights would leak that much water in. If you have a sunroof that may be where the water is getting in at. You could seal the window area with some plastic and tape to see if that clears up the issue. Other side windows may be the cause also.

As it was getting dark last night and starting to rain again I did duct tape some visqueen onto the back half of the car. It has 2 moonroofs (moonrooves?)
and I considered that possibility but both my wife and myself inspected both of them and saw no signs of moisture. The cabin is bone dry so if water is getting in via any windows it’s got to be between the door panels. If the moonroof is leaking, is there a pathway for the water to drain down the side and into the bottom of the car?

Not sure if it’s relevant but I also think I should mention that the driveway is somewhat steeply inclined and the car is usually parked with the trunk on the declined side by the street.

I have to think there is an inner structure to the roof that the water could travel to the back end of the vehicle, since it is parked on an incline.

Then why haven’t you removed the plug?

Many cars have body plugs so that is entirely normal. They may look like the pic below. I also tend to think this electrical problem is not related to the water. A parasitic draw test needs to be done to find out what is going on. 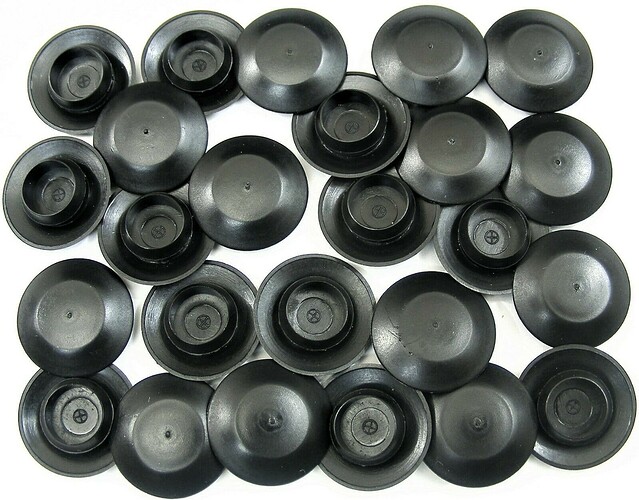 So leave them out of the rockers or put them back in?

If I had that problem I’d focus on fixing the leak problem first. Definitely check the tail light sealing, common source for sedans; but tail-light leaks less common for SUV’s. Remove debris, leaves/twigs, in the area/channels where the moving parts seal to the body when closed.

If it still leaks, run a small garden sprinkler over the top of the vehicle , while somebody on the inside looks for leaks.

Unlikely that Nissan installed a removable drain plug b/c they expected water to accumulate inside the car. The plug is probably there for some option your car doesn’t have. If removing it drains the water out, temporarily removing it seems a sensible thing to do of course. Caution advised, open hole could allow exhaust gasses into cabin. First priority, fix the leak. Good idea to ask your shop remove the power connection to the entertainment electronics in the wet area as well.

$20 for a tube of seam sealer at Napa, but I’d check other causes first.

We’ve been getting rain pretty much every day this week, and when I get home from work the first thing I do is check to see how much water has accumulated in the trunk. So far it hasn’t been much (pic shows about 2 days worth but the plug hasn’t been in there so the water would drain if it filled past that point). 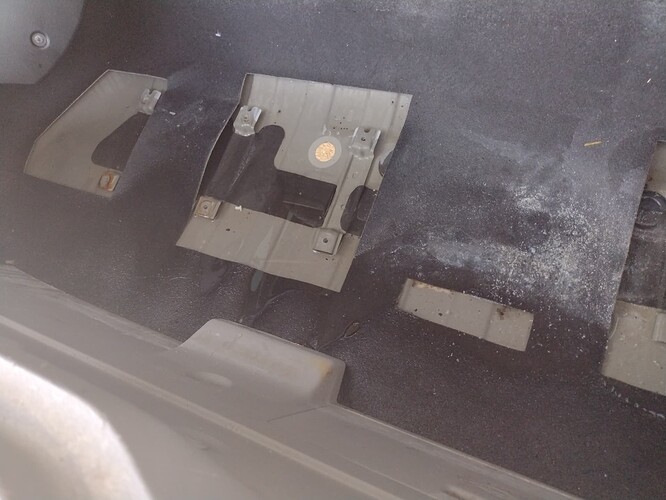 So being that my battery is dead, I couldn’t open the sunroof to gain access to where the drains are to see if they are clogged…so I started checking from the bottom in the wheel wells where they are supposed to drain out and I had trouble locating them. I think they must be obscured by some of the undercarriage frame steel. I had my son pour some water on the top of the car at the corner of the sunroof and I could not see where it was exiting. As I got up I saw this on the inside of the trunk. 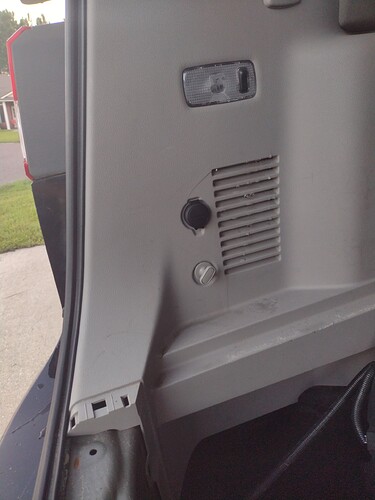 I think I know where the water is coming in from now, but can anybody point me to some kind of procedure for taking these interior panels off?

They likely just snap in place but check for a few hidden screws behind covers etc. there are plastic panel tools that are helpful. Still can’t see where you think the water is coming in or how it would get there from the sun roof, but if you found wet there, follow it back I guess.

can’t see where you think the water is coming in

There’s water drops on the grill to the right of the black circular object.

Not sure if that grill is for a speaker or for air circulation, part of the hvac system. If nobody here knows how to remove that panel, a dealership shop would know, no harm asking there; or an aftermarket repair manual (Haynes, Chiltons) might have that info. The manufacturer’s repair info via internet is probably available for a small fee (short term use) at their website. If you just want to have a go at it yourself sans instructions, good idea to use plastic panel removing tools mentioned above, otherwise risk breaking the plastic. This is the one I use.

Generally the way panels like that are removed, first you have to remove knobs, lighting fixtures. Under them you may find some panel-attachment fasteners. Often the panel on top has to be removed or at least loosened before the panel at the bottom will come off. The panel itself is often held on by small spring-loaded clips; prying at the right spot on the edge of the panel pops the clip. Prying on the wrong spot may break the panel. It’s a gamble.

My guess , removing that panel won’t make it possible to fix the leak. That will have to be done by repairing something on the outside of the car. But the panel underside may point to the outside leak source. Before removing the panel, is there anything on the outside surface of the vehicle opposite or immediately above above that grill? Side marker light? If so, pretty good chance that’s the culprit. May just need a replacement gasket

Ah I see the little drops now. Water is elusive if you ever had to trace a leak. Can be coming in far away and following a downward path. I guess I would pull the panel but only to try and trace the path. I pulled the panel on my Acura once, just spring clips, but underneath is just the inner sheet metal and wheel housing. Access to the outer quarter panel.

Might want look at an oem dealer body parts diagram to see how it all goes together and what is above and forward. The diagrams for parts ordering can be quite complete with every fastener detailed. I only look at Gm an Acura though so no idea about Nissan though. Clue, a lot of stuff is pretty universal among manufacturers. They just copy each other or use the same designers to save money.

The tail light is the only thing sort of nearby, but it’s too far to the rear of the car and also I had plastic sheeting covering the car for a few days during the recent storms and the water accumulation lessened quite a bit so I don’t think that’s where it is. I covered the rearmost sunroof yesterday just as a little more rain was coming in and placed one of those super absorbent drying cloths in the bottom and when I got home a few minutes ago there wasn’t any standing water in there anymore. Another storm is rolling in now so I’ll probably have to leave it alone for another day. I might pick up those panel tools on my way home tomorrow; I was thinking of getting some already. My main reason for opening up the panels is with the battery to the car being dead (and it not taking a jump), i cant open the sunroof to check for any leaks there yet so I’m trying to work backwards and see if the leak is actually further down the line first. I consider the water intrusion more immediate than the battery issue at present and I still don’t know what kind of damage to the stereo and/or electrical system might have occurred because of the water, if any.