My 2010 Camry xle would not crank, or show any electrical signs so I attempted to jump crank it from another car battery. The lights then came on and the gear shift would work while the other car was connected and running, but after ten minutes of charging off the other car, It still would not crank.

Takes longer than ten minutes to charge a battery.

if battery is so bad that it can not run lights, it is good chance that once car will get running, it will either fry the alternator as it tries to charge the battery OR it will fry some other electronics in the car as the battery is not able to limit the voltage and the spike has a chance damaging something else

in the end, it will be much-much less expensive to go get a good replacement battery and fix the problem properly

Don’t scare people. The alternator will NOT fry anything, the internal voltage regulator will prevent that and limit the output to ~14.5V.

the battery is not able to limit the voltage

A battery does not limit voltage. It puts out whatever is in it. If overcharged it will stop charging at one point, overheat and probably start a fire if not stopped prior.

We’ve talked about this many times on this forum, and @thegreendrag0n is by no means the first or only one to bring it up

Your battery needs to be recharged using a battery charger to charge it. Even a 10 amp charger will take many hours to recharge the battery, if it is in good shape still. If the battery is in decent shape it will have a pretty good charge on it after a couple of hours of charging but will still need to keep charging up. You may have to replace the battery.

That would be impossible on a 2010 car. The alternator will put out voltage as long as the engine is running, regardless the state of the battery.

Say what you want, but don’t be surprised if somebody states otherwise

We’ve been through this countless times on this very website, as I already mentioned . . .

It’s like those conversations about evap codes, cat codes and so forth

There can be no winners, and nobody’s switching side(s)

There can be no winners, and nobody’s switching side(s)

What’s your problem, it is not a winner or loser thing. You seem to have big problems when someone has a different opinion from yours.

I don’t have a problem

Not everybody’s going to agree with you all the time

Kurt , a simple web search seems to confirm that recharging a dead vehicle battery just by the alternator will in most cases shorten the life or even cause failure of the alternator . So telling people that it is Ok to do that is not really a good idea.

I read blanket statements like that also, but have yet to find an explanation of how this can happen.

Mechanically it is impossible for a car alternator to stop producing current when the engine runs. The alternator does not care whether the battery is charged or dead and pumps out a steady current of ~14V or thereabouts. Worst-case scenario the battery shortens out for whatever reasons and diodes will prevent backflow to the alternator. And, a dead battery will never produce sufficient current to destroy the diodes.

There are exceptions for later model cars, but this does not apply to OPs car.

If this is wrong, please someone explain to me. 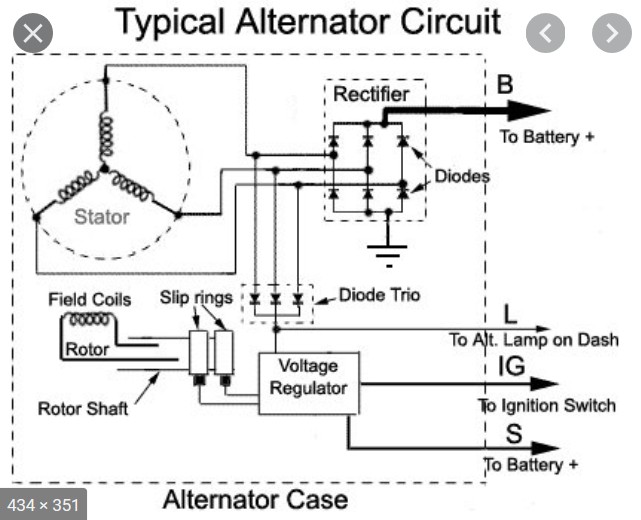 Kurt, looks like your school physics course needs a refresher.

Mechanically it is impossible for a car alternator to stop producing current when the engine runs.

#1. Alternator produces VOLTAGE, current comes into the picture once you have a LOAD, through which CURRENT will FLOW

#2. Once you do not “excite” the rotor by applying the electric current, it will stop producing the magnetic field which is needed for the stator to produce any voltage

The alternator does not care whether the battery is charged or dead and pumps out a steady current of ~14V or thereabouts.

Current is measured in Amperes, Kurt.
Yes, indeed the alternator will try producing the steady VOLTAGE, in vicinity of 14V, yet once again, it is not current.

Worst-case scenario the battery shortens out for whatever reasons and diodes will prevent backflow to the alternator.

I’m puzzled on how to dissect this argument

#1. If battery “shortens out”, it is nothing to “back-flow”, end of story for the back-flow

#2. If battery shortens out, it will raise the current through the alternator through the roof

The Ohms law still reads as I = U / R, even on the modern cars, so once R becomes too small, I (current) would raise very fast.

This is where is a potential to damage alternator: it has no current limiter and it will eventually overheat and either coils or diodes will damage.

#3. Do not forget, the diodes are there primarily to perform the AC rectification into the DC, and backflow prevention is a nice and desired side-effect

And, a dead battery will never produce sufficient current to destroy the diodes.

You can have two cases here:

#1. Battery with one or more shorted cells => in this scenario you can indeed get intoo the high-current situation I described above and get the alternator literally “fried”.

#2 Your battery is so much sulfated that it barely gets the lights going.
In this situation, you will indeed not get the high-current, as the load will not be able to generate that, but you will get into even more dangerous situation.

Normally, the working alternator will regulate the voltage to be steady, but it will do so by the increasing and decreasing current in the rotor as needed, so it is not exactly “steady”, it fluctuates around the target value. The good quality battery is important here to provide the leveling capacity, same as power supplies have capacitors to filter the voltage spikes and sags.

Now, for the currents alternator is capable producing, placing the true capacitor in the circuit would not be practical, as it would have to have a huge capacity to provide proper spike leveling, so the battery is doing the job.

The alternator is not able to regulate its magnetic field with a high precision, so battery is also a fail-safe device, limiting possible voltage spikes as loads are connected/disconnected.

Now, imagine the battery has not enough capacity even to keep lights going as OP reported, would it be able to serve as buffer and spike limiter?? Sound NO!

Yes, vehicle electronics is typically designed to tolerate quite a lot of abuse, but this is not the justification to recommend other people that abusing the car electronic systems is safe.