Shortly after buying our '66 Ford Galaxie 500, my father had a local auto electric shop install an aftermarket Eaton A/C system in the car. It was cheaper than another aftermarket A/C system that was available, and it was… adequate. I think that the more expensive system was the Mark IV, but my memory might be faulty on that point.

It is possible that the more expensive system might have been more effective than the Eaton system, but–of course–the big limitations of any of these aftermarket systems are that they can’t draw-in outside air, and you couldn’t seat someone in the middle of the front seat with these units hanging under the dashboard.

About 30 years ago I had a chance to buy a 78 Ford Granada. Yeah, I know…ugh.
Six cylinder, automatic, and straight both in and out for a measly 150 bucks. The big problem was no factory A/C and which in summertime OK is a huge problem with temps running 100 to 105 every day.

So I went rummaging in my basement and built a system. An underdash unit from a Ford Falcon, an air compressor from a Subaru, and a condenser from a Nissan pickup. The drier came from who knows what. All of the hoses were made by cutting and cobbling together a bunch of random unknown bits. Surprisingly it only took me about 6-7 hours to do all of that and have it up and operating. The only cost was refrigerant and refrigerant oil.

The A/C worked great for several years until I sold the car.

It is pretty common to see restored 1960’s cars with an under-dash add-on AC unit around SW Florida. No one seems to mind them because it is period correct for the era. A neighbor installed AC in his 56 Chevy convertible because his wife refused to ride in it to shows without AC. Or at least that was his excuse!

Those old cars had tons of under-dash space as it was so they fit pretty well.

Those old cars had tons of under-dash space as it was so they fit pretty well.

The condensate drain hose on our aftermarket system was very close to where the passengers would put their feet, and it wasn’t unusual for someone to accidentally kick it out of place. However, the increased road noise when this happened was my clue to pull over and put the drain hose back into its hole in the floor before the rug got saturated.

You can still find the direct descendants of those “hang on” ac systems on many walk-in vans, the big ones that look like delivery vans and ice cream vans

They’re actually built without ac, and the bodybuilder decides which ac system to configure it with. The whole in-dash unit comes with its case, which includes the evaporator, txv, knobs, etc. The body-builder has to get some of the ac lines and hoses custom fabricated, because of the various lenghts, bends, etc. of the particular layout.

My memory is very hazy on this but I vaguely remember seeing ads back in the late 60s or so for A/C units installed at Sears and so on for something like 130 dollars total or something like that. Back in the mid 60s dual piston disc brakes were a 12 dollar option on Corvettes and look how many people passed on that.

Some years ago I ran across an old copy of the local paper from 1965 which had an ad for the new VW Bugs. The ad stated…
The early VW had its problems. It was noisy. Shifting was tough. Visibility was none too good. The old VW made a racket. The new VW may not be perfect but its a good 15 years better than the first one.

When it comes to climate control the last of the Beetles weren’t much better than the first although at one point A/C became a shaky option. A leaky York compressor and a condenser mounted horizontally underneath the car pretty much guaranteed there were going to be issues.

Where did they find the room to mount a York compressor on a Beetle . . . Yorks are HUGE

We have several class 8 trucks in our fleet with Yorks. Commercial vehicles kept using them, long after cars and light trucks moved on to more modern systems

On the VW Beetles the York compressor was mounted on the left rear of the engine compartment. Needless to say it was packed in there and it made spark plug replacement on the 2 driver’s side spark plugs much more difficult. Even worse was when those spark plug holes had to be Heli-Coiled.

The worst part was the condenser underneath. They took a beating from road debris and electric fan failure. Not to mention condensers getting mangled from curb overruns, raccoons, and snow banks.

As I said, my memory is very hazy on the A/C price but I’m, reasonably certain it was something like 139 dollars at a Montgomery Wards auto center. It could be that I’m dead wrong due to the passage of time but that 139 number seemed to stick for some reason. Maybe that was the price of the kit alone sans labor. Labor rates in the 60 was likely in the 5 an hour range. Maybe…

I think that my father paid $300-something for an aftermarket A/C system in 1966.

On the VW Beetles the York compressor was mounted on the left rear of the engine compartment.

Given that York is huge and heavy . . . did that affect weight distribution and/or handling in a meaningful way?

The worst part was the condenser underneath.

How in the heck is an ac condenser supposed to work efficiently if it’s mounted underneath . . . ?!

There’s a former Wards just a few miles down the road. Wards has obviously been out of business for several years now. But that building still sits vacant. You can still make out “Wards” even though it’s now faded. I have no idea who owns the property, but it’s gated and padlocked. Maybe somebody is waiting for the land to dramatically go up in value . . . ? Could be, as I read the only thing of value as far as Sears is concerned is the land

Then my recollection must be faulty. My father was far too thrifty to have paid the equivalent of over $2k in 1966. ok4450’s recollection is probably more accurate.

I think the York compressors are different. The VW was not small but also not huge. It was crammed in there though and made things a bit of a pain to work around. That same compressor was also used on early Subarus.

The condenser was not very efficient. Two fans blew air straight down and oncoming air at speed went over the top of the car instead of through the condenser fins. As you can see by the following pic fin integrity was non-existent. Rocks, snow/ice, curbs, animals, potholes, etc all took a toll on the fins; and sometimes the condensers would get torn off all depending upon what was struck. Better than sweating… as long as it stayed in one piece. 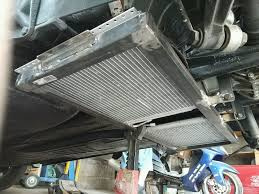 Still I saw no need, even if I would have known it was available. On a warm summer night I just opened up the sun roof and let the moon shine in. Just like a convertible. I drove it on the highway with the pedal to the floor and can’t imagine having an AC unit robbing the few horses I had.

My son has an 09 civic si. His ac was intermittent for a few months. Then it quit altogether. He replaced alot of parts without fixing it.
Evidently it’s electrical related. I suggested trying what we used to do to farm equipment. Run a wire to the compressor from the battery to a switch on the dash. Works every time. 220000 miles on the car so it’s the best option

I’ve known guys to start electrical fires in their vehicles, because they “rigged something up” . . .

I hear what your saying. So far (57 years) so good.
Folks might be surprised what keeps farm equipment running. Of course farms like I grew up on are giving way to large operations that lease new equipment every year.
I was once told to watch where I stepped in a grain truck. Floor was rusted out.

Folks might be surprised what keeps farm equipment running.

I’ve heard a few stories, concerning improvisation and thinking outside of the box

A retired machinist friend here works on farm equipment now and then and I don’t know how he puts up with it. Some globs of weld are as big as my fist where it’s been 20 years of weld over weld over weld over…
And anyone who thinks farmers are starving are wrong. On paper they’re broke by design.