So here’s the issue I’ve been having and I’m out of ideas, a quick summary is at the bottom:

I’ve had my car for 4 years. After about 2 years, I happened to be checking the coolant level and noticed it was pretty low, maybe one to two cups short of coolant. I filled it up not thinking much about it; maybe 3-4 weeks later I checked again and about the same amount was gone. I continued to check every few weeks and it seemed to be missing the same amount. I didn’t pay much mind to it because I never had any issues with overheating or anything else and I’d been driving like this awhile apparently.

Fast forward maybe another year and a half, I topped up the coolant again, but this time I noticed some steam coming out from under the hood near the radiator cap area. I figured that I filled it up a bit too high and the extra liquid was coming out and boiling up. Big mistake there apparently; a week later or so, while driving on the highway, I must have overheated and blew cracks in the radiator, fluid everywhere.

After that, I put in a brand new radiator. Then the next day driving, the check engine light came on with a thermostat code (P0128) and I noticed my heat was going high. Checked the thermostat, it was stuck open, so I replaced it. Two days or so later, the light still hadn’t gone off, and I was beginning to overheat again. Checked my coolant, missing like one to two cups of coolant again…

Basically I’ve found now that I ONLY lose coolant when driving. I’ve let the car idle for over 40 minutes while occasionally giving it some gas, I’ve checked my system with a coolant system pressure tester, both of which I see literally only a couple drops over 40 minutes to 2 hours. No where even close to the 2 cups of coolant disappearing in about 10 minutes of driving.

The leaking seems to be burst all over, not just from one specific spot. It’s also not leaking from the water pump side of the engine, and it’s not mixing with my oil or being burnt off that I can notice while driving, which makes me think it’s not a head gasket or water pump.

I’m just out of ideas now and don’t want to spend a fortune getting it checked and getting everything changed out if I don’t have to. Only thing I can think of is maybe it was a faulty new radiator? Any help would be appreciated.

A leaking head gasket or crack in the head or block are all possibilities. If there are bubbles bursting at the radiator cap opening while the engine is running, they could be exhaust gasses. A hydrocarbon sniffer tool can analyze those gasses. There are also chemical test strips that can detect HCs in the coolant. Good luck and please keep us informed.

Follow the advice of @shanonia. The over heating along with the pressure buildup are signs of a head gasket leak. Have a block check done on the engine.

Thanks for the reply guys! I have some new information. We did some more testing, put some paper towels in various areas under the hood to try to determine where it’s spewing from. It seems like the coolant overflow reservoir is filling up to its max and spilling out of the little overflow holes at the top. Not sure what is causing this; seems like the system is getting too hot and sending too much coolant into the overflow. It’s strange because the temperature reading on my dashboard isn’t showing too much heat, until enough coolant spills out. I’m going to try another new thermostat in case the new cheap one that I bought is faulty.

Does this still sound like the head gasket to you guys? Would it cause the overflow to be taking too much liquid?

This is what you need to buy

Use it and report the results back to us, please 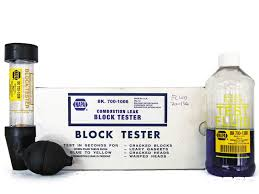 Any reputable auto parts store will have this in stock . . . it doesn’t cost and arm and a leg

the coolant overflow reservoir is filling up to its max and spilling out of the little overflow holes at the top.

That’s because the exhaust gasses aren’t all going out the tailpipe. Some are being pumped into the cooling system as the pistons go up and down. The pressure escapes by that route. Without the overflow system it would spew out the radiator cap.

From what you now say, there is no don’t doubt in my mind that you have a head gasket leak. With coolant blowing out of the reservoir that nails it in my book. I wouldn’t even purchase the block test kit as it would be a waste of money to confirm a problem that is already very obvious to the trained eye.

Sadly… I too will sound the Head Gasket Failure Alarm… as soon as I find the lever you pull to sound that alarm.

I too will sound the Head Gasket Failure Alarm

That’s the most likely and least expensive. A cracked head or block - far less likely - are bigger trouble.

Yep… and the gasket failure began way back when coolant was first being pushed out…it culminated in an overheat after the rad swap with too much air left over during the process.

Thats the story of how head gaskets fail…

Sadly, a cracked block was common on certain Civics, roughly model years 2006 - 2009 . . . it’s been awhile, but it was well established, and Honda had lots of official documentation