My neighbors 1968 dart with the slant six didn’t have one but needed one, so I added a micro switch on the throttle linkage at the carb. My own dart had a V8 and didn’t need one.

Let’s keep it simple and say our theoretical '05 Civic is putting out 45hp at 60mph.

If you like to drive 4-cylinder economy cars like I do, you will certainly notice the lack of performance when the A/C is running. Even on our 2004 Toyota Corolla, the difference is noticeable, especially when the road inclines upward.

Imagine the horsepower one of those old GM A6 compressors would eat up.

I remember replacing a few of those

Very heavy, and it was a bear if you had to deal with those spacers that went between the bracket, compressor and bolt. Getting everything lined up while holding that heavy beast, and then making sure the bolts started without cross-threading . . .

! remember removing York compressors from vehicles destined for the junk yard, and driving them with an electric motor and belt to make an air compressor. 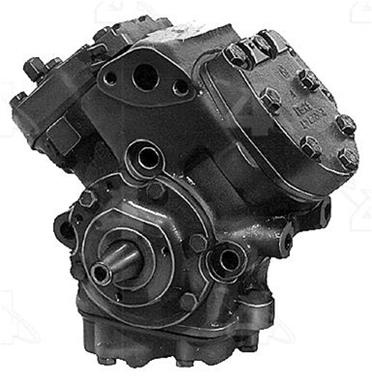 I saw a A/C compressor that looked just like that on a 1954 Imperial. The owner told me that it was the same one that Chrysler’s Air-Temp division had developed to cool railway passenger cars.

My first Air conditioned car was an 87 Plymouth Caravele. You really did not need A’C in Western NY until they stopped putting good ventilation in cars.

In my 20’s I drove old cars with large windows and cowl vents, good ventilation. In my thirties I decided that I didn’t want to sweat while waiting at traffic lights so I stopped driving the old cars and started driving modern cars with A/C. I am not disappointed that vehicle manufactures have improved A/C systems over the years rather than develop new ways of blowing dirt on me.

Nothing nicer than a 104 degrees in OK back in the day, no A/C, and vinyl seats…

I had a 59 Corvette back then and during the summer it was a 4 wheeled broiler. At night with the hardtop off it was fantastic and fun to drive. Any other time the occupants were gasping for air. The only air inlet was a lever operated cowl opening at the middle of the windshield and all that did was allow engine heat in.

How in the world 3 of us (6 foot, 6’1" and 6’2") males managed to make a 100 miles one way trip crammed in that car sardine mode with a case of beer to see a concert still baffles me. Youthful exuberance I guess…and the concert sucked beyond belief.

I’m glad you also lived beyond your youth.

I’m not out of my youth yet. Anytime someone mentions age I just say “You’re old. I’m 19 and gonna stay that way”. Power of positive thinking.

Back in the day of large displacement engines with enough torque to pull a tree stump out of the ground one would hardly notice when one of those oversized compressors would engage. Those compressors would freeze a side of beef.