My wife’s Matrix has about 150,000 miles. Sporadically when she tries to start it (hot or cold), the lights, etc. come on, but the starter doesn’t turn over. Usually, she just pulls the key, puts it back in and it works. Occasionally not, it will take several times to start. This week, it wouldn’t start and she told me to push it forward 5 feet. I did, and it started right up. Any ideas?

Battery connections are the first place to begin when you have a “No Crank” situation. Even
if you have a new battery, if the connections are loose, dirty or corroded, you will not be
allowing the full flow of current to pass thru the connections. The connection may be
enough to turn on the lights, but not enough for the huge flow that is needed to operate the
starter. This is where many people say that they know the battery is good….”because the
lights come on”. This is no more a battery test than licking a 9volt battery. It only tells you that there is electricity…not how many volts or the amperage that flows from the battery.
Jump starting may have wiggled the terminal just enough to allow the current to pass and start the engine, but tomorrow you have the same problem.

First remove the cables from the battery and use a wire brush to remove any corrosion and dirt from the battery posts and the cable terminals. There is a tool with a round wire brush for this purpose, found at any auto parts store for less than $10 http://shop.advanceautoparts.com/p/kd-tools-terminal-battery-brush-kdt201/25980576-P?searchTerm=terminal+brush.
Before connecting the cables, apply a coating of di-electric grease to the battery posts this will keep oxygen away from the connection so that it will not corrode as fast.

It is just as important that the other end of the cables also have a clean connection. Remove the negayive cable from the battery again so that you do not short anything out. Follow both cables to their far ends, remove this connection and wire brush the connection and the cable terminal clean and retighten these connections.

If there was work done recently, there may have been an “engine to body” ground that was not installed following the work. These grounds normally run from the rear of the engine to the firewall and are uninsulated and most are a braided wire. If any of these are found unattached…reattach them.
Remember….this is not a “Sherman Tank” don’t over tighten the connections.
Tight…tight………………too tight…broke!!!

Good ideas above. If you don’t want to take it to a shop for a proper diagnosis, but instead want to roll the dice on something that’s pretty likely to work, replacing both the battery and starter motor has a good chance of fixing the problem.

Starter solenoid failure is a common problem with this model (I have a 2006).
Keep a broomstick (or similar) in the back and show your wife how to tap the starter next time it happens.
If that makes it work then you know for sure it’s the solenoid.
Most shops will want to just replace the whole starter.

The next time the engine won’t start, with the dash lights on, step on the brake pedal and shift the transmission into neutral.

If the engine starts, the problem points to the park/neutral safety switch

Starter solenoid failure is a common problem with this model

Had this problem in my 99 Corolla, I replaced the old worned out copper contacts and plunger inside the solonoid housing and it worked perfectly after that. You can buy a Denso starter repair kits for $10 on ebay. You will save $$$$ from buying a reman unit. 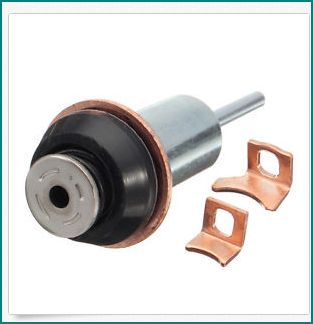 If the problem is traced to the starter motor, fyi , I had my local auto-electric shop do the job @corollaguy1 suggests above on my Corolla’s faulty starter/. The fee? A grand total of $10, parts and labor. Of course I had to remove the starter, take it to them, then re-install it. Fixed the problem straight away. ( Note: I don’t recommend starter motor removal/replacement for a beginner diy’er, at least not on cars with engine compartments configured like my Corolla.)

I don’t recommend starter motor removal/replacement for a beginner diy’er, at least not on cars with engine compartments configured like my Corolla.)

I had to remove the battery and the oil filter to take out the starter on my Corolla. Took 1 hour to do the job.

I replaced the old worned out copper contacts…

Sorry, can’t take it any more…it’s worn out…

(I’ve also replaced those contacts on a Camry…fixed it.)