last year i replaced a fuel injector in my 2003 ford escape XLT 2 wheel drive 6 cylinder. I replaced it because my check engine light came on and my ob2 reader said there was a misfire on cylinder #5. after reading everything i could find online about this issue i first followed everyone’s recommendation and replaced the boots and plugs on all 6 cylinders. it did not solve my issue. finally i dove in one day and simply replaced the injector and what do you know, the light went off and i passed smog… end of story.

jump ahead a year and i come across the plastic engine cover that i had apparently taken off when i worked on the car last year and simply left it on a shelf in the garage. i decide to screw it back on… i had some trouble attaching it for some reason and it didnt seem like it sat right. no big deal… i thought. Later that night i decided to go to a friends. Within 10 min i notice the dashboard lights seemed a little dimmer and felt the car was struggling just a little… i pull over put some gas in it, looked everything over and all seemed fine… Back on the road, things feel better so i jump on the freeway. Another 10 minutes later doin 70mph on the 405 in the fast lane, i started losing power…the abs light comes on… im frantically trying to get over 6 lanes. I barely make it and glide down an off ramp when the car completely dies and realize i have no brakes. As im rolling through a red light at the bottom of the off ramp, i try turning the wheel, which now has no power steering, just a little to the left so i could hopefully make the upcoming turn, tand the steering wheel locks. i wind up off the road in a bit of a ditch, but thank god, safe and sound. Could of been sooo much worse. The car wont start, headlights are fading into the darkness. i had the haz lights on but they wouldnt work and instead made a god awful whining noise. There i was, stranded down an embankment off the road in a dark, not well travelled very deserted road at 10pm. Then realize i cant call AAA cuz i had 1% juice left on my phone. Windows stuck in the down position its cold out, and of course it starts to pour…i was there for 4 hours before a AAA truck just by luck spots me off the side of the road. He looks under the hood, tests the battery, claims i have serious problems and tows me to a friends house. he unloads me off the flatbed, i get in the car and just out of curiosity tried to start it… and it starts right up. huh? He said i must of had a short and suggested getting home fast. i take off, make it maybe 2 miles and it dies in the middle of an intersection. I push it to the side of the road and leave it there overnight because you cant call AAA twice in a day. who knew? Next day i go back and bring with me a new battery as that one was 4 years old. Connected it and it Started right up… drove it maybe 10 miles and it died again. guess its the alternator… i do my research online everyone says its the worst job in the world to do… watched a bunch of vids… im ready to try doin it… i get under the car just to look at the alternator and try some tests on it, and i notice a wire harness running under the alternator. It looks like the wires leading to the pigtail that plugs into the alternator, the wire that bolts onto the post of the alternator and i think a wire coming from an O2 sensor are all encased in this harness. but it is charred, brittle and i see all these colored wires exposed… and in several places on the harness. Though i didnt see any actual copper wires exposed, it certainly desont look good. I disconnected one end the harness which i believe was into another O2 reader (it was a blue connector) and the other end looks like it comes up by the engine, probably to the boots but not sure if there is a connector it reaches before then. The car wont stay running long enough i think to get under the car to test the alternator not to mention i don’t think i have wires that long to go from the battery to the alternator. And im kinda doing this all on my own.

Anyway, it looks like a replacement harness is only like $25. Would breaks in that wire harness cause shorts and maybe thats why it has started right up sometimes and not others? Could the alternator still be bad even though it appears the wiring may be the issue? By the way, when i was stranded for those 4 hours… i took off the plastic engine cover because the car ran perfect for a year and the minute i put that on, this issue came up… so i thought maybe there was a short being created cuz of a bolt or something on the cover… but after removing it, nothing got better. Havent been able to find much info online about replacing wire harnesses but it does look tricky… can anyone give me some suggestions? Sorry for the long winded post… 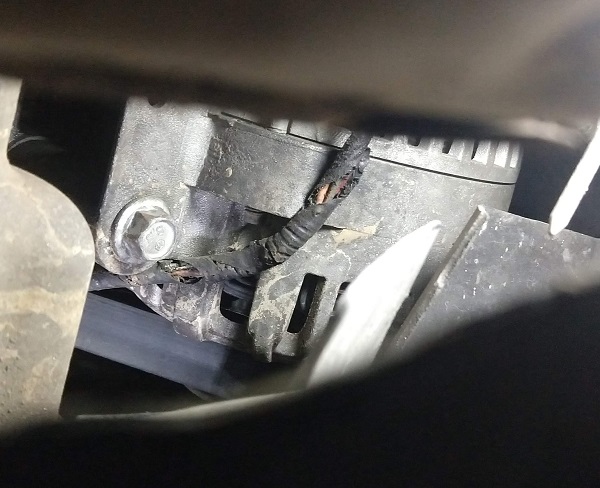 sorry, im not sure where it was duplicated,i can only see this one… in any event, Im on my way to my buddies to further investigate. I too feel its a wiring issue solely because just hours before i tried attaching that plastic engine protector cover and had difficulties doing it… also, though the car is a 2003, there is only 85,000 miles on it. seems a little premature for it to go out.

Anyway 2 quick things… i went over last night just for a few minutes and took the battery out as well as the cradle so i could follow the positive and negative wires and make sure they were clean and all the connections on that battery harness went somewhere and everything was tightly attached. So, the connectors that attached to the battery posts looked clean and fine. i then followed one of the wires to the fuse box and that was a tight clean fit. Then it appears the harness goes down behind the manifold… i then got under the car to see where it went, and i found some sort of hard housing made of plastic where it appears the wires gone in maybe to protect them from melting? is there some sort of plastic harness that is bolted to the back of the manifold that the wires are encased in? Because mine was broken off where it was bolted to to the manifold and just dangling. could this be the issue? ive attached a picture…do i need to fix that? and if so whats it called? lol

thanks again for your help 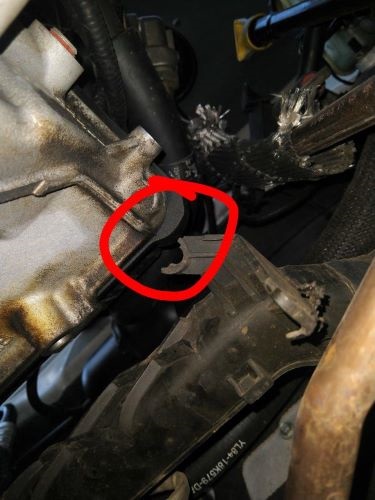 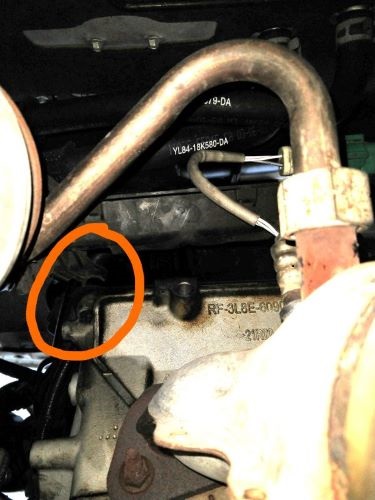 It sounds like you were having a bad day there. It never rains but it pours …

I don’t know what the problem is, and don’t know if the problems you show in the photo are involved, but it definitely seems like there’s either an intermittent short or intermittent-open circuit in the main power system. Shorts can be caused by A pinched wiring harness that gets pinched when you turn a corner or go over a bump, for example the engine or transmission shifts a little in their mounts. Opens can be caused by the same thing. The cause can prove to be quite elusive to find and due to something very unlikely happening.

To figure this out is probably going to require some expertise with tracing voltages between the alternator and battery and perhaps to the main power distribution connectors. To do that will require you have the wiring schematics, know how to use them, and a volt/ohm/amps meter. Are you set up on that front? If not, suggest to seek help with a shop that works on Fords, or perhaps an auto-electric shop.

You need to check the wires that got damaged. See if the damage to those wires goes beyond what is seen in the first picture. The trouble might have been simply caused by the wire being too close to the alternator. When the alternator is working hard it can get very hot to the touch, and I am thinking that the harness was touching the hot alternator case and that melted the plastic and tape protecting the wires. If that is the case you could try just splicing in a new section to replace the area that got damaged. Check the alternator fuse to see if it is blown. If it is, the alternator won’t work. If the damage to the wires goes beyond the area shown in the picture then you are going to have to replace the whole wiring for that circuit.