I have a 2002 GMC sierra 1500, V6 4.3L. I am having an issue with the RPMs slightly fluctuating when accelerating. It does not seem to do it all the time. Or eventually it will go away for a while and come back when driving for a while.

The RPMs generally only jump up an down less than 100 RPM or so (it moves very little). You can actually feel the trucks RPM changing so not a gauge issue.

I don’t think it fluctuates when idle (at least I don’t see it), mostly just during acceleration, when speeding up its hard to notice, its usually when you are driving steady. I tend to mostly see it in 3rd gear, but I believe it does it in every gear, just not as noticeable. Transmission also seems to shift fine.

There are is no check engine light, and no codes.

Recently had a tuneup done, new plugs and wires, so no misfiring. Replaced both catalytic converters.

I will be installing a new fuel filter soon, so may see if that does anything.

Things I suspect may be issue:

Any ideas what could be wrong?

Absolutely nothing is probably wrong. Don’t go looking to fix what isn’t broken. A slight (100 rpm) fluctuation could simply be normal engagement/disengagement of the a/c clutch.

Does it only do it when the ac is on?

If it was the A/C clutch; wouldn’t it do it just when the a/c is on? Mine fluctuates regardless of a/c being on or off, and it revs up and down continuously for almost the entire drive. Sometimes it doesn’t do it at all.

It does it regardless whether a/c is on or not. You can literally feel the truck hestitate or rev up and down when driving

Have the fuel pressure tested.

This means there’s a component under the intake manifold called the spider assembly. 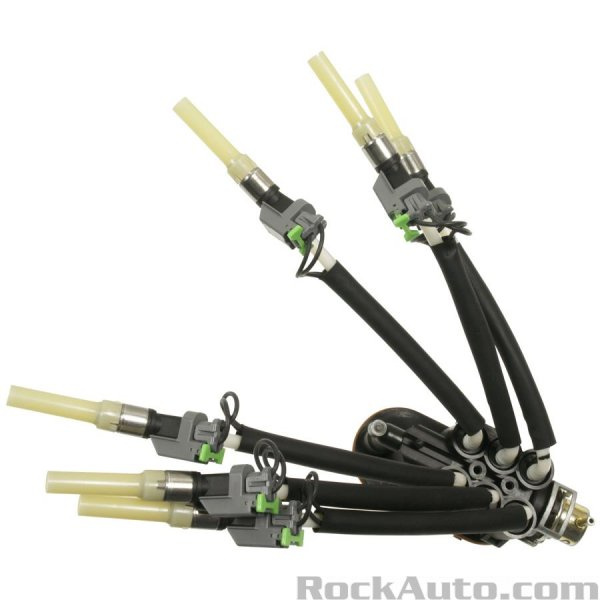 The spider assembly relies on the fuel pressure to blow open the poppet valves at the injectors.

What you are describing sounds like “surging”. There is any number of causes. A mechanic will have to go through a diagnostic procedure. Following is the procedure from the service manual (click to blow up).

I once experienced surging in a 1994 Chevy S10 at steady speed on the highway. The problem turned out to be a partly fouled spark plug. Probably not the problem here since the plugs have been replaced.

I have already replaced spider injector, maybe will try some injector cleaner or something. I am also going to be installing a fuel filter in a few days to see if that helps.

Yea, I recently just replaced them, maybe a few months ago with ACdelco plugs/wires. Might still check to see if they are arcing or something sometimes.

Not sure if it is related, but the fuel gauge isn’t accurate sometimes. I’ll drive and all of a sudden it drops a little and raises back up. It doesn’t do it all the time either. It doesn’t seem to do it when the RPM fluctuates.

Check the electrical connector at the fuel pump module for corrosion. Poor connections could cause intermittent issues with the fuel level sender and/or the fuel pump/fuel pressure.

I had similar, maybe not so pronounced, symptoms on my Chrysler minivan. Was also losing coolant slowly. Did a pressure test on the cooling system and found a leaking intake manifold gasket. Fixed that and the engine runs smoothly again.