I’m looking into buying a 2002 cr-v and noticed quite a bit of what I believe is considered “surface rust” under the hood. The car lived in Chicago until last year. Now it’s in San Francisco Bay Area. It costs $2500, and the price is right, but is this something that should deter me from buying the car? 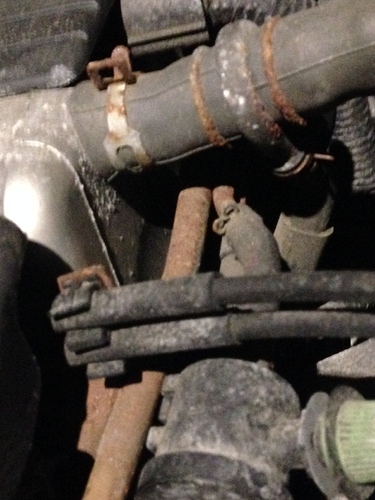 Most of us here feel that taking a used car for a pre-purchase inspection is money well spent. A good mechanic should be able to tell you if this is a serious issue or not.

Hi,
Since this Cr-V has lived so long in Chicago, and I belive thats in the snow belt where theres lots of salt on the roads for de-iceing( mind you I wouldnt know as Iam in North Eastern NB Canada and theres lots of salt used here) I would see if the owner woild let me take this car to my local garage for an inspection for salt corosion, but if the owner wouldn`t let me do that I would say see ya, and actually I would also get them to do an E test to see if the cat converter was working etc as this gets very expensive fast, good luck miramichier

That rust you see is the result of the zinc coatings put on those parts to sacrifice itself to prevent those parts from rusting away. The zinc is all used up and rust has appeared. If you can SEE rust on these minor engine compartment parts, there is rust on the 16 year old car that you can’t see. Especially if its lived its life in Chicago. You live in San Francisco, the home of rust free older cars. Exploit that. Buy an older nearly rust free car.

Rust never sleeps, and it is very expensive to repair. Pass on this.

Yeah, @Mustangman is right. If you lived in Chicago then this rust would be of no concern because every 2002 car in Chicago is going to have rust if it wasn’t put away for the winters.

But a car with any visible rust anywhere in a rust-free location is worth pretty much bupkus. Pass.

I’m in ?Wisconsin…west of Milwaukee and can tell you that this looks normal for a car from this area.
There are some that seem to get less salt spray under the hood though.

I’d pass on the car and look for something …not from the “rust belt”.

My 1999 Civic has lived in WI and MN since new. The underhood rust you show looks familiar but not scary to me. The one serious rust issue I have had so far was that a rear brake line rusted through: the brake lines and fuel lines and wiring go from the firewall to the back of the vehicle with a perforated black plastic shield protecting them from debris. But over time, grit and snow and salt accumulated there and created a rust-supporting environment. I had both rear brake lines replaced for a few hundred dollars - the only expensive repair except for accident damage.

Thanks so much everyone for confirming my gut feeling! I’m going to pass on it.

Good call. I’m in the SF Bay area, one of my cars is a 25 year old Corolla. It’s been driven in the Bay Area since day 1. Hardly any rust. I’ve never had to replace any part b/c it was rusted. I have a 45 year old truck too, which started out in Colorado. So it has lots of rust. In fact if I hadn’t removed it from road-salt plagued Colorado to the SF Bay Area at around the 10 year mark, it would have been put into the crusher years ago. Instead, I drove that truck today