I am looking into buying a used van. In this market its hard to find anything in my budget ($3000) thats not a rusted out bucket with a million miles on it. Anyway, I found a 2000 GMC Safari with a vortec 4.3 motor. I am pretty okay with cars but mostly import not american and certianly not a van or truck.

I took a look at it today and it starts and runs well. I drove it and it seemed fine. I was told it needs front tires as its rwd. No big deal there. Oil was fresh and didnt smell as if coolant was in it. But heres my 2 concerns. Firstly the cooland in the resevoir was brown. He had mentioned he thought the radiator was replaced a couple years ago. Didnt look like it to me, so then i pulled off the rad cap and saw really brown almost like rusty gritty coolant. I know technically dex-cool is orange but it didnt look right. I texted a mechanic friend and he said it just needs a flush. But when i called a place i get work done they said if someone put green coolant it could have clogged the water jackets in the block. Im not looking to get into a money pit.

I also am going to post some photos below of an oil leak that i saw by the pan as well as some suspension parts. Please let me know if its worth my time.

Most of the vans in my area are $5000 with over 200k miles since this is lower mileage at 135k and hes asking $3000, thats why im interested. He didnt seem like he knew a ton about cars so he had his mechanic print out the records from 2017 to now and it looks as though the radiator hoses were replaced and a coolant flush was preformed. sorry its a long post i just want to be thorough. 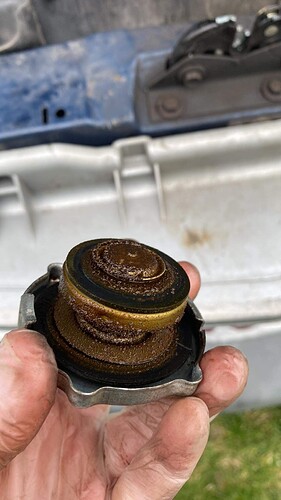 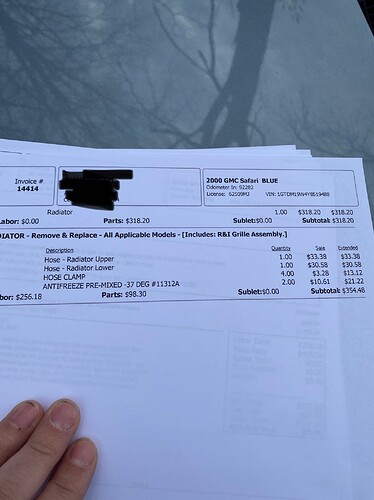 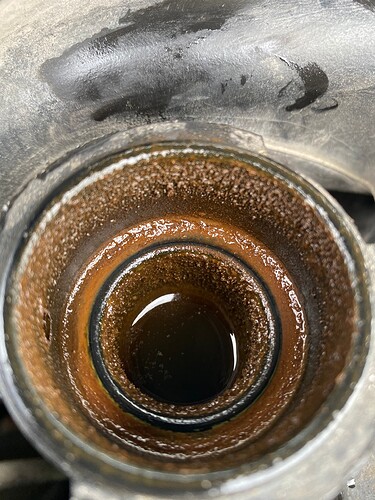 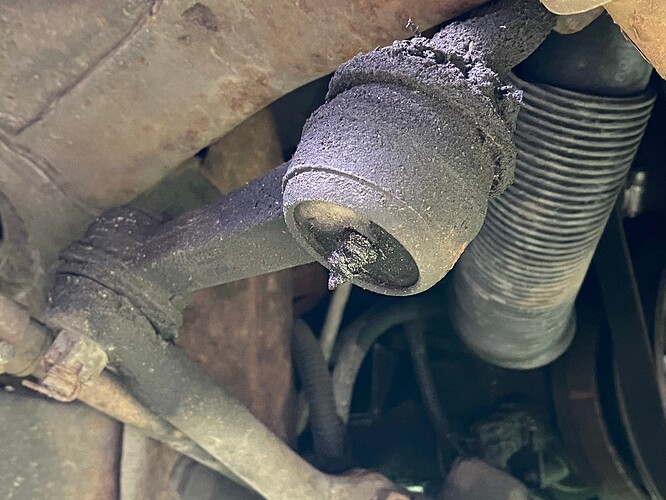 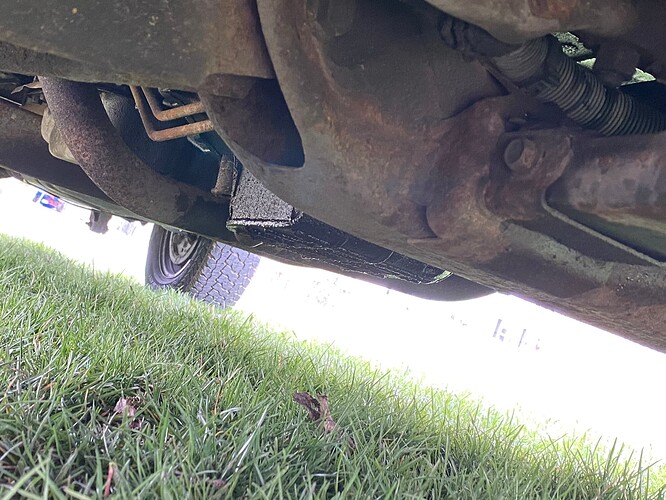 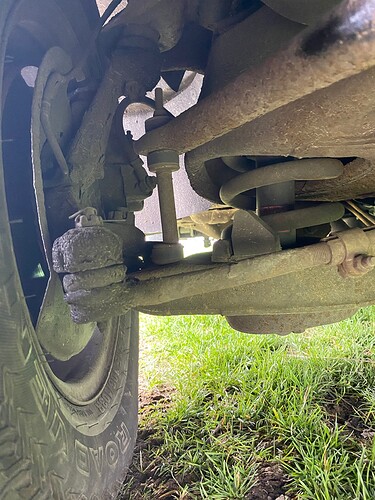 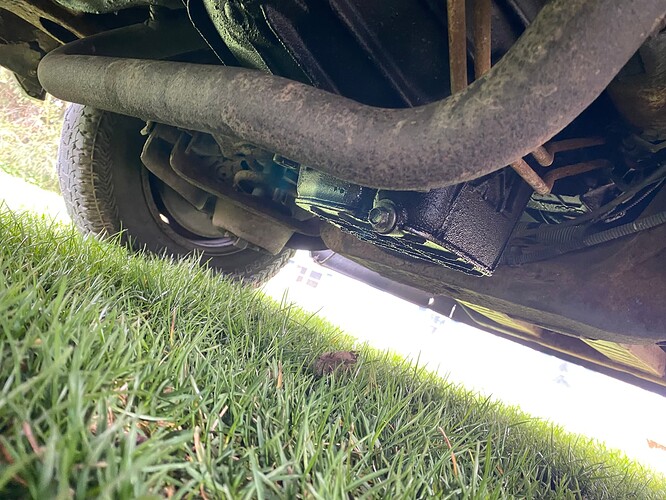 Looks like a lot of “Stop Leak” in there, I’d avoid buying it just on that.

is that what the gritty texture is? Ive seen that stuff in the store but never in a vehicle.

Could be dexcool sludge, not fun, too many what ifs. Any overheating? https://grassrootsmotorsports.com/forum/grm/good-flush-products-for-dexcool-sludge/141875/page1/

was thinking the same thing. I didnt let it run for long enough to be honest. So im not sure if it overheats. I just knew that was my top concern before i went further. Just not alot of vehicles in my area that are available.

Another vote to pass on this vehicle . Also if it needs front tires and you only buy 2 tires they should go on the rear and the rear tires moved to the front .

Yeah, the coolant is kind of concerning. The oil leak…hard to say. If it’s been leaking for years and never cleaned up, it might not be bad. I mean for $3k, you’re not going to get perfection.

Here’s what I’d do. Take a long test drive. Like 30 minutes. Make sure the heater works well so you’ll know the heater core isn’t clogged. Watch the temp gauge. If it doesn’t overheat and the heat works, the cooling system is probably not too plugged. Park it on a concrete parking lot or driveway near the end of the drive and see if it drips any oil. If everything checks out on the test drive, it might be an ok vehicle. But, I’d definitely want to flush the cooling system if I did wind up buying it.

Bear in mind, if you buy a 20 plus year old vehicle, you will have to do some work on it, even if it doesn’t have major issues.

Ask your own mechanic do a pre-purchase inspection before signing anything. The cooling system situation looks troubling to me. But it could well be ok. You need an experienced mechanic who’s on your side with the vehicle in their shop for an expert opinion.

You’ll pay for the inspection, but the way it usually turns out your mechanic will find a problem or two and the seller will have to fix them as part of the sale. So the net result, the inspection probably won’t cost you much if you decide to buy the car.

This is a 3000.00 vehicle. I doubt if the seller will let them take the thing to a shop for inspection . I also doubt they will fix anything even if they do let it be inspected . I am surprised they allowed all those pictures .

I doubt if the seller will let them take the thing to a shop for inspection . I also doubt they will fix anything even if they do let it be inspected .

Definitely possible. It’s the seller’s car after all. Nevada casino’s won’t let you take their slot machines to your own slot machine mechanic for assessment either. It’s a gamble.

We have a ton of these in our fleet, and I don’t see anything terrible in the pictures

It simply looks like the coolant wasn’t serviced frequently.

The Astro and Safari were quite forgiving of abuse and neglect, imo

And from a maintenance perspective, they’re not particularly difficult to work on.

This is a 3000.00 vehicle. I doubt if the seller will let them take the thing to a shop for inspection

On the other hand, it’s a $3k vehicle. I don’t care as much where a potential buyer takes it! I sold a Jeep for $4500 and let the guy drive it 3 times, one of which he took it to a shop and put it on a lift. He noticed the front driveshaft was bent, but I declined to help with that on the price (assuming it was really bent, I never noticed). Someone else came along later that day and paid cash on the spot. The original guy was actually upset that I “sold it out from under him”!

I also once had a lady threaten to call the cops because I asked (over the phone) if I could take a 2014 f150 to my shop and check it out. Sheesh! A simple “no” would’ve sufficed. I had driven it earlier in the week with her and her husband. I liked it, but I wanted to check it out a bit more before dropping 28 grand.

Every one of these images are a result of Deathcool damage.

I once bought a handicap van, Chevy G20, that was at least as neglected as this one. It was neglected because that last half dozen owners only kept it for 2 years or less because the person they bought it for died. Same in my case, but I did drain and refill the coolant, the old came out like mud, I did not flush. Did a long over due oil change and transmission ATF drain and fill. I also replaced the shock absorbers. Got about two years out of it then sold it. Never broke down or over heated.