Just bought a 1997 Toyota Camry with 110k original miles on it. It was driven as a daily driver short distances, just never taken long distances hence the low mileage for the year. My question is, should I bother flushing all the fluids, especially the transmission fluid and all? The owner was a mechanic and he said that he would not because it is possible that when they flush it, they might not get all of it out, and then the old fluid will be mixed in with the new. His suggestion was to leave it and use the philosophy “if it aint broke, dont fix it”.

I was just curious of other’s opinion on this. Should I change all the fluids or just leave it alone and just do regular oil changes etc until it starts giving me issues, if any.

Change the engine oil and the transmission fluid. A small amount of old trans fluid is no problem. Check the condition of the coolant. If it is acidic, change it.

I would, at minimum, drain the transmission pan (most Toyota’s have a transmission drain plug - not certain about a 97 Camry) and refill. That will be half the fluid or so. If you want more fresh fluid in the trans, you can do it again in 30k miles, or whatever. A full exchange at a shop isn’t going to hurt anything, either.

I agree with JT on the coolant also.

I’d have no worries with a shop exchanging the fluid completely on the trans or coolant system if you wanted to do that. I wouldn’t really want a “flush” where they add cleaning chemicals. Just a fluid exchange.

Apparently you bought this instead of the Town Car . What kept you from buying it ?

Yea the towncar had a lot of issues. This I didnt see much wrong with it so now I just have to hope for the best.

OK, so I should change all the fluids and filters even though they are probably ok?

just do regular oil changes etc until it starts giving me issues, if any.

If you wait for issues, you are defeating the purpose of regular maintenance.

OK, so I should change all the fluids and filters even though they are probably ok?

Have the fluids been changed or not? Coolant for example should be changed every 5 years.

I know for a fact the transmission fluid has not. I do not know about the others

I will just go get them all done tomorrow, hope it wont be too much $

Just one of the costs of buying a used car. Unless you have proof a item was done assume it wasn’t.

the old fluid will be mixed in with the new … use the philosophy “if it aint broke, dont fix it”

Certainly the easiest approach to routine fluid changes, but I don’t think there’s much evidence supporting that theory. Unless you know otherwise, best bet is to assume all fluid change-outs are past their due date, and schedule all that work done in the near future. As long as the oil and trans fluid are clear, no burned odor, and at the right level, suggest replacing the coolant is the first priority.

I’m a driveway diy’er, and I don’t replace brake or clutch fluid on any schedule; only replace those when other needed work forces me to open the hydraulic systems. Likewise I don’t replace manual transmission or differential gear oils unless there’s a reason, not by a schedule. Not everyone here concurs w/that approach.

BTW, it is definitely possible that soon after replacing the coolant the water pump will spring a leak; but the cause wouldn’t be the effects of the coolant change. Caused either b/c the water pump had reached its wear limit, and/or b/c the coolant hadn’t been changed on the manufacturer’s recommended schedule. Coolant acidifies as it reacts to the metal surfaces inside the engine. That occurs over time, whether the car is used, or not.

hmmm … 110k miles in 25 years, looks to be 4.4k miles per year … pretty good chance your car will have some adverse effects from that little use. Ask you shop if anything related to decades of low miles per year needs to be checked. They might recommend checking the EGR, PCV systems, remove valve covers to inspect the valve area for sludge, is the exhaust system rusting & carbon build up, etc.

I would get the transmission changed at the Toyota dealer. I would not go to a quick lube place that will use Dexron plus an additive package to make it Toyota compatible.

Well I think he was talking about how he had customers come to change their transmission fluid even thought it ran fine and then after changing it, the car had transmission issues with shifting etc. That is my main concern is if yall had issues after changing fluids on a car that may not have needed it. It would suck if I added all new fluids then it drove poorly and developed more problems.

That happens when there already was a problem about to pop up or when the wrong fluid was used. I agree to have the exact Toyota fluid used.

If a transmission fails right after a fluid change (with the correct amount of the proper fluid), it was about to fail anyway.

issues after changing fluids on a car that may not have needed it.

25-year-old transmission fluid does not need to be changed?

The transmission fluid may have been changed before, how do you know it hasn’t? Is the fluid black?

I would get the transmission changed at the Toyota dealer. I would not go to a quick lube place that will use Dexron plus an additive package to make it Toyota compatible.

I wouldn’t go to a quick lube type place either, but with this car the Dexron III would not be the issue, Dexron III is acceptable. It would be the competency of the staff that I would question. This page is from the owners manual. @Dbrea26 if this used car didn’t have the manual with it, you can get one free at: www.givemethedamnmanual.com 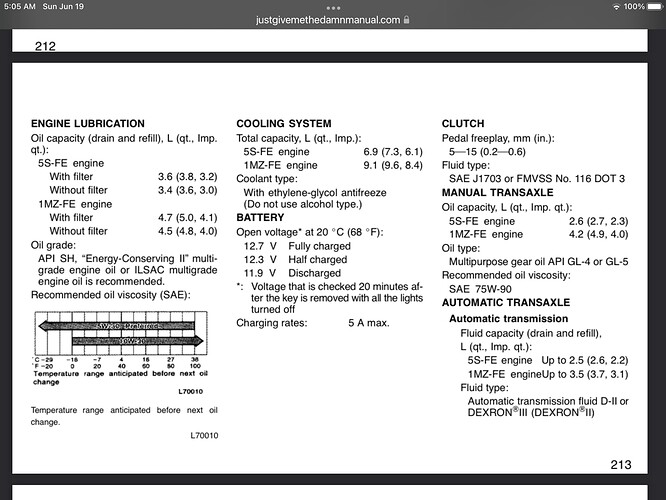 Thanks for the info, I did not know that earlier Toyotas used non Toyota specefic automatic transmission fluid.

The 1997-2001 Toyota Camry is one of the best quality, most reliable models I know of. In fact, I can think of no other vehicle which offers as much bang for the buck.

Now that you have this excellent car, I would do my best to take good care of it, so it will last for many more years. I would definitely change the transmission fluid and filter. I would also drain and refill the coolant, however if you are planning to change the timing belt (not a bad idea), the coolant will be changed then. Fortunately, both engines used in this car are non-interference, so if funds are short, you can hold off on that for now.

I would change the transmission fluid. Take the pan off and let it drain. Jack it up on the engine side so more fluid comes out. Then clean out all the sediment off the bottom of the pan and clean the magnets and then put the magnets back in the same spots. Take the 3 bolts out to take the filter screen out and spray it clean with brake cleaner. Don’t use a non Toyota screen as the mesh is a lot bigger than the proper Toyota filter. The seal on the pan shouldn’t tear, so it can be reused. Buy the blue bottle of Valvoline dexron III which is $15 at Menards. Some shops will try to use a thinner universal fluid which is not approved for use in Toyota transmissions and could cause premature wear to the transmission. Watch out for that. Problems after fluid changes usually have to do with an incorrect thinner fluid being used. Change the fluid every 20k miles of city driving or 40k miles of highway driving. I find it tricky to read the dip stick. I have to wait a half an hour after filling it for the fluid to settle down to be able to get an accurate reading. It must be checked while running.

Flushing the brake fluid may be a good idea if it’s never been done. If you replace the brake hoses, don’t get cheap ones from Autozone because the brakes will become spongy.

The radiators on these cars do crack, so keep an eye out for that.

If you have the timing and water pump changed, don’t use a Gates water pump. They are known to to start leaking and fail at 50k miles. Fortunately it’s a non interference engine so a broken timing belt doesn’t do any damage.

There is no metal bumper under the plastic bumper cover on the front corners of the car. The metal bumper ends about 20 cm from the edges. So be careful to not let it get hit on the corners. I’m considering taking the bumper cover off on mine and welding extensions on so I have a full width bumper. Go to any parking lot and you’ll probably see some car that was hit at 3 MPH on the corner and the whole corner is smashed in.

According to the IIHS the 1997 Camry has the lowest fatality rate of all full size cars for that period, right next to the Volvo 850. The NHTSA list on load limiters says that the seat belt load limiters weren’t added until 1998. I wish I could take it apart and see if the seat belts are different.

I think the 92-96 XV10 is even better. But the 97-01 XV20 uses the same engine and transmission so they both can go for a very long time. The interior build quality is a bit cheaper on the XV20. Something things were better on the XV10 like more solid interior door panels, the hood would stay up automatically. a fuel pump connector on the diagnostic connector, a loop fuel system, and the heater control valve is accessible in the engine compartment. I like the powerful 1st generation airbags that can hold up to a full size unrestrained crash dummy at 35 MPH without bottoming out!