1994 Villager hesitation and occasionally dies from a stop

I’ve got a 1994 Mercury Villager with 360,000+ miles on the clock. My current issue is that it will stumble a little bit from a stop pretty much every time, but I can live with that. My real issue is that after coming to a stop after 15+ minutes on the highway (such as a toll booth stop), it will idle perfectly fine while I’m taking the ticket. Then, once I start accelerating, it will die. This only happens about once every month or so. Normally, it’s just a bit of a hesitation. Once the engine dies, there is absolutely no hope of restarting the engine right away and it sounds like it’s cranking super rich when I turn it over. After I let it sit for 2-3 minutes on the side of the road, it’ll fire right up and carry on like nothing ever happened. In stop-and-go city driving, it’s a very predictable hesitation but never dies. It only dies when taking off from a stop after an extended run on the highway.

Passing power is fine and it never dies or stumbles anywhere other than just starting from a stop. It’s running on all 6, but it does vibrate just a little at idle. My pants sense it’s more like something being out of balance than a misfire. It’s got pretty new plugs/wires and I run a bottle of seafoam through it every couple months.

The check engine light is not on and it’s to old to have an OBDII plug so I can’t stream data. My EGR valve is holding fine when I manually put a vacuum on it and I don’t see any obvious vacuum leaks, but in all fairness, I haven’t done a thorough leak inspection/test. I did an experiment and disconnected my EGR vacuum line completely and it didn’t seem to make any difference other than triggering the CEL and the 1-2 shift seemed noticeably smoother (the 1-2 shift has been rather harsh for years). Go figure…

I’ve done more to it than I probably should have. The crank broke off on the external face of the front of the block. It was held in place by the harmonic balance bolt and the timing difference just caused the engine to die so no damage other than that (non interference). This was a design flaw and they increased the shaft size by 2mm the following year. I replaced the crank, bearings, head gasket, and did a minor overhaul while I was at it somewhere in the 200k neighborhood just for giggles. It doesn’t burn any oil, but it does drip a little bit from the rear main seal. Since it’s FWD and a pain to get to, I don’t bother fixing it and just add a splash of oil every now and then. What surprises me most is the exhaust system is all original and as quiet as the day it drove off the lot.

I was thinking about the Mass airflow sensor but no trouble codes are showing. Try unplugging the MAS and see how it runs. It just might need some cleaning with MAS cleaner or replace with a new one for cheap.

Just because the Check Engine light isn’t on, doesn’t mean there are no codes stored.

Here’s how to pull the codes from your OBDI Mercury.

Those codes don’t match my vehicle, but I have checked them several times before. The only ones I’ve seen are “fuel injector circuit fault” and “EGR system fault”. Super unspecific.

I am curious what the fuel injector circuit fault thing may be about and if it’s the cause of my idle vibrations, but it’s running on all 6. When I stick a scope on each injector, none of them sound different. The all measure within the ohm tolerance too.

What do you expect?

You know what I would try on a vehicle with that many miles?

Dump a bottle of Seafoam into the gas tank at the next refuel.

How to add Sea Foam Motor Treatment to Gasoline, Ethanol, and Diesel Fuels

I already do as mentioned in my original post.

Seems like an EGR malfunction could cause your symptoms.

I generally agree. But what? I already mentioned my EGR valve holds vacuum just fine, but I suspect it may be EGR related as well - I just don’t know what. In all fairness, I’m not terribly knowledgeable on EGR stuff, so EGR pro tips are certainly welcome.

(edit)
This picture was taken with a potato, but this is my EGR system according to my underwear manual (Haynes manual). 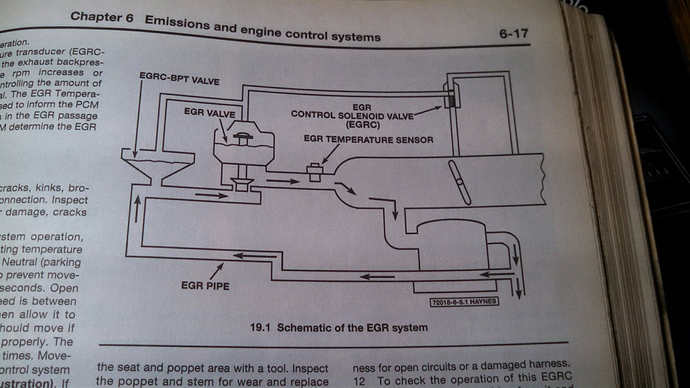 Any EGR pro tips other than checking for vacuum leaks?

To test the EGR valve for proper operation, get the engine up to operating temperature and shut the engine off.

Disconnect the vacuum hose from the EGR valve and plug it.

Connect a vacuum pump to the EGR valve.

Take something like a large socket and clamp it to the tail pipe to partially restrict the exhaust.

Start the engine, and while the engine is idling apply a vacuum to the EGR valve.

If the engine stumbles or stalls when doing this, the EGR valve is working properly.

Yeah, it stumbles quite badly when I stick a vacuum on it at idle. As previously mentioned my EGR valve holds a vacuum quite well, so I’m confident the valve is working properly. I’m not confident everything else is working properly, but I’m not sure how to pinpoint it. I think I need to get me a nice cigar and do a proper check for leaks.

If the engine still hesitates/dies from a stop, the problem’s not with the EGR circuit.

I did an experiment and disconnected my EGR vacuum line completely and it didn’t seem to make any difference other than triggering the CEL and the 1-2 shift seemed noticeably smoother (the 1-2 shift has been rather harsh for years). Go figure…

I spent an hour or so fiddling with it and noticed my vacuum and fuel regulator vacuum hose seemed to be switched with the EGR in front of the throttle body and the fuel regulator vacuum behind the throttle body, so I switched those back straight. I also checked my EGR control solenoid is working fine via cigar smoke. I just replaced all of the lines, so no cracked hoses. I also squirted out my MAF sensor real good. It runs better but still stumbles a bit.

I’m just not understanding what the difference of sitting 3 minutes makes in this situation. Obviously, something is changing in that 3 minute time period, but I can’t figure out what it would be…??? It generally seems worse when it gets hot, but I figured the engine would heat soak a lot more after 3 minutes of not moving than it would be after a 30 second pause at a stop after highway speeds. I may break out the multimeter and test my egr temp sensor after it cools down some more. Come to think of it, I believe this motor has one temp sensor for the dash and another one for the computer. Temps are fine and I don’t see how it would fluctuate that much, but it’s worth a shot.

I may have just got it figured out. In regards to my coolant temp sensor, my manual says: “With the engine warm (167 degrees F) resistance should be 179 to 219 ohms. When the engine is hot (212 degrees F), the resistance should drop to 60 to 72 ohms.” My engine has been sitting for a little while, so I took my temp gun out and it measures the coolant lines at 160 where the sensor is. I checked the ohms and we’re at 380.

That kinda makes sense when I think about it, honestly. If the resistance is high, the computer thinks it’s colder than it actually is so it dumps in a bit more fuel to compensate because it thinks the engine is cold. That would explain it feeling rich when I try to start it. If I squint my eyes and tilt my head sideways, I can kinda see how that would trigger a fuel injector circuit fault code too on an OBDI system.

I haven’t “proven” that that’s the culprit, but it’s out of spec, so I’m just gonna order me a new one anyways. Here’s hoping that’s all there is to it!

sounds like it’s cranking super rich when I turn it over.

feeling rich when I try to start it.

What does this mean?

Cars use a specific gas to air ratio in order to burn their fuel properly. The normal fuel ratio is about 14.7 parts air to 1 part fuel. This ratio changes slightly based on a few variables, including temperature, which is why you have to use a choke to start older cars/motorcycles with carburetors.

Um, yes, but I was asking what it means for an engine to Sound or Feel rich when cranking. I’ve never heard or felt such a thing I guess.

I gotcha. I may not do a very good job at explaining, but I’ll give it a shot. It feels like the engine is cranking over just a little bit harder than it normally does. It also seems to crank harder yet when I stomp on the gas pedal. My throttle body is on a cable, so it’s actually opening up the throttle body when I stomp on the pedal. I can also smell a bit more gas than normal when I stick my nose in the tail pipe.

A lean engine cranks over faster and can pop, sputter, and backfire.