1969 Volkswagen Beetle Will Not Idle

I have a mystery on my hands and am at a complete loss. I have a 1969 Volkswagen Beetle that will not hold an idle. It will start up just fine and as long as you have your foot on the gas, it will stay alive. As soon as you let off the car sputters and dies. Another symptom is that the is a miss in the engine, not sure if the two are related or need to time it and then check on the idle. Here is what I have done in an attempt to fix the issue:

I have been able to adjust the idle to get it to stay alive for about 30 seconds longer, but no matter ho much I adjust it still struggles and dies. Idles very rough no matter what.

Some have suggested a vacuum leak, and i know i have to put some sort of solution on the vacuum connections, but since I am relatively new to the world of VW beetles I am not quite sure where those are and what to put on and what to do if there is a leak.

If that’s not it then I have no clue whats wrong with it and I hope someone out there might have a solution!

First thing I would do is take the carb off, take it apart, and clean it (the innards) thoroughly. The float bowl is probably full of gunk. Make sure all the jets and passages are clear. Check the float for pinholes. Reassemble and reinstall with a new gasket between carb and engine block.

This is a simple job as long as you’re careful, and a good way to learn more about how your engine works. But if you don’t want to do it, find an old experienced VW mechanic who will do it for you.

There are two idle adjustments, an idles speed adjustment and an idle air/fuel mixture adjustment. Which one are you adjusting?

The miss could be the cause of the rough idle, as you are only working with 4 cylinders and one piston not firing would result in what you describe as “very rough idle no matter what”. These motors are pretty simple. Gas-spark-air. You’ve done a few things to eliminate the spark issue, but I would change the dist. cap, rotor and wires. Get someone to check your points and condenser installation. That should eliminate any spark issues. The vacuum leak suggestion is a good one. On a car this old, why not simply replace all of the vacuum hoses so you are done with that? So far as the gas part . . single or dual carb? Posty back when you can, I’m sure you’ll get a lot of good suggestions here, good folks post to this site. Rocketman

When you had the spark plugs out, did you do a compression check? Beetles are known to burn valves. Also did you check the valve clearances? If a pair (Intake and Exhaust) were excessive check the tightness of the head nuts. You might have a stud that has pulled out of the case. Check the tightness of the manifold to head nuts. That is where I would look for a vacuum leak that is not related to the carburator or its base gasket. Also check the manifold vacuum to verify if you have a vacuum leak.

When compression is good and even, the Beetle engine will idle down to a 200-100 RPM level where you can count the cylinder pulses.

I forgot to mention that I did take out the float and checked for holes and it came out clean. I still would like to take it apart to clean it, if for nothing else, like you said jesmed, to learn about the way it works.

And I was tinkering with both adjustments slightly, but most the mixture adjustment was where i was getting the best results.

I’m afraid to replace much else because I’ve replaced so much and got so hopeful when I turned that key and then so let down! But that is a good idea, I didn’t consider replacing the hoses.
This is a single carburetor solex H30/31 PICT

I haven’t touched the valves at all, I’m a little hesitant to do so and am not quite sure how I’d go about it. Don’t know why I am willing to do everything else, but am so scared of the valves!

Get yourself a good repair manual and go to town. This is the perfect engine to learn on, even if you make mistakes it’s easily repaired. Hard to mess up if you just follow the instructions for checking valve clearances, etc.

You MUST buy this: 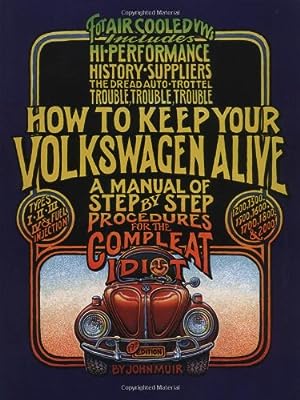 How to Keep Your Volkswagen Alive: A Manual of Step-by-Step Procedures for the Compleat Idiot: John Muir, Tosh Gregg, Peter Aschwanden: 9781566913102: Amazon.com: Books

First published in 1969, this classic manual of automotive repair equips VW owners with the knowledge to handle every situation they will come across with any air-cooled Volkswagen built through 1978, ...

And you need to have all the required tools (not that many) to do the routine maintenance if you want to use your antique VW (1930s design) as a daily driver. Or to keep it running, period.

Have you verifed that there battery voltage being supplied to the idle solenoid with the key on?

Try this. Unscrew the mixture screw all the way out. Clean the tip and spray down the hole. Then put the screw back in, be very careful here as you run the screw down. You want it to just touch the bottom so turn it with your fingers and go lightly. As soon as the screw stops, back it out 1.5 turns.

Start the engine and turn up the idle speed enough to keep the engine alive. Then turn the screw in until the engine starts to stumble, then as you back it out, count the turns until it stumbles again. Then go back in half of those turns, then back out 1/8th turn. Then adjust the idle speed to around 6-700 rpm.

texases, I don’t think I could have made it this far without it! It truly is the best book you can own for your VW. And yes, ok4450, the old solenoid never got that click when tested, so I thought bingo, that must be it. But I bought a new one and was disappointed to find out that wasn’t the solution. And keith, I’m going to have to try your method, I only adjusted the screw I did not pull it all the way out.

Since you have the manual, I assume it give pretty clear instructions on how to adjust the valves, right? As I understand it, valve adjustments are a CRITICAL part of maintaining an air-cooled VW.

It’s unclear to me whether or not the new idle solenoid clicks or not when unplugged and plugged back in.
If not, maybe the in-line fuse on the fan shroud is blown.

yes, it is very clear, and that’s the next task I am tackling tomorrow hopefully! ok4450, I posted on The Samba a couple weeks ago about this same issue, and someone suggested testing the solenoid by disconnecting the solenoid, turning the key to the on position, and then touching the wire coming from the coil to the solenoid and listening for a click sound. I did this with the original solenoid and no click, so I replaced it and now there is a click, yet no idle.

This all happened so suddenly, the car was non-operational for a while and I decided to tackle it and after a few weeks of tinkering I got it up and running. I was just taking it around the block everyday (it is currently not registered), and it worked just fine. Then one day I get in the car, fire it up and no idle and there is a distinct missing in the engine. So I’m wondering what could have happened so suddenly to change it?

The resistors are the plastic ends of the plug wires that snap onto the spark plugs. These can fail suddenly at any time and can be tested with an ohmmeter. They should read out at about 1000 ohms.

It’s difficult at this point to know if it’s a cylinder specific miss or general miss due to an air leak or carburetor problem.

Visit thesamba.com. There are a bunch of guys there that are experts on ACVWs.

Ok, so upon adjusting the valves I may have discovered the problem? Adjusting the intake valve for cylinder 1 yielded this beauty (pictured) a broken adjustment screw on the rocker arm, so I ran out and replaced it.

I have now adjusted the valves, timed it, played with the idle a bit and the car now runs. To me it still sounds like something’s wrong, but it stays alive. My VW has gone through so many different sounds I’m not sure which to believe is the right one! It runs at a higher rate of speed after the valve adjust and won’t give up as easily.

Sometimes it will idle endlessly for as long as you want and other times it will idle for a minute or two straight and die, which is a pretty long time. It drives a little wonky and bumpy, but I haven’t driven it long enough to tell if it’s just me or the car (I also live on a pretty steep hill, so it has to work to get around the neighborhood)

The real issue I have noticed thus far is that when put in gear (especially reverse) the engine drops in rpms significantly and there is a greater chance it will die and often does.
Also, I have heard conflicting reports of what to time your VW to. Some (most) say time it for 7 1/2 degrees before TDC if you have the 009 distributor like I do. However, in my How To Keep Your VW Alive manual, AKA the Bible, it says to time for 0 degrees (or Top Dead Center) in the 1969. Any suggestions?

Progress…have you done a compression check?

Yes, I agree Rod Knox. I have adjusted the valves twice now and each time it gets better and better. I’m just worried it might not be timed correctly and that’s the final issue. Not sure if I should follow other’s suggestions or go with the book.
I would like to do a compression check, but have not read about what I need to do just yet or how. Not sure if I need any special tools?