Recently, I had to cut out the resonant chamber just behind the exhaust manifold in my 04 Elantra as the pipe had disconnected and was extremely loud. I then added a new four inch pipe to reconnect the exhaust and I sealed it with a tape like substance that adheres to the pipe when heated created a semipermanent seal which solved the noise issue. However, the car is now spitting codes pertaining to the O2 censors and I’m wondering if cutting the resonator out could be the cause. I don’t see how removing the resonator would affect the O2 balance but then again, what do I know?
Any ideas would be helpful.
James

That’s not a resonator you cut out.

That means you won’t get your CEL off until you replace it. Seen on you tube, doesn’t look like your typical cat, but 02 sensor is just behind it.

Are you sure it’s a cat? The interior looked like a resonant and there is an obvious cat further down about half way down the length of the vehicle.

You cut out the primary cat.

What you see under the vehicle is the secondary cat. 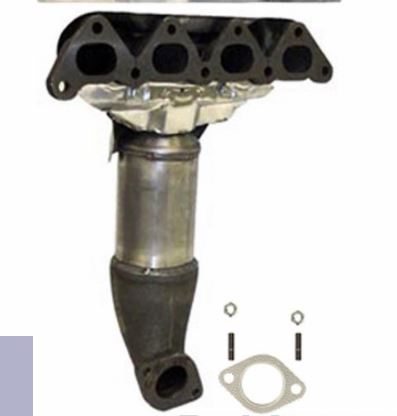 After some digging I determined it was the flex pipe portion of the exhaust I cut.

If all you cut out was the flex pipe, my guess would be you’ve still got a small exhaust leak where you repaired it, causing the check engine light for the 02 sensor.

What, exactly is this tape? Don’t describe it, give me a brand name.

You don’t permanently repair exhaust pipes with tape. You clamp it or weld it. The air leak is coming from where you taped it because the tape failed.

Even if you sort out the issue for the O2 codes, replacing a flex pipe with a solid pipe is going to cause issues down the road. There’s a very good reason that flex section is there in the first place…you can buy flex sections, why not just do it right?

Thanks for the replies. The item I used to seal the pipe is called Versachem tail pipe bandage which it stated was used for just such a problem. It adheres to the pipe and sealed as it stated it would as it warmed so it actually works. I will check for additional exhaust leaks and address them if found but to put any more time effort or money into this POS would be a waste. As long as it’s running like it should I’m ok with it. At 230k miles, it’s a means to an end at this point.

I looked at a diagram. What you took out was wrapped in metal fiber strap. Directly behind it is the downstream 02 sensor. If it wasn’t a cat, any leak whatsoever in your repair will cause a 02 sensor fault.

Pretty sure you hit the nail on the head. I’ll try and completely eliminate the leaks and hopefully that’ll do it and keep exhaust away from the cab.

Ask somebody knowledgeable at your local auto parts place to show you the parts and sealant needed to join exhaust system parts together so they hold under the jarring experienced by cars on the road, and don’t leak.

Tailpipe bandages are a temporary fix for TAILPIPES, the coolest part of the exhaust system. What you tried to use it on is much, much hotter and it doesn’t stand a chance of holding up. Either buy the right parts yourself or take it to your mechanic or a good muffler shop. You don’t save all that much money doing your own exhaust work anyway.
I gave it up 50 years ago but I still do my own brake jobs because they are easy and I don’t drop dirt or rust in my eyes doing them.

needed to join exhaust system parts together so they hold under the jarring experienced by cars on the road, and don’t leak

Any glued together, or even welded parts in that spot on the exhaust will be subject to the constant stress of engine movement and will crack pretty quickly. That’s why they have a flex section, to isolate the exhaust system parts attached to the vehicle body from the engine that rocks under loads. Cracks in that area have the potential to emit exhaust gases that can enter the cabin. Not a good scenario regardless of how long someone intends to keep the car. You can buy generic flex sections for around $20 or the proper pipe for this car for around $50. And then there’s no goofing around trying to farmer rig something up that is likely to fail again. Penny wise, pound foolish…

I know it’s been a while but thought I’d thank everyone anyway. The car has sat since I last wrote and I’m only now getting around to fixing the flex pipe and a few other things. I’ll take everyone’s advice and do it right. I try to live by the moto of do it correctly the first time. I’ll live that out here as well.