Mine is a genuine Ford Motorcraft engine with a good warranty and it looks like I am going to be able to use it. This pays for parts and labor so that is good news.

I heard that the “parts store” units are of questionable quality with a lots of hits but also a lot of misses as well. It only cost me $200 more to go with the Ford unit so it was a no-brainer for me.

Failure to flush or replace the oil cooler can void the warranty.

I do not know who remans engines for Ford but it could still be dicey even with a Motorcraft tag. Fred Jones was an early 1900s Ford Model A assembly line worker. He eventually became a large Ford dealer and at one point turned a huge building in OK City into a reman facility. They rebuilt everything there from alternators to engines/transmissions and shipped nationwide. And they even remanned transmissions for General Motors of all people.

Jones passed back in the 70s and the place was shuttered several decades ago. It’s now a hotel/club/restaurant/art gallery. Point is that it was non-union assembly line work and i know 2 guys who went to work there after they got downsized at another place. Neither one of them could or would even change the oil in their own cars and yet they were assembling things without really knowing how they worked. I have no idea who Ford has doing this type of work now.

Still, cool old building. Used to be the Model A assembly plant back in the day. 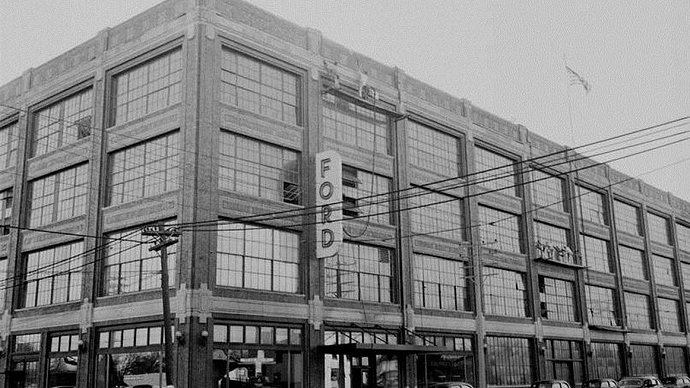 I like those old industrial buildings as most people seem to these days. I am glad it lives on an an entertainment hub but hope COVID-19 doesn’t kill that.

I have heard that even the Jasper engines can be questionable so that is why I went with Ford. At least the warranty was the best of the bunch. I dropped this off at the shop this morning so will wait and see what I hear. Apparently they were backed up so it might be a couple weeks before they really dig into it. I think I will be getting a new engine but wouldn’t care if they redid the head unless that cylinder was washed down by not running correctly. I am thinking that cylinder has very little compression due to a bad valve or something. I don’t know if I mentioned but there is a noticeable wispy sound coming from the top of the engine around the intake. I figure the intake valve is bad or something. There is a definite miss from this thing and the power is definitely not balanced.

The engine is getting a P0300 (random misfire) and P0307 (cylinder 7 misfire) code with regularity. I figure cylinder 7 is the offending one and maybe it being out of whack is causing the other random misfires. These are the only two codes I have gotten since the replacement engine was installed.

Sounds like you got a lemon. An oil filter should remove any fine metal particles and some installed a magnetized drain plug to catch the bigger ones. If those fine particles are attracted to a magnet, something bad may be going on. Graphite is none magnetic but moly is magnetic.

Do you have a vacuum gauge? To me anyway, that is the simplest way of telling right off the bat whether or not there’s a mechanical issue, air leak, weak valve springs, or half a dozen other trouble areas. Just plug it into an intake manifold vacuum port or tee it in to another manifold vacuum source.

Takes a little playing around with the chart that comes with the gauge to read it properly but basically what you want to see is around 20" of mercury at idle with the gauge needle being rock steady.

The vacuum gauge is a good suggestion but I took the truck back to the shop and left it. At this point, the engine is going to be warrantied through the shop. They are getting the details of the engine and labor warranty (separate) ironed out and then will get the ball rolling on just replacing the entire thing.

If there is a lot of stuff in the oil it can cause the filter to plug and go into bypass mode! So It would be good to do the immediate oil change with filter of course. also flush oil cooler if it is after the oil filter in the oil flow system of the engine. Then cut open the oil filter you take off and examine the stuff the filter is catching! That will be illuminating and a compression check would be wise to clarify the cause of the misfire and codes.

Ralph , C Watkin has taken the truck back to the shop and he just waiting for them to make a decision .

Yes, the truck is in the shop with the warranty issues being taken care of by the supplier. Apparently the labor warranty is separate from the engine warranty.

The filter going into bypass is a possibility. It won’t be an issue with this engine but is something to consider for the replacement. Change the oil BEFORE this happens… I also plan to put some old magnets salvaged from a junk lawnmower flywheel on the oil filter to trap any magnetic particles in the filter.

I am guessing there was a scam post or something that got removed. Anyway I got a notification about a post and it was removed.

The truck is still in the shop. I might call for an update tomorrow.

If you do that, make sure the magnetic pull is strong enough on the other side of the filter’s metal case. Test with a piece of metal with similar composition and thickness.