Hey all, I know this is a terrible picture, but I’ve noticed there are two spots for hoses on the radiator that aren’t hooked up to anything. It’s a tight fit but I circled one of the connections. 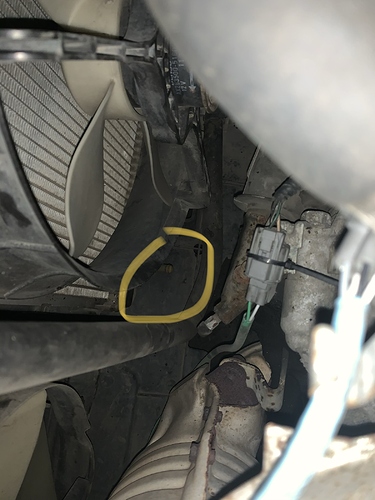 Do those serve a purpose? 1A auto has a video on YouTube about how to change out the rad and it looks like they disconnect some hoses from those two spots.

That’s where transmission fluid cooler hoses connect if the car has an automatic transmission.

You state the cooling fan comes on but does it cycle off after a bit and does the fan automatically come on when the A/C is turned on?

If the fan (A/C off) cycles off after a bit I wonder if there is a temperature gauge sender issue and the engine is not overheating as badly as you think.

That is not a proper test of course; just a precursor to proper testing.

I did the block tester fluid method of checking the head gasket and it was fine.

I had a major overheating incident yesterday with the gauge almost all the way up (just before the danger mark on the gauge) and blasted the heat the whole way home and it stayed very slightly high. I popped the hood as fast as I could with the heat back off again and the cooling fan was not on at all. So something is wonky there. Not sure where to start with that.

I think this model uses a 2 blade radiator fan sensor; or switch as it may be called. Unplug the connector and check to make sure power is provided with the key in the RUN position. If power is present jump the 2 terminals in the connector. This should make the fan run. If not, the fan motor may be defective.
If the fan comes on with this method but does not cycle on when the engine temperature gets up there then the fan sensor has likely failed.

Alrighty, well I caved and gave the car to a technician at work (I work at a dealership in the sales department). Before doing this, as I mentioned before, I replaced the fuel pump. The car still takes extra cranks when low on fuel. I’m gonna ignore that for now.

He went over the cooling system and found it was somehow low on coolant despite the fact that I overfilled it after I replaced the thermostat. We checked the car over and didn’t see any coolant leaks, but the car leaks so much oil it’s hard to see much under there

He topped off the coolant with a funnel into the radiator cap and LOTS of air bubbles showed up. He also replaced the coolant temperature switch thing near the thermostat and the radiator fan consistently comes on correctly now, where it was kinda off and on whenever it pleased before.

The car STILL overheats. The only things we could think of being issues are the water pump or the head gasket. The timing belt was done 40K ago and I would assume the water pump was as well, but it wasn’t mine back then and the CarFax doesn’t show which shop it was performed at at the mileage on the Continental timing belt sticker on the valve cover. For all I know, it could be some cheapo water pump. The car makes too many ugly 90’s noises to hear if it’s broken, but I don’t have any coolant on my driveway. Is the block tester fluid test not concrete for testing a head gasket?

I don’t plan to own this car much longer as it’s just falling apart from neglect, but I’d like to at least know what’s wrong so I can disclose it in the ad when I sell it.

You are planning to sell it. Do it.

Sorry to bump this again. The car has an external head gasket failure. Coolant is leaking down the back of the block, hence no mixing of the coolant and oil, but I’m losing coolant. Will just have to sell as-is. Thanks for all of your help and patience everyone.