Calling for help one more time

Car:
Toyota Avensis Verso 2,0 D4-D (It’s a diesel and that*s the name in DK, picture of model at the bottom) Mileage around 280k miles
Problem:
Warning light for charging, fuel filter and low oil LEVEL is on.
Diagnose so far:
Measured voltage on battery with engine off - 13,0 V, at idle, no load - 13,4 V, with max load - 13,2 V.
At 2000 rpm - no load - 13,9, max load - 13,7.
Judgement: Alternator dead.
Used one fitted. All measurements the same. New one fitted. All the same although figured out that it is putting out an substantial, albeit unknown amount of amps. I can’t get to a wire to test it. All fuses are tried and testet and all connections as well, found nothing.
It’s a friends car and I’m trying to help, but I am truly in deep waters with this as this is way too new for me.
If info is missing, call for it.
Any suggestions as what to test/search for? 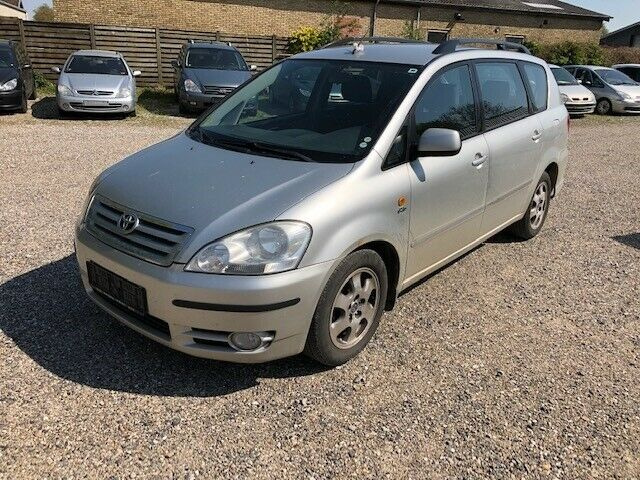 What is the noise you hear when trying to start your car? rapid clicking with all dash lights turning on? Car turns over but doesn’t start?We need to know all these things.By the way,what year is your Avensis?

What is the noise you hear when trying to start your car?

The car is behaving perfectly as it should, no bad noises.

rapid clicking with all dash lights turning on?

No clicking, all lights work.

Car turns over but doesn’t start?

Starts within half a second with the 95 amp/830 CCA battery cold or warm.

Only problem that has shown up now, with mounting of the new alternator is a slight whine from the tensioner when we put a load on it. That is how I got to the conclusion that it is putting out amps as I can regulate the whine with different loads.
The car is doing all-right and the battery voltage is a steady 13 volts. The only problem is (besides the tensioner) those 3 lights and the charging voltage being too low. In my world, they should still be going off at 13,9 volt. And why is it the fuel filter warning and oil level light. I’m thinking a short somewhere or the “brain”, but I would prefer I am wrong.
Oops. It’s a 2002.

Get a charging system monitor.Its a simple device that plugs in your cigarette lighter.It will tell you in real time what is going on with your entire charging system.I bought one a few years ago and it really works.

Thanks a bunch for the link, but he allready has such a thing connected and it only confirms my own measurements so we haven’t gotten any closer to a conclusion. I’ve also thought about a malfunction in the instrument cluster, but I don’t have a clue as to whether that is a possibility or not.
As I wrote, I’m in deep trouble here with this electronic crap.

One more thing you can try…remove the negative lead on the battery and leave it off overnight.Next day,reconnect the battery and see if the check engine light has turned off.This work 50% of the time.Sometimes,a whine is caused by a weak tensioner causing the serpentine belt to be loose.It could cause the belt to slip and some idiot lights to appear in the instrument cluster.

A very good idea indeed and I will will tell him to do that, however the check engine light goes off as soon as the engine starts. Only the battery light, the fuel filter light and the low oil level light remains on after the engine is started and the voltage is low.
Edit
I may have a chance to test an identical car tomorrow with regards to the voltage with the engine running.
Also, tomorrow I’ll have a code reader and check for codes, but I don’t think there’ll be any.

My guess is that you have a weak tensioner causing the belt to slip and turning on the idiot lights.My Toyota had this problem in the past

have you actually checked the oil level?

this very easily could be 3 different and unrelated issues.

have you actually checked the oil level?

Is the fuel filter an idiot light, or a reminder for service light?

It’s working on back-pressure (high resistance in the filter) and the filter is about 2 months and less than 3k miles old and is clean. we took it off and checked it. What a bastard to get to.
Good idea, I appreciate it.

this very easily could be 3 different and unrelated issues.

That has crossed my mind, despite the fact that the problem started last wednesday with the 3 lights started to flicker simultaniously at same time and from thursday stayed on permanently.

Btw. Whether the connection to the oil level indicator is on or off, the light is on.

Sometimes manufacturers will purposely turn other warning lights on that aren’t involved w/the problem, as a fail-safe. For example on my Corolla the alternator and brake warning lights both come on, even though only one of them is the problem. This is sort of a back-up for problems that require immediate att’n, in case a dash-bulb burns out. So that’s one idea, the problem isn’t the alternator at all. Instead it is the fuel filter or the oil level. Since the oil level is known to be ok, maybe the problem is the oil level sensor device, or its connector has come loose.

The way I test the alternator is to start with the car sitting unused overnight. The next morning the battery should measure about 12.6 volts. Immediately after starting the engine, 13.5-15.5 volts. When you tested the battery it measured 13 volts, which meant it had just recently received a full charge. So when you start the engine the alternator won’t put out much voltage, b/c that isn’t needed with a fully charged battery, and doing so would overcharge the battery. Letting the car sit overnight will put the battery in a slightly discharged state, which is what you want for testing purposes.

Update
Problem found. Had to send it to an auto-electrician. He found a broken wire for the alternator inside the main harness. He’d seen the problem before on Toyota’s and knew where to look. Voltage now is 14,4 no load at 2k rpm and 14,1 with everything turned on.