P2138 pops up on my Buick with reduced engine power and traction control warnings. It seems to happen only when it’s raining or has recently rained, and more frequently (maybe two or three times a month) in the spring when puddles are everywhere. After reading another thread where someone’s leaky sunroof was causing this issue it seems pretty plausible that water is the real culprit and driving through the rain right before losing engine power is not just a coincidence.

Whenever I get this code I pull over, clear it, and restart the car to clear the traction control warning. After that it seems like I’m good until the next big rain storm. BUT, how do I fix it “permanently”? Throttle body and pedal have both been replaced.

There is a big electrical connector in the left kick panel or firewall. Water is getting in and shorting the wiring. The water intrusion needs to be found and fixed. The connector and contacts may need to be cleaned.

It won’t take expensive parts to fix but it will take significant labor and a mechanic willing to work under the dash to fix it.

If you don’t fix it, the corrision the leak causes will eventually cause the problem all the time.

This is likely your problem and solution:

The other day, my wife told me there was something wrong with her car (2012 Chevy Malibu). The “Check Engine” light was on, the odometer area was reading"engine power reduced", “service ESC” , and “service traction control.” The only error code was P2138, a throttle-by-wire error. There was water on the headliner and floor, and the storage bin on the dash next to the driver’s door was completely full of water. Fearing the worst, I made an appointment with my mechanic. But I also did some sea…

Sounds like a lot of hunting to find where the leak is. I don’t have a sunroof so we can eliminate that as a possibility.

Maybe a plugged drain in the front cowl, in front of the windshield?

Do you mean that hard plastic mesh under the wipers? If so, I keep them pretty clean. If not, you’ll have to be more specific.

Yes, that’s it, if lots of small stuff gets through the mesh it can clog up the drain below, water then backs up and can leak into the passenger compartment.

I bought the car with some minor body damage on the driver’s side. Can’t help but think somethings barely funked out of whack and a little bit of water is getting through some god-forsaken place that’s going to be a pain in the rear to find.

At the least, find that electrical connector and check for moisture. If it’s wet, dry it out and figure out a way to divert water away from it. There should be an access panel on the end of the dash, accessible when you open the door. Then clear the code.

I found AN electrical connector inside A panel, that one you can pry off inside the driver’s side door. Let’s just make sure I’m not off my rocker here: 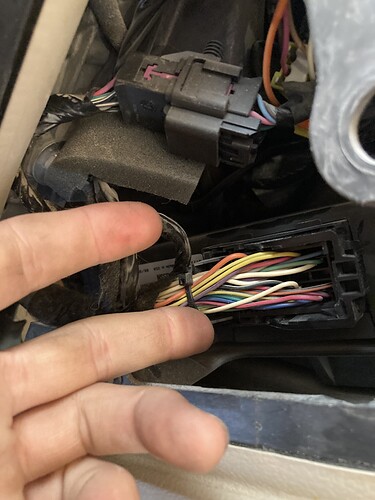 Disconnected and inspected all visible connections in this picture. No evidence of what I would call corrosion. Pretty dusty though, I drive through a lot of country. I blew it out with the air hose.

That’s in the dash. not the door, right?

Not enough wires to be the connector in question. The connector is a BIG one going through the firewall connecting to the engine harness and ECU, I believe.

And you are looking for a damp one, not a dusty one.

In the dash, yes.

It’s 90 and hasn’t rained in a week, nothing is damp. Maybe I’ll have to get the hose.

No signs of water in the area, so you are going to have to do some more detective work. Check the connections at the accelerator pedal and the throttle body.

Throttle body connection looks like it might have been wet in the past. No real corrosion. Are dielectric grease and tape safe options?

Yes. But clear the code and see if it returns. You may have a problem with the throttle-by-wire system unrelated to the rain.

We’ll see how it goes. Thank you.