I don’t think they want to do this repair

I think that is probably true. Your vehicle has become close to the end of it useful life . They are woried that they will find more problems and then be stuck with a broken vehicle that you don’t want to spend anymore money on.

For what it’s worth if I did the repair I would take it to this mechanic. I trust them and I have consistently had them work on the car. However, I don’t think they want to do this repair

Well, there you go. A mechanic you trust doesn’t think the car is worth fixing. Either trust him or find a new mechanic.
As for replacing your Golf, forget wanting a Golf/Fit. You’re not in a position to be picky. Find something in decent condition and set aside as much as possible for repairs/deferred maintenance because it will probably need both. Best of luck.

the head gasket was diagnosed: the mechanic found hydrocarbons in the tailpipe (up to 175)

Just a diy’er here, I don’t think that’s a common method for diagnosing a faulty head gasket. If the failure was allowing coolant into the combustion chamber, seems like that would increase the amount of hydrocarbons in the exhaust, due to incomplete combustion. So maybe that method is more common than I thought. Similar to how making a campfire w/damp wood results in a lot of smoke. Calif allows up to 130 HC on my Corolla (IIRC) and still pass emissions, so 175 seems somewhat high, but not super high.

This car sounds like the classic definition of a “beater”. I would guess that the OP has become so used to all the things wrong with this car that he doesn’t even notice that he’s now driving a junker.

On mine that classic symptoms were bubbles in the radiator, and the temp gauge spiking, then coming down again, then spiking.

For those wondering how the head gasket was diagnosed: the mechanic found hydrocarbons in the tailpipe (up to 175).

That is not the way to diagnose a head gasket. Definitely get another opinion on that. And find a competent mechanic.

the mechanic found hydrocarbons in the tailpipe (up to 175).

To a diagnose a head gasket leak, one sign is HC coming out of the open radiator. Bubbles in the coolant are another sign: they would be exhaust gasses that get into the cooling system due to a head gasket breach. Exhaust gasses have unburned HC in them. There is also a chemical test of the coolant.

Guessing OP may have mistaken “radiator” for “tailpipe” during the discussion w/shop.

The coolant reservoir would be the place to check for hydrocarbons as Volkswagens usually don’t have radiator caps, vehicle owners and message board members sometimes miss the details. 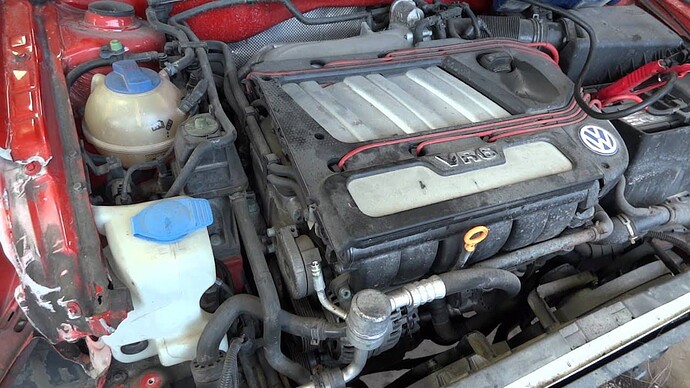 Thanks all for your feedback - after reading through your posts I decided to take the car to another mechanic for a second opinion. He replaced the thermo switch and now the car is running fine - no overheating. Just over $200.

What a week - after looking at car prices and considering the alternatives I couldn’t be happier. I know it’s a junker, I know I need to let it go but at least I can let it go when the car market becomes a little more reasonable!

eplaced the thermo switch and now the car is [not overheating]

I presume that’s the switch that operates the engine compartment cooling fan. It would indeed be very unusual for a mechanic to fail to check the operation of the engine cooling fan(s) when diagnosing overheating problems. hmmm … Maybe that switch does something else?

If it is in fact the fan switch, I’ve had to replace a similar coolant-temp switch several times already on my Corolla. Must be difficult for some reason to design this sort of switch to be robust. Switch doesn’t carry much current on Corolla, b/c fan is operated by relay. So the non-robustness isn’t b/c the contacts are burning.

Glad to hear you got the issue resolved and at minimal expense. And you found a new, hopefully better, mechanic. Happy motoring.